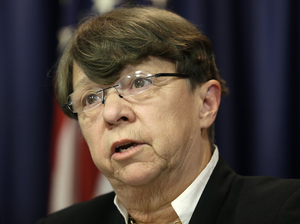 Securities and Exchange Commission Chair Mary Jo White, shown at a press conference in 2015, says she will step down in January.

Mary Jo White, the chair of the Securities and Exchange Commission, will step down in January, a move that leaves the future direction of the regulatory agency more uncertain than ever.

"It has been a tremendous honor to work alongside the incredibly talented and dedicated SEC staff members who do so much every day to protect investors and our markets," White said, in a statement released today.

"I am very proud of our three consecutive years of record enforcement actions, dozens of fundamental reforms through our rule-makings that have strengthened investor protections and market stability, and that the job satisfaction of our phenomenal staff has climbed in each of the last three years," she said.

A former U.S. attorney, White is known as a moderate who tried to navigate a politically divided agency known for internal battles.

Under her leadership, the commission implemented most of the rules stemming from Dodd-Frank, the landmark financial overhaul law passed in the aftermath of the financial crisis, the Wall Street Journal reported:

"During Ms. White's tenure, which began in April 2013, the SEC overhauled the regulation of money-market mutual funds, credit-rating firms, stock exchanges, and electronic trading venues. She frequently navigated political infighting at the SEC to complete Dodd-Frank requirements, and such friction could continue under a Republican chairman."

But White was sometimes criticized by liberals such as Massachusetts Sen. Elizabeth Warren for not pursuing Wall Street wrongdoers more aggressively.

With White gone, the commission which is supposed to have five members will be down to just two people, one Democrat and one Republican.

While President Obama has nominated two additional commissioners, the Republican-controlled Senate has refused to vote on them.

President-elect Donald Trump is expected to have an easier time getting his nominees approved.

Trump is expected to pursue a more conservative approach to regulation than his predecessor, but hasn't spelled out what he will do, beyond repealing Dodd-Frank.

The heads of other financial regulatory agencies are widely expected to follow White out the door by announcing their departures over the next few weeks.