88.5 WFDD, Public Radio for the Piedmont, is the only public radio station of its kind located in the Piedmont Triad. We broadcast news, information, and public affairs programming covering the arts, people, and institutions in the area.

We are the state's charter NPR® member and the longest continuously broadcasting public radio station in North Carolina. WFDD is a member of the North Carolina Public Radio Association. It is a broadcast service of Wake Forest University.

88.5 WFDD has a listening area covering 32 counties in North Carolina and Virginia. 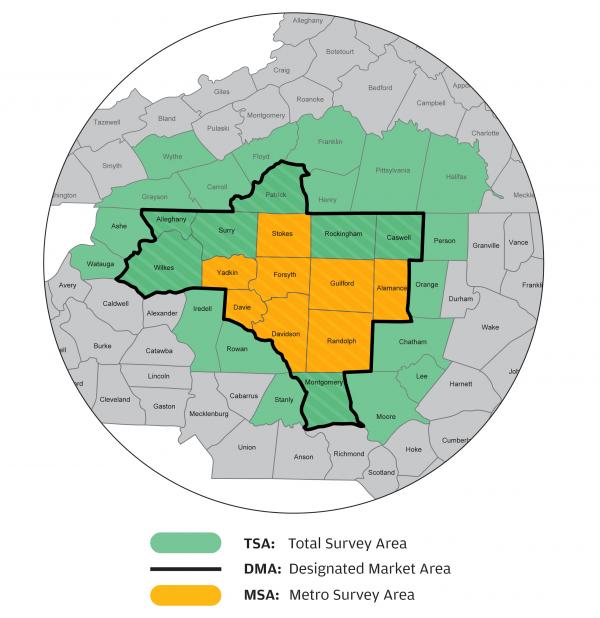 88.5 WFDD enriches the lives of our listeners in the Piedmont Triad and surrounding areas by producing and distributing programs and services that inform, inspire, and entertain.

88.5 WFDD will be the most respected source of news and information in the Piedmont Triad, Northwest North Carolina, and Southern Virginia communities. We will be an indispensable community asset, working collaboratively with regional groups and organizations to further a deeper engagement with the community, and supporting arts and culture throughout our region in ever-growing and more significant ways. We will build a strong and competitive education program to engage the regional student population. We will commit ourselves to maintaining relevance in a changing environment.

WFDD is a unit of Wake Forest University, which, like many other institutions of higher education nationally, views broadcasting as participatory in the mission and work of the University through provision of services to the public, which are educational in the best and broadest sense. Wake Forest has nurtured and supported WFDD from its inauguration, and WFDD is an integral part of University planning for the future. Public broadcasting is rooted in the constitutional guarantees of a free press and free speech. The Radio Act of 1927 articulates the basic policy that broadcasters operate in "the public interest, convenience and necessity." Thus, Wake Forest University holds a federal broadcast license for the purpose of providing services for the public.

Public broadcast stations are qualified by the Corporation for Public Broadcasting and are subject to a variety of federal and state statutory and regulatory requirements. Wake Forest University and WFDD are jointly committed to respect and follow the business and legal frameworks within which our station operates.

In providing its public service, WFDD produces and broadcasts a wide range of programming of the highest professionalism and quality. The University is committed to maintaining the full confidence of the public in the editorial integrity of out news and programming, and to assuring all citizens that station management has the freedom necessary to provide WFDD's services effectively. Editorial integrity in this context is defined as the responsible application by professional practitioners of a free and independent decision making process ultimately accountable to the needs and interests of all citizens.

We recognize that as surely as programming is WFDD's purpose and the product by which our audiences judge the value of the station, that judgment continues to depend upon their confidence that our programming is free from undue or improper influence. We underline the importance of this issue and reaffirm University support and assistance to WFDD so that the station continues to meet this criterion in a responsible and efficient way.

In keeping with our responsibilities, the University will:

"This is station W-A-K-E coming to you from the campus of Wake Forest College in Wake Forest, North Carolina…"

With these words, a radio station was born. In the fall of 1946, Alva "Al" Parris and Henry "Randy" Randall, began broadcasting--illegally--from their rooming house.Their early five-watt broadcasts only covered an area of about 300 feet in all directions--students in the girls' dormitory could barely hear the station. Over the next year, as students pushed for better broadcasting range, college president Dr. Thurman D. Kitchin and faculty advisor Dr. Marc Lovelace helped establish WAKE as an official campus radio station. Students successfully raised the necessary $200 start-up funds, and by spring of 1948, the station had its FCC license.

Brothers David and Ralph Herring, Jr. built the first 50-watt transmitter, relying on diagrams found in a book about electronics and on the advice of a Raleigh radio engineer. On April 19, 1948, chief announcer Roland C. "Woody" Woodward was joined by President Kitchin and student body president Horace "Dagwood" Kornegay as the "Voice of Wake Forest" hit the airwaves. As it turned out, the original call letters WAKE were already assigned to another station. Within the month, the fledgling station's call letters became WFDD, which stands for Wake Forest Demon Deacons.

For the next ten years, WFDD was completely a student-run station.When Wake Forest College moved to Winston-Salem in 1956, WFDD moved as well. Early programming included classical and popular music,programs by faculty members, an hour of devotional material each week, some campus sports, news, and a nightly broadcast of the "Deaconlight Serenade -- beaming musical good cheer to you and yours, styled Wake Forest way." Visit the Deaconlight website

In 1958, Dr. Julian Burroughs, who served as student station manager in 1950-51, returned to the station as the first non-student station manager. Burroughs served both as a professor in the Department of Speech Communication and Theatre Arts at Wake Forest University and as station manager for WFDD until 1981. During this tenure, WFDD became a non-commercial educational FM station in 1961. Local listeners helped raise money for the addition of a new antenna and 36,000-watt transmitter in 1967, making WFDD the first FM stereo station in Winston-Salem. WFDD became a charter member of National Public Radio - the first in North Carolina - in 1970.