Outside Reno, in Nevada's high desert, Tesla is building what it says is the world's largest battery factory. The Gigafactory, as it's called, will churn out batteries for the company's electric cars. But it's also making something new — a battery for the home.

Tucked away in a dusty valley near Sparks, Nev., the Gigafactory is kind of like Willy Wonka's chocolate factory: It's mysterious, it's big and few people have been inside.

Actually, "big" may not do it justice.

"It's really hard to get a sense of scale. I mean, it's huge," JB Straubel, Tesla's chief technical officer, says while standing on the roof of the factory — the 14 percent of the Gigafactory that's been built, at least.

We're looking down at a flat stretch of land where the rest of the Gigafactory — with an estimated price tag of $5 billion — will go.

Like Willy Wonka's factory, there's a lot of hype around this place. People have been caught sneaking onto the property to see what Straubel says, at 5.8 million square feet, will be a building with one of the biggest footprints in the world.

"I'm not a huge football fan, but I think it's on the order of around 100 football fields," he says.

Nevada beat out several states by offering an incentive package worth more than $1 billion. State lawmakers are watching like hawks for the economic benefits, such as making sure Nevadans make up a big part of the factory's 6,000 workers.

Inside the factory, in room after room after room, workers are welding steel, pouring concrete and installing highly specialized machines, shrouded in plastic. 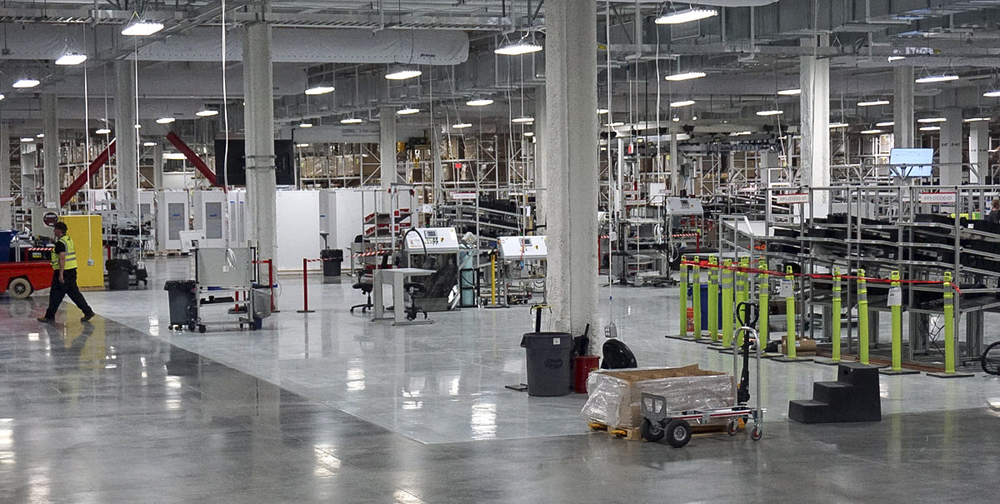 The production line at Tesla's Gigafactory is already operating for the Powerwall, a battery designed to store electricity from solar panels in average homes.

One room is filled with huge metal tanks, like an insanely large industrial kitchen. It's where the raw materials are mixed together. In other rooms, the fully formed pieces of the battery, called the anode and cathode, are baked in huge ovenlike machines, several hundred feet long.

According to Straubel, the equipment in the factory will double the world's capacity to make lithium-ion batteries. Tesla hopes to produce 35 gigawatt-hours of energy storage annually, which could supply 500,000 of its electric cars.

"It's not just about building a lot more batteries but it's about reducing the cost," Straubel says.

Tesla is known for pricey electric cars, and batteries are a big part of the sticker price. And that, Straubel says, is why this factory is all about scale. Scaling up could drive down the cost of batteries 30 percent or more, he says. Battery packs in most electric cars are estimated to cost more than $10,000 today.

"Our vehicles can be more affordable. More people can have access to them," Straubel says.

That's the company's goal with the new Model 3, Tesla's first mass market car, announced last month. The Model 3 will start at about $28,000 after the federal tax credit.

"We have today over 325,000 reservations for Model 3, representing this enormous backlog of orders," Straubel says.

Those are orders that Tesla can't fill if this factory isn't up and running.

One room over, part of the factory is running, but it's making something else: the Powerwall. The flat battery, about 4 feet tall and 3 feet wide, is Tesla's first battery for residences.

"If someone has solar on their house and they install a Powerwall, what this lets you do is store your surplus solar energy," Straubel explains.

This is Tesla's ultimate vision: an electric car in your driveway and a Powerwall — priced starting at $3,000 — in your garage. It's a future free of fossil fuels, Straubel says.

Tesla is also making a larger version of these batteries called Powerpacks, about the size of a refrigerator, that can be used to store electricity at factories, industrial sites, or by electric utilities. 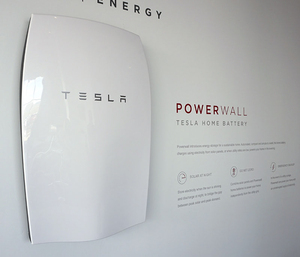 The Powerwall, a battery designed to store electricity from solar panels in average homes.

Severin Borenstein, an energy economist at the University of California, Berkeley, agrees that it would be "a game changer for reducing greenhouse gas emissions." The question, he says, is whether consumers will buy into Tesla's vision.

Take that $3,000 home battery. Electric rates in many states make it hard to actually save money storing your own electricity.

Some solar customers are paid by their electric utilities for the extra solar power they put onto the grid, a policy known as "net energy metering." That creates little incentive to store solar energy at home.

A battery could help someone save money if his electricity costs a lot more at night than it does during the day. Borenstein says few states have those kinds of electricity prices.

"Average households are not going to get much or any value from these batteries," Borenstein says.

Early adopters may not care, though.

"They're people who like that and feel good about it and they're mostly pretty darn rich," he says.

Tesla CEO Elon Musk is betting that cheaper batteries will make everyone else want a home battery and electric car, too, which could finally lead the company to profitability.

"Is Elon Musk far-seeing and investing in the future?" Borenstein asks. "Or is he making big bets that could all collapse at once?"

The Gigafactory is exactly that gamble. If Tesla stays on schedule, it'll be fully open in four years.

Encore: She inscribed 120,000 pennies with a pandemic message. Is one in your pocket?

The Senate has approved roughly $40 billion in aid to Ukraine

Only 1 human disease has ever been completely eradicated: Smallpox