Gaza's Surfer Girl Hangs Up Her Board — And Not By Choice

It looks like Surf City, USA: White sand beaches that stretch for miles, sunshine, a soft breeze and some pretty gnarly waves.

But this is not California. It's the Gaza Strip. This coastal Palestinian territory is more famous for conflict with Israel. Visitors have to pass through military checkpoints to enter the strip, and Israeli drones often buzz overhead. There are piles of rubble from years of war.

But Gaza also has a 25-mile Mediterranean coast and a small local surf scene.

"Once I paddle out past the breakers — I forget my troubles," says Ali Erheem, 25, a member of an informal group that calls themselves the Gaza Surf Club. "It's pure happiness." 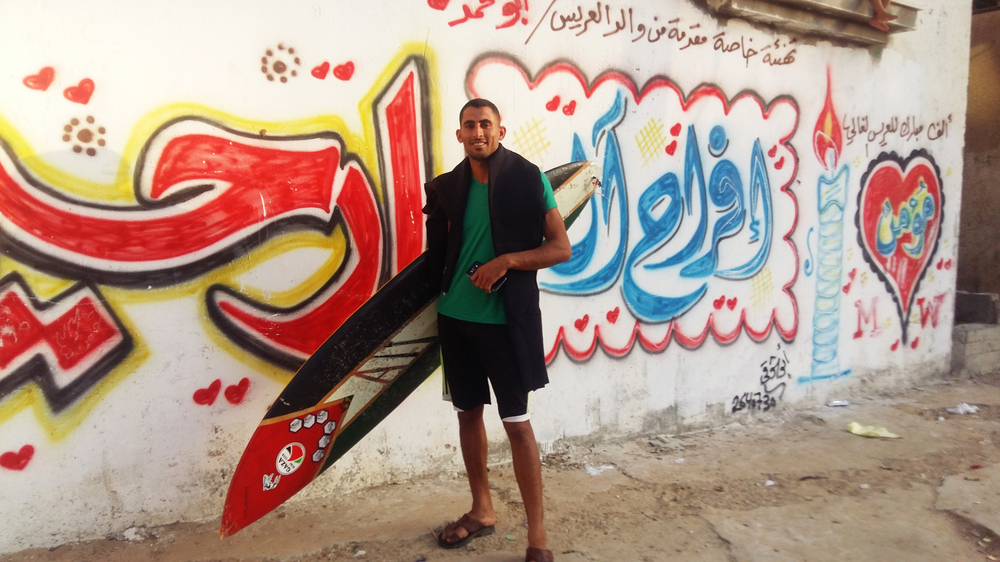 Ali Erheem, 25, poses next to graffiti on the front of his family's house in the Gaza Strip. Erheem is a member of the informal Gaza Surf Club. His painted his secondhand surfboard to look like a Palestinian flag.

Out of about a half-dozen surfers on the beach when NPR visited, all were young men. But probably Gaza's most famous surfer is a young woman: Sabah Abu Ghanim.

Abu Ghanim is featured in a German documentary called Gaza Surf Club that's making the rounds at film festivals this year. She started surfing at age 5. But now she's 17, and this past summer may have been her last out on the water. She's quitting the sport, under pressure from her parents.

Having finished high school, she spends most of her days now at home, inside a simple cinderblock house, with 11 relatives. It faces the Mediterranean Sea.

During NPR's visit, Abu Ghanim giggles nervously, flanked on the sofa by both parents. She wears a loose black headscarf and a teddy bear sweatshirt. Her parents have arranged for her to be married this month. 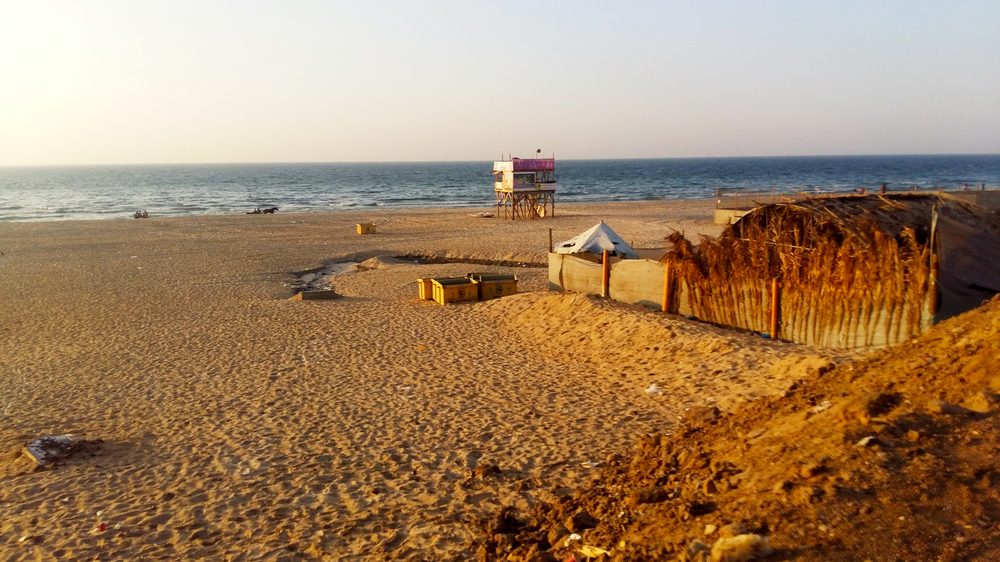 One of the surf beaches along Gaza's 25-mile Mediterranean coastline, with a lifeguard station.

Palestinian women have more opportunities than women in many other parts of the Middle East. Many work, own businesses. A handful do play competitive sports.

But Gaza is conservative and is run by the Islamist party Hamas. Many families, like the Abu Ghanims, have traditional ideas about women's roles. An older sister had to quit surfing a few years ago, when she too got married.

"When girls are young, nobody objects. In fact, I taught them to surf," says the father, Rajad Abu Ghanim, a lifeguard and boat repairman who says he used to be an avid surfer himself, before an injury to his legs.

He says he saved up and spent three months' wages on a secondhand surfboard from Israel for use by the family.

"But as Sabah matures, it's just no longer appropriate," he says.

While her father goes to fetch his surfboard, and her mother fixes tea, Sabah Abu Ghanim finally speaks.

"I wish I could go back to being a child," she says. "That's when I felt most free — surfing." 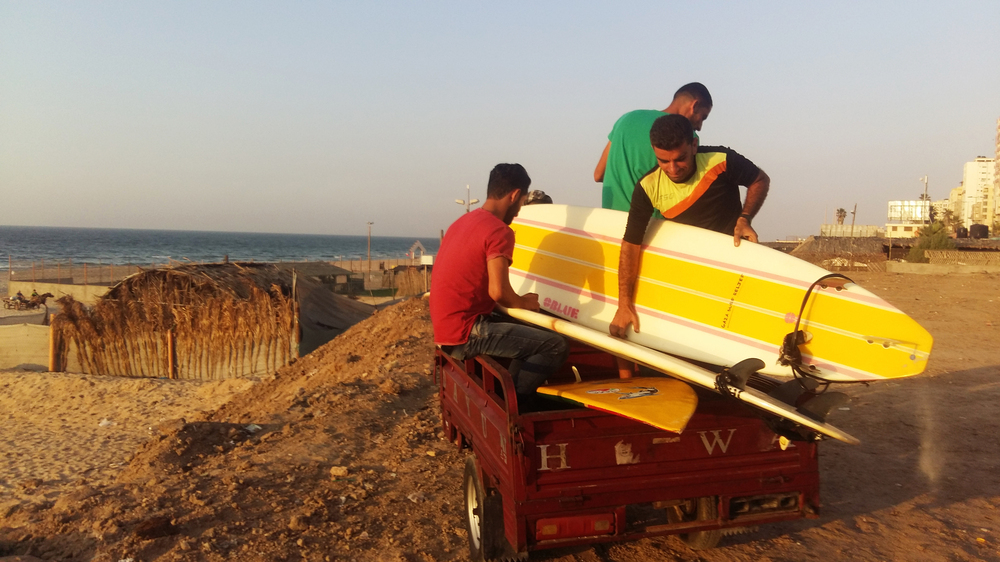 Members of the Gaza Surf Club drive a tuk-tuk down to the beach, to carry their surfboards.

She says doesn't want to grow up. She dreams of teaching other girls to surf. But she acknowledges that's probably impossible, since she'll soon be a wife, moving into her mother-in-law's house — still in Gaza, but inland.

For the first time in her life, she won't wake up to the sound of the waves.

A day later, back at the beach, members of the Gaza Surf Club gather within view of Abu Ghanim's house. Her door is closed.

Some of their boards and wetsuits have been donated. But otherwise these guys are typical surfers and friends, teasing each other about catching the wrong wave, and trading news about the winners at recent surf competitions in Hawaii and France. They too would love to compete abroad, but permission from Israeli authorities to travel is difficult to get. 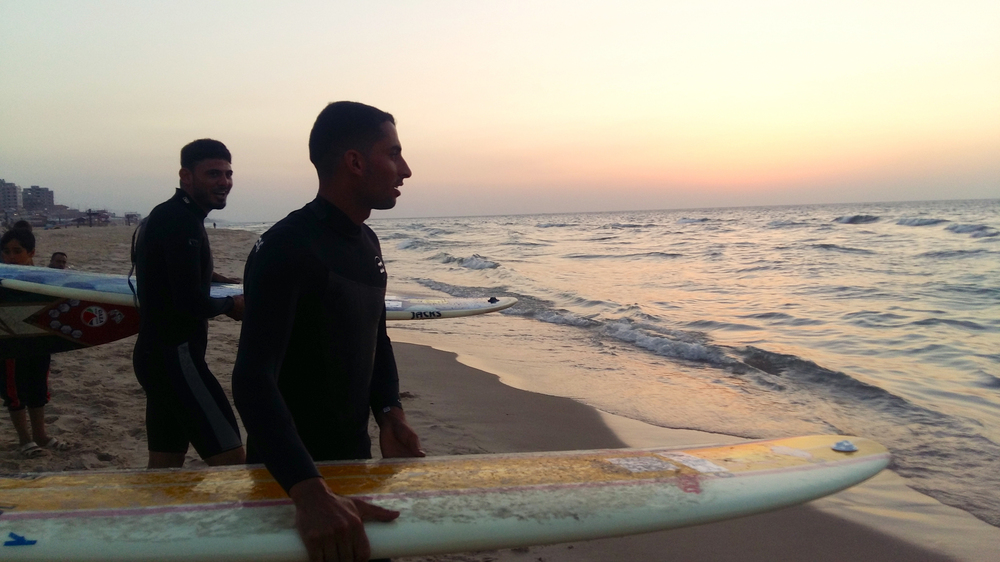 Ali Erheem (center) and his friend Tareg Naem get ready to plunge into the water at sunset in the Gaza Strip. They are members of an informal group of friends called the Gaza Surf Club, which was featured in a German documentary this year.

"We love the American surfer Kelly Slater. We always watch YouTube videos of him, and try to copy what he does," says Tareg Naem, 24.

As the male surfers wiggle into their wetsuits, a gaggle of neighborhood children gather around to try to help them carry their boards. The kids dash around in the sand, like little assistants.

Among them, peeking out from behind a big yellow surfboard, is one little girl in pigtails.

Avoiding the tap water in Jackson, Miss., has been a way of life for decades