In the language of the Crimean Tatars, the word musafir means "guest." It's also the name of one of Crimea's most popular restaurants. But that name took on added significance when the Tatar outpost relocated to the Ukrainian capital of Kiev in May of last year.

According to Sorina Seitvelieva, who owns the restaurant with her sister-in-law, Emine Emirsalieva, Musafir was forced to cease operations in the Crimean city of Bakhchyserai after Russia orchestrated an armed takeover of Crimea in March of 2014. The restaurant was closed just as the pair were opening Musafir's second location in mainland Ukraine.

This "guest" in peaceful Kiev had become a kind of asylum-seeker.

Crimea's Tatar population, which endured mass deportations during Stalin's reign of the Soviet Union, is once again subject to persecution at the hands of local authorities. Seitvelieva says armed and masked policemen searched the original restaurant three times before shuttering its doors — while other restaurants in the area remained unscrutinized.

But that's awakened a burgeoning interest in Crimea and Tatar culture among Ukrainians and tourists. And guests have flocked to Musafir at its new home in Kiev, located just a 20-minute walk from Kiev's Independence Square. It has become one of the city's most popular restaurants.

"We sort of caught the wave," says Seitveliev.

Business has been favorable for Musafir in Kiev since day one, according to its owners. "Interest towards whatever is Crimean Tatar was part of it," Seitvelieva says.

But since then, Emirsalieva adds, visitors have begun to flock to the restaurant for a different reason: "Now ... they come because they like to eat."

Far from the varenyky and borscht typical of chilly mainland Ukraine, Musafir's menu speaks to the temperate climate of the Black-Sea peninsula, with many of the staples and flavors Westerners expect of Turkish cuisine: pastries — sweet and savory — and flatbreads, grilled and stewed meats, stuffed nightshade vegetables, and fine Turkish-style coffee prepared with spices.

Musafir's specialty, however, is its very best seller: the cheburek, a thin, deep-fried pocket of cheese, meat or mushrooms. At Musafir, chebureki are half the size of dinner plates, with elegantly crimped edges and a whisper-thin pastry exterior. 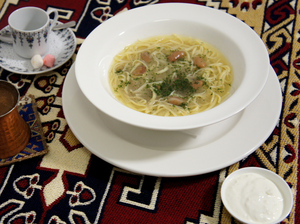 Musafir's menu features foods from the temperate climate of Crimea, with flavors resembling those in Turkish food.

Walk into Musafir for dinner without a reservation, and you're likely to be politely turned away. While many neighboring restaurants remain nearly empty in the midst of Ukraine's economic downturn, Musafir consistently draws a crowd of local businesspeople, who favor the restaurant for its lunch specials, and tourists who have ventured out of downtown Kiev in search of Musafir's famed coffee and kebabs.

"We have to open something else, because people are getting upset," Seitvelieva says with a laugh.

For Tatars who have migrated westward and the many Ukrainians who once spent their holidays on the Crimean peninsula, chebureki elicit nostalgia for a region that has grown increasingly violent and uninhabitable. They're also a hallmark of a population that is vulnerable to extinction.

The Crimean Tatars, an ethnic group with nearly a thousand years of history in Eastern Europe, are a Turkic-speaking people who traditionally practice Islam. In early 2014, the head of the Mejlis, the Tatar self-government organ, told Radio Free Europe that the group feared annihilation if the escalating tensions with Russia resulted in a partitioning of Ukraine. Since Crimea's annexation, the preservation of Tatar culture has become a priority for some activists in Ukraine, while human rights organizations have criticized Russia for the harassment, torture and murder of Crimean Tatars.

Donald Trump's victory in the U.S. presidential election could signal an even bleaker future for Tatars and others in Crimea, as well as for the rest of the Eastern European nation. The U.S. has played a key role in backing Ukraine against aggression, and many in Kiev fear that Trump's move to the White House could signal the loss of its greatest ally.

Emirsalieva, herself a Tatar, and Seitvelieva, a white Romanian married to a Tatar man, speak warmly of Kiev and its tolerant local culture, but they describe an increasingly bleak reality for the remaining Tatars in Bakhchysarai.

The two women still try to visit Crimea during the summer, but note that simple activities have become emotionally and bureaucratically challenging since the annexation.

Emirsalieva described having to fill out an immigration form for her 10-month-old son, born in Kiev, to travel from western Ukraine into Crimea. "Earlier there were no borders, and now there are. To me ... this was difficult," Emirsalieva says. "You have to cross the border to get home."

While beer and wine appear on the menu at Musafir, alcohol is not served during the month of Ramadan. Both of Musafir's owners share a vested interest in continuing to use the Tatar language and perpetuating the traditions of the ethnic group, in and out of the restaurant. They also both send their children to Tatar school on the weekends. Musafir hosts a twice-weekly performance by a Tatar musician and welcomes large families and religious groups who want to hold dinners at the restaurant.

"It's nice to see [guests] in the evening coming and bringing their families for some special occasions," Seitvelieva says of the Crimean Tatars who visit Musafir.

The EPA prepares for its 'counterpunch' after the Supreme Court ruling