Thousands of soccer fans chant and beat drums in the stands. An announcer narrates, on live radio, the start of the match.

Players from Gaza's top soccer league sprint and dive for the ball. Going for a header, two players collide — and one lands on the leg of the other.

What happens next has never happened in Gaza before: A woman in a pink Muslim headscarf dashes out from the sidelines. She's there to treat the player whose leg was injured.

In the West Bank and Gaza, female doctors, nurses and emergency medical technicians have worked pretty much everywhere their male counterparts do — except at soccer games. These are all-male events, often rowdy, which until now have used all-male medical teams — just as in much of the world. It's rare to see a female sports trainer at La Liga matches in Spain, for example, or even in England's Premier League.

But after another Arab country, Jordan, began employing female EMTs at its soccer games this year, Gaza followed suit.

Not everyone is happy about it.

"They have a problem that a female can touch the male [body] and do first aid," says Hanan Abu Qassem, 28, who in October became the first female EMT to staff professional soccer games in Gaza. She was the one in the pink veil who sprinted onto the field to treat the player with the injured leg. "But it's something ordinary for me." 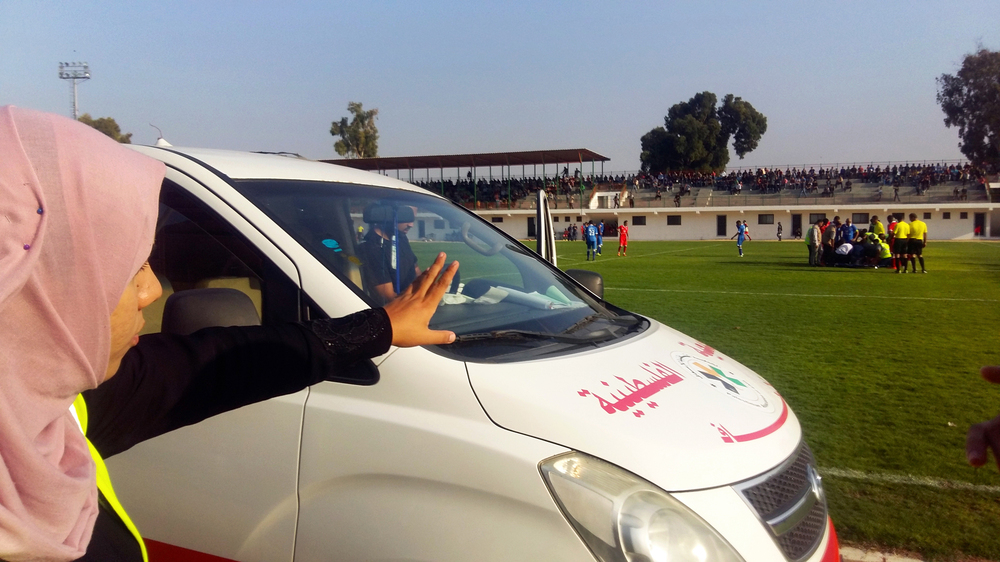 Hanan Abu Qassem motions from the sidelines of a top division professional soccer game in Gaza, poised to treat injured players. Abu Qassem is the first female EMT to staff such games in the Gaza Strip.

She's an experienced EMT, having treated victims of Israeli bombs during the 2014 Gaza war. Compared to that, soccer sprains and scrapes were supposed to be straightforward — more pleasant work, she says.

But at her first game last month, she and a female colleague were booed by the crowd — and lambasted on social media. Male soccer fans, offended by their presence, took their complaints to Gaza's soccer federation, which told Abu Qassem she might be locked out of future games because of the backlash, and for her own safety.

The backdrop of all this is an ongoing political struggle between the Islamist group Hamas, which governs Gaza, and Fatah, the party that runs the Palestinian Authority in the West Bank and is seen as more liberal. Injured players are treated by municipal EMTs here, who aren't required to be affiliated with any political party. They provide all medical care at soccer games, unlike in America or Europe, where private sports trainers, employed by individual teams, are often the first responders. 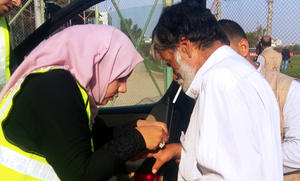 Hanan Abu Qassem (left) treats Kamal Bahoum (right), a soccer fan injured during scuffles at the gate to Gaza's main soccer stadium. The presence of female EMTs at the soccer games has stirred controversy, and Abu Qassem has been warned she may be barred from future games.

"If I cannot enter the field, I may be crying," Abu Qassem says. "Because I have ambition. I'm anxious to be a very famous EMT."

She is already, because of this controversy. Before one recent match, as NPR accompanied her, guards initially prevented the ambulance Abu Qassem was riding in from entering Gaza's main soccer stadium. Amid scuffles and yelling, they acquiesced after the head of the Palestinian EMT Association intervened.

"I'm surprised to see a woman doing this job!" says soccer fan Kamal Bahoum, 59, with a white beard. He was injured during the chaos at the stadium gate as he tried to get in, and went to Abu Qassem in search of a bandage for his bleeding hand. In the end, he had no qualms about getting medical treatment from a woman, he said.

At the game NPR attended, there were no boos directed toward Abu Qassem — but there were stares. She says she dressed more conservatively than she does most other days, wearing a pink headscarf and a long, loose-fitting black robe with a reflective vest over it.

Only three women appeared to be present in the entire stadium of thousands — Abu Qassem, a female sports journalist, and this NPR reporter. 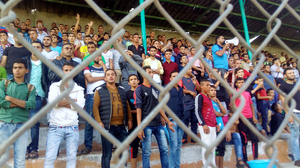 Many of the crowds at the soccer games Abu Qassem staffs are all-male, like this one from a recent professional soccer match in Gaza City.

"As female journalists, we face the same problems that they face," says Sabah Ahmed, a reporter for a Gaza sports website. "But day by day, the people start to deal with us. They are welcoming us. Actually, I'm surprised."

Abu Qassem ends up riding in the ambulance to the hospital with the player who hurt his leg. Turns out it was broken. She says she sat by his hospital bedside as he cried — not out of pain, but out of fear his soccer career would be over.

Later that night, local TV stations in Gaza replay — over and over again — footage of the player's injury, with his leg bent at an unnatural angle. It shows him being carried off the field on a stretcher. The report doesn't say who treated him.

But if you pause and look closely, you can spot a hot pink hijab in the background.