As Europe Closes Door To Refugees, Tough Choices For 2 Fathers

As Europe Closes Door To Refugees, Tough Choices For 2 Fathers

The wide, white tent pitched in the mud is filled with exhausted Syrians and Iraqi families crowded on cots. They have been camping out at the border between Greece and the tiny Balkan nation of Macedonia for weeks.

Moyaad Saad, a 43-year-old former civil servant from Baghdad, has been here since mid-February. He's cradling his infant daughter, Zahara, who is starting to fuss.

"I don't think she's hungry," says Saad, a burly, quiet father of five. "This little one cries only for two reasons: She either wants me to change her diaper or she needs fresh air. I wash her clothes. I make sure her bottle is full of milk."

Zahara is just 6 months old. Normally, she would still be nursing. But Saad's wife, Shereen, is in Sweden with their four older children. The family fled the conflict in Iraq and paid smugglers in Turkey for passage to Greece.

"We left Turkey on two different boats," Saad says. "The smugglers put my wife and four of the kids on one boat. Zahara and I got on a second boat. At sea, the Turkish police stopped our boat, but not the one my wife was on."

Shereen arrived on the Greek island of Lesbos in late January and proceeded north. But by the time Saad and Zahara managed to make the sea crossing a couple of weeks later, European borders were closing to migrants.

Now Saad and Zahara are stuck at a sprawling, makeshift encampment near the Greek village of Idomeni. At least 10,000 asylum seekers, many of them children, have been stranded here since mid-February.

With few toilets and showers, sanitation is poor; there have been outbreaks of lice, skin rashes and respiratory infections. There have also been a couple of outbreaks of violence. Volunteer doctors treated hundreds of injured migrants last month, after Macedonian border police teargassed the camp to punish a few rock-throwing migrants who tried to tear down the barbed-wire border fence.

"I spoke to the United Nations refugee agency and the Greek police about my situation," Saad says. "But they said too many people want help."

Sweden, where Saad's wife and the older children have now settled, has suspended family reunification. So he is faced with a dilemma: Stay here in Idomeni and pray that the border will open. Or go to one of the camps run by the Greek army and hope European Union bureaucrats can help him and Zahara reunite with the rest of his family. 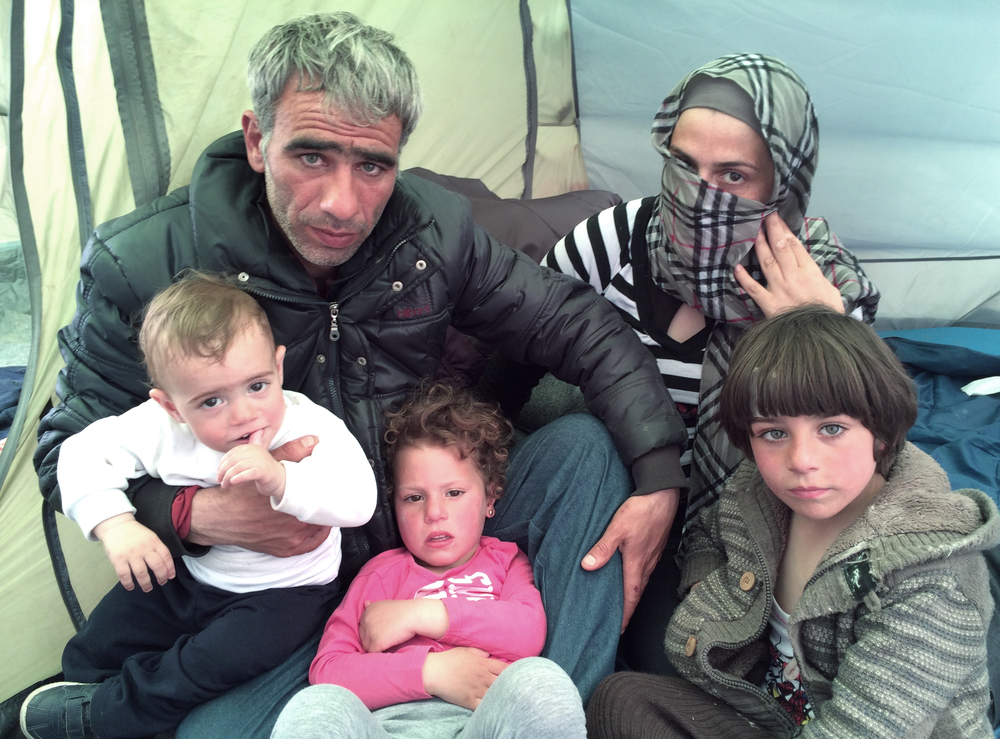 Hassan Bekali (left); his wife, Maha; and their three children, Hamza (from left), Fatma and Ahmad, spent weeks at a makeshift migrant camp near the Greek village of Idomeni, holding out hope that they could reach Germany. "We did not risk our lives and pay so much money to live in misery in a camp," Bekali says.

Nearby, a father from Syria is grappling with similar questions.

Hassan Bekali is crouching in a small, green tent, cleaning up his 4-year-old daughter's vomit.

Fatma got food poisoning after eating a rotten egg in a sandwich distributed by a soup kitchen.

Her dad is just 36, but his hair is white and his blue eyes are bloodshot from lack of sleep.

"I look and see no choice but humiliation," he says, as Fatma slumps into his lap. "I can't feed my children. I can't send them to school. I can't find a place to wash them properly so they're not dirty. I keep asking myself, how is this going to end?"

Bekali says he used to run a ceramics factory in the Syrian port city of Latakia. He says his business went under during the war and that he was repeatedly arrested and jailed by the regime. "I don't even know why I was jailed," he says. "I still have no idea."

Now Bekali's home is this tiny tent. At least his family is all together. He and his wife, Maha, sleep on blankets with Fatma and her two brothers, 6-year-old Ahmad and 1-year-old Hamza.

Like many Syrians, Bekali was hoping to go to Germany. "We did not risk our lives and pay so much money to live in misery in a camp," he says.

He strokes his son Ahmad's hair, then lifts the child's bangs.

"Look at my son's wound," he says, pointing to a bandage on Ahmad's forehead.

"I was hungry and saw a truck with bananas," Ahmad says. "I ran after it."

The boy fell and hit his head. He bled profusely.

"But I still wanted the banana," he says. "I miss tasting sweet things."

Bekali breaks down as he listens. "I cannot provide for my family," he says.

Days after this conversation — and weeks after agonizing about whether to stay on the border, on the chance it would open — the Bekali family gave up their dream of going to Germany.

They boarded a bus for an army-run camp near Athens. They decided to take their chances on resettlement anywhere in the EU, though they have no idea where or when.

But Moyaad Saad and baby Zahara have stayed in their crowded white tent, not far from a razor-wire fence patrolled by riot police.

Saad has reached out to lawyers and asked them to contact Swedish migration officials, in the hopes that he can fill out some paperwork that will allow him and Zahara to travel to Sweden. The lawyers tell him that the Greek government wants to clear out this encampment in Idomeni, considering it illegal. They urge him to move to an official camp.

But Saad fears he will be forgotten there.

"At least people in the world know about Idomeni, and we can move freely," he says. "The other camps are closed. No one will hear us. They will leave us there for years."

Zahara clasps the afternoon bottle of milk her father has prepared for her. He strokes her chubby cheeks, singing her a nursery rhyme about a little girl who will soon be blessed with gifts.

The war has worsened disparities for women in Ukraine

On 'Dance Fever,' Florence + the Machine explores her fractured desires