County border lines in North Carolina are often far from symmetrical. That's especially the case for Forsyth County, which is certainly not a perfect square. That had listener John Strong wondering:

“Why do Forsyth County's southern boundaries look like Swiss cheese?”

WFDD's April Laissle spoke to Martha Hartley, the director of research at Old Salem's Moravian Research and Archaeology Lab, to find the answer. 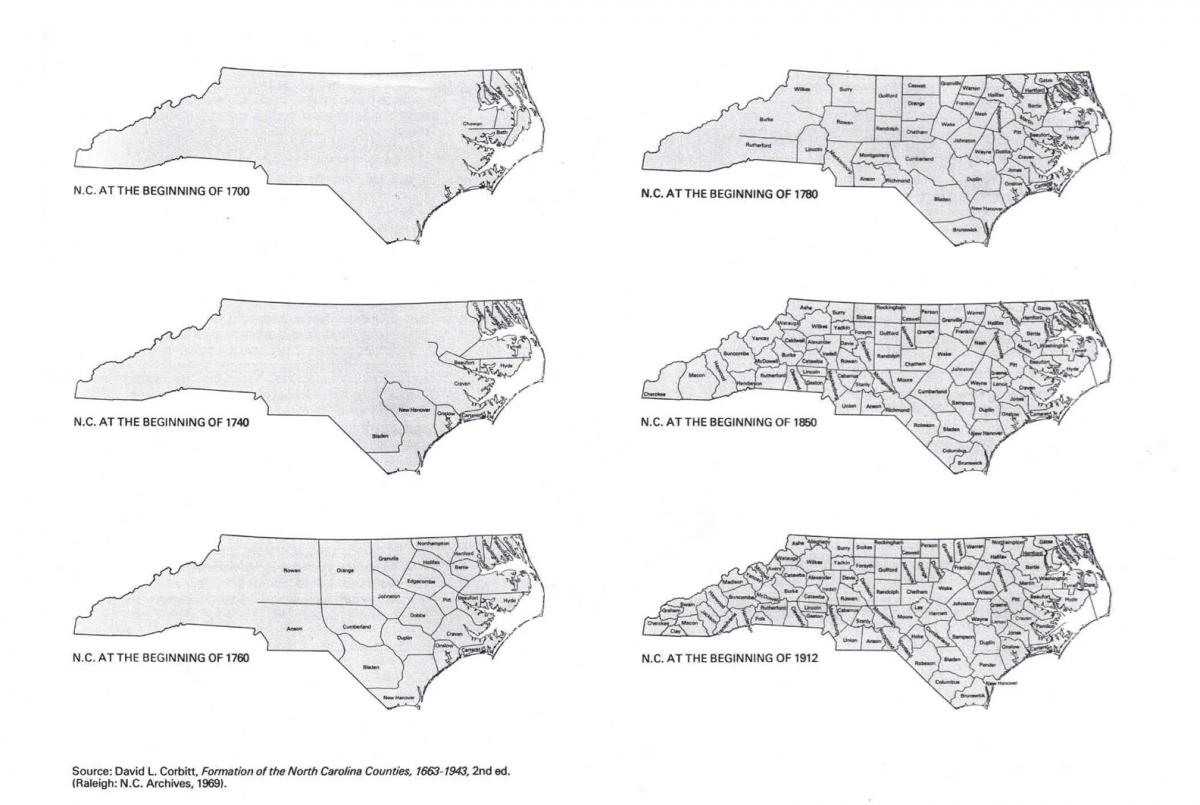 Diagram excerpted from The North Carolina Atlas: Portrait of a Changing Southern State.

“Forsyth County's distinctive outline is a product of history and nature," Hartley says.

That history is centered around the Moravian Church and its purchase of 100,000 acres of land in 1753 in the backcountry of North Carolina. Hartley says they named their new colony Wachovia after the Wachau Valley they knew in Austria with its similar rolling landscape. The Moravians chose the land due in large part to the richness of water resources.

“The Moravians were thinking about the long term, they were thinking about a place that would support their plans for congregations and long-term stability," says Hartley. "And so this water, this amazing Muddy Creek system that is the backbone of Wachovia, is fed by thousands of springs and smaller tributaries. And when you think about where people are going to live in the 18th century, water is life."

Wachovia was situated in Rowan County for the first 20 years the Moravians lived there. But by 1771, population growth prompted colony leaders to create Surry County by splitting up Rowan. But, they drew a dividing line right through the center of Wachovia, worrying the Moravians.

“So the Moravians petitioned, and the line was redrawn in 1773, and it was redrawn by the Moravian surveyor. The southern line of Forsyth County is mostly from this particular moment, and it included the southern boundary of Wachovia, the distinct form that we see today.”

Both the southern and eastern lines of present-day Forsyth County came mostly from the split that created Surry County. For the next 18 years, Wachovia sat in the southeastern quadrant of Surry County, but by 1789 the population had reached another tipping point.

“As the population continued to grow, there was a need for people to be close to their county seat and courthouse, because that's where all the business is done, and it's a powerful place," Hartley says.

So, Surry County was cut down the middle, with the eastern half becoming Stokes County. The lower western side of Stokes was generally drawn along the Yadkin River. Rivers made logical borders because they had to be crossed.

The divide that would finally establish Forsyth County as we know it today didn't come for another 60 years.

“In 1849 Stokes County was cut in half. And the lower portion, which contained Wachovia the whole while, was named Forsyth County after Benjamin Forsyth, a local statesman and war hero who was fatally wounded in the War of 1812," says Hartley.

From there, leaders had to decide where to place the county seat in the new Forsyth County.

“At that time, Salem was a center for trade and growing industry and was located in the middle of the new county, the logical place for a county seat," Hartley says. "But Salem was a theocratic community. It was a religious place, and church leaders did not want a courthouse in Salem with its courthouse business and places of execution. So within the Salem town lot, they sold 51 acres in the northern part for the new county seat, which was ultimately named Winston.”

The borders of the county have stayed more or less the same since then. The original Wachovia tract still fills the middle of it. And in many ways, Winston-Salem's city limits reflect Wachovia's historic borders.

Carolina Curious: What's the main role of the school board?

Carolina Curious: What are the mental health resources for Spanish-speaking communities in North Carolina?