Can Dating App Hinge Make You Talk, Not Swipe?

Can Dating App Hinge Make You Talk, Not Swipe? 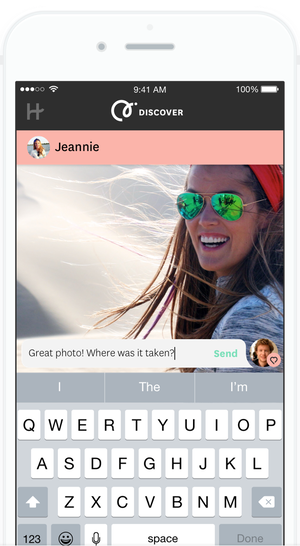 Hinge has killed its freemium product and, in an effort to get serious daters only, is offering a new service for $7 a month.

There is a startup in the love industry that promised to help people find real relationships — not just sex. But, as with so many things in love, it didn't go according to plan. The app became yet another hookup app. Today, after 10 months of soul-searching, the startup is making a very public commitment to change.

It's called Hinge, and it's based in Manhattan's Flatiron District. Back in January, it was coming to grips with a crisis.

"[People] started saying things — on dating apps, on Twitter, everywhere — that we would never say to someone in person," says Katie Hunt. "Walking up to a woman in street and asking her to show you one of their boobs. [It] doesn't happen."

It doesn't happen in real life. It does online.

Hunt is part of the company's leadership team, giving a presentation in a recent all-staff meeting. Hinge conducted market research and discovered some very telling norms. For example, 67 percent of women have received a sexually explicit photo or message on Tinder — the far more famous and infamous competitor.

But it's not just Tinder. It's Hinge too. And it's not just men behaving badly. It's women too. Hunt reads an actual conversation that happened on Hinge:

A man who just got out of the military matches with a woman, and takes the time to send this message: "I got out as staff sergeant, E-6, if you know what the military ranks are at all."

Fair start. She doesn't know, so he explains it means mid-level. And her response — which she'd never say face-to-face — is this: "OK, so this is going to sound absolutely terrible — and feel free to judge me or tell me I'm a terrible person — but I don't date people who don't have grad degrees."

Hunt is horrified: "This person just served our military! He just got home!" The room breaks out into awkward laughter.

The point is not the woman should have liked the guy. She can like who she wants. The point is: Hinge, which first launched in 2013 and has more than $20 million in funding, promised to be different — a place where people treat each other with basic human kindness. The app was built on top of Facebook. You'd meet the friends of your friends (so community is baked in). When you matched with someone, you'd get each other's real full names (not aliases).

"Essentially we realized at a certain point that the path we were on was pretty unsustainable," says Hinge CEO Justin McLeod.

By unsustainable, he meant as a business. Too many users were playing games (Swipe right to see who likes me! Whose pants can I get into?!). And if games were the point, Hinge could never be No. 1. The app had 2.3 million installs. Tinder was processing more than 1 billion swipes per day.

"We were just going to lose out essentially to Tinder over time as it swallowed us because we weren't different enough and our product wasn't living up to our vision," the 32-year-old CEO admits.

McLeod decided to reboot. He let go of half his staff. He let the original Hinge app fall apart (the reviews in the app stores are terrible because of it) and he took the startup back into stealth mode.

NPR got to watch the process up close throughout this year — dropping in and out of the office, sitting in on meetings with users, investors, a Madison Avenue ad agency.

McLeod is finally ready to release the new Hinge app — which is different from competitors.

When you open Hinge, you land in an unusual place: the people with whom you've already matched. By design, the app is encouraging you to converse — not swipe.

And if you want to meet new people, that's OK. "You get dropped right into people's stories, which is a series of questions that they've answered and photos that they've posted," McLeod says.

This is interesting. Hinge created an in-house lab, with thousands of users, to test alternatives to swiping. The startup ended up with an interface that looks and feels a lot like Instagram. You don't like the person. You like or comment on specific things in that person's story.

The company is also making users decide about one person before moving on to the next. And the algorithms are keeping track of people who like incessantly but don't converse. Those people get dinged, shown less to others.

The cost of the new Hinge is $7 a month — not free! It's too soon to tell if it'll work. Today is just the product launch.

Hinge has made a commitment to NPR — to share internal data in the coming weeks, so we can see if they're succeeding, or failing. We'll be back with updates.

In Mississippi, 2 years after ICE raids, Latin American immigrants are there to stay

From bankruptcy to IPO in a year? It's a tune Guitar Center might play

Behind murky claim of a new hypersonic missile test, there lies a very real arms race