Photos: Why Everyone In Mali Wanted To Pose For The Late, Great Sidibe

Photos: Why Everyone In Mali Wanted To Pose For The Late, Great Sidibe

Tributes continue to flood in for celebrated Malian portrait photographer Malick Sidibe, who died of complications from diabetes in Bamako on April 14, at 80.

Mali's culture minister, Ndeye Ramatoulai Diallo, says Sidibe was a national treasure and an important part of their cultural heritage, whose loss the entire country is mourning.

Nicknamed "L'Oeil de Bamako" — the "Eye of Bamako," his capital city — the slim man with the big smile, kind heart and twinkling eyes had a gift for detail encapsulating the exuberance of his country and compatriots, reflected in a lifetime of lyrical, feel-good photographs. 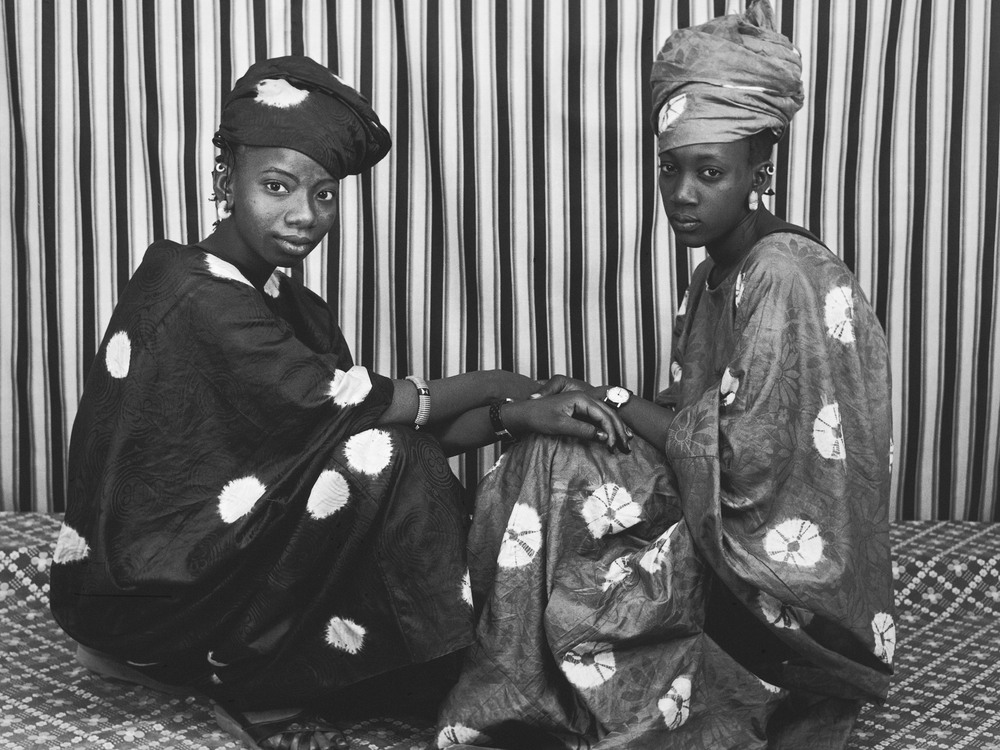 Deux amies Peulhs, printed in 2001 from an earlier negative. People loved to come to Sidibe's studio to show off their treasures — from fashionable garb to a beautiful smile.

Sidibe's distinctive and timeless black and white images, from the 1960s and '70s — the photos he's best known for — remain fresh and exciting more than half a century later. Often with a touch of humor, his pioneering portraits captured the spirit of newly independent Mali, relishing its freedom and having fun.

Admirers praise Sidibe for showing a different face of Africa, recording a moment in Mali's history and swinging the spotlight on local popular culture and the innocence that era represented. It is a far cry from Mali today, battling extremist violence and fundamentalism, preceded by a military coup in 2012.

Sidibe's modest and popular studio in Bagadadji, in Bamako, was a magnet for young people and families who wanted to show off their treasures — be they stylish sunglasses, a new pair of belted, flared pants, a psychedelic shirt, a guitar, a motorbike with a mother, father and child posing upon it, a new braided hairdo or simply a smile.

Even in recent years visitors continued to gravitate toward "Studio Malick" to have their portraits taken. Sidibe seemingly had time for everyone.

Couples dancing were a clear favorite. Sidibe was a master at capturing motion, as Malians embraced Cuban and Congolese rumba, rock 'n' roll, the twist and James Brown.

He was known to travel across Bamako, attending parties and snapping photos of smiling young people in their finery.

All posed enthusiastically, immortalized by Sidibe's large Rolleiflex cameras — in and outside the studio.

As a visual social commentator, he chronicled daily life, and nightlife, in the capital, in vibrant studio and street scenes, and in portraits in people's homes or at public venues and functions.

He'd crisscross the city to catch relaxed young people or teens in swimwear along the banks of the River Niger or children giving an impromptu acrobatics display.

He inspired generations of Malian, other African and foreign photographers, who admired his simplicity, humility, humor, encouragement and kindness.

Global recognition took time. Sidibe's first exhibition in Paris, in 1994, organized by his friend, gallery owner Andre Magnin, brought him almost instant international fame. His work appeared in galleries and museums in the U.S., France, Britain and beyond, as well as in Africa.

Magnin described his friend as an "author of thousands of images of tenderness and beauty."

Sidibe loved to travel. A 2001 profile in Paris-based Liberation newspaper refers to an invitation from Harvard University. "I wasn't intimidated," said Sidibe. "The amphitheater was impressive and the interpreter was the one trembling!"

The Jack Shainman Gallery, in New York, which has represented Sidibe since 2002, is currently holding an exhibition — what has become a retrospective — of his oeuvre.

"There's an amazing turnout of people from all different places coming to see his work," said Shainman.

Sidibe was not destined to become a photographer. As a boy he tended his family's sheep in their village, Soloba, about 200 miles west of Bamako.

He told Liberation "even before I picked up a camera, I was deep into images." Sidibe remembered from his childhood a sunrise that "blocked out the hill in a manner that reminded me of Napoleon's hat."

After attending French school, he went on to study jewelry-making and art in 1952 at the Ecole des Beaux-arts, then known as the Maison des Artisans Soudanais.

Sidibe received numerous accolades. He was the first African photographer to win the coveted Golden Lion lifetime achievement award at the Venice Biennale in 2007 and also the first to be awarded the prestigious Hasselblad prize in 2003.

Dozens of people flocked to the Bagadaji studio after Sidibe's death was announced on Friday. Many others took to social media.

Paris-based Malian singer Inna Modja tweeted a photograph of her mother, grandmother and herself taken in Sidibe's studio, titled, "We won't sit down and shut up."

The portrait is part of Modja's 2015 music video "Tomboctou," shot in Sidibe's studio with its distinctive, stripey fabric backdrops. A camera shutter is a central feature of the song.

His death marks the end of a remarkable era in African and world photography.

But as Sidibe himself said — "I believe the photograph is the best way to live on, after death."

The WHO Knows Insulin Is Too Expensive. How It Plans To Drive Down The Price

Virginia Governor's Bill To Ban Assault Weapons Fails, With Help From His Own Party

14 Americans Taken Off Cruise Ship And Flown To U.S. Test Positive For Coronavirus