In mid-November, a former professional soccer player told a British newspaper that as a child, he had been sexually abused for years by a well-respected youth coach. The player said he knew other players had experienced the same thing — and that a culture of silence kept the abusers out of the spotlight.

But he wasn't keeping the secret any more.

"I want to get it out and give other people an opportunity to do the same," Andy Woodward told The Guardian. "I want to give people strength. ... I'm convinced there is an awful lot more to come out."

His interview unleashed a flood.

In the weeks since, a half-dozen other former players have come forward in the media, alleging years of abuse by multiple coaches and scouts in the U.K. More than 20 former pros have alleged abuse to the Professional Footballers' Association. Some 350 people have reported abuse at youth soccer clubs to police, according to The Associated Press.

The BBC has a detailed timeline of who has stepped forward as a survivor.

Now some 17 different police forces are investigating the scandal. At least 10 suspected pedophiles have been identified, the AP says — and allegations are emerging that authorities within the U.K. soccer world paid off victims in exchange for their silence.

"It was the worst-kept secret in football"

The narratives of those who say they were abused trace a similar arc: Vulnerable young athletes meet powerful coaches and scouts; their families are captivated by the dream of a career in pro soccer. Staying at a coach's house or taking trips without supervision are par for the course. When the abuse begins, it's paired with blackmail and threats to keep the young player silent.

Woodward, the player whose story broke the dam, told of being abused by serial pedophile and former soccer coach and scout Barry Bennell, starting when Woodward was 11. He was a player in Crewe Alexandra's youth program. 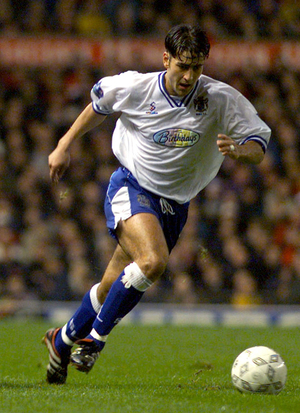 Andy Woodward said he was abused by serial pedophile and former soccer coach and scout Barry Bennell, starting when Woodward was 11. He was a player in Crewe Alexandra's youth program.

"I just wanted to play football. My mum and dad will say that I always had a football in my hands, wherever I went. I saw Crewe as the start of that dream," Woodward told The Guardian. "But I was soft-natured, too, and it was the softer, weaker boys Bennell targeted."

He said Bennell arranged for him to stay at his house. "It was my dream, remember, to be a footballer and it was like he was dropping little sweets towards me: 'You can stay with me and this is what I can do for you,' " Woodward said. "Plus he had a reputation as the best youth coach in the country. So I'd stay at weekends and summer holidays and even take time out of school sometimes."

After the alleged sexual abuse began, he said, Bennell would use threats of violence — and reminders that he could drop Woodward from the team at any time, ending his dreams of a pro career — to control him. Bennell went on to date and later marry Woodward's older sister. Woodward described the wedding as "torture."

Steve Walters, who was inspired by Woodward to tell his story, also told the Guardian that he had been sexually abused by Bennell over a period of years.

"I just had to pretend it never happened and block it out. I knew it could never come out and I was absolutely petrified because I thought that if it did ever come out that would be it for my career — finished," he said. "In my mind, I wouldn't even be able to go out, never mind play football. And football was my dream. It was my life."

But despite the silence about the alleged abuse, it was never wholly secret.

"There were always rumors" about what was happening, Walters said. "It was the worst-kept secret in football that Barry had boys staying at his house."

"Throughout those years at Crewe, so many people used to talk about it," Woodward said. "Other players would say directly to my face: 'I bet he does this to you, we know he does that.' There was all that dressing-room bravado. Then, outside the club, it was never discussed." 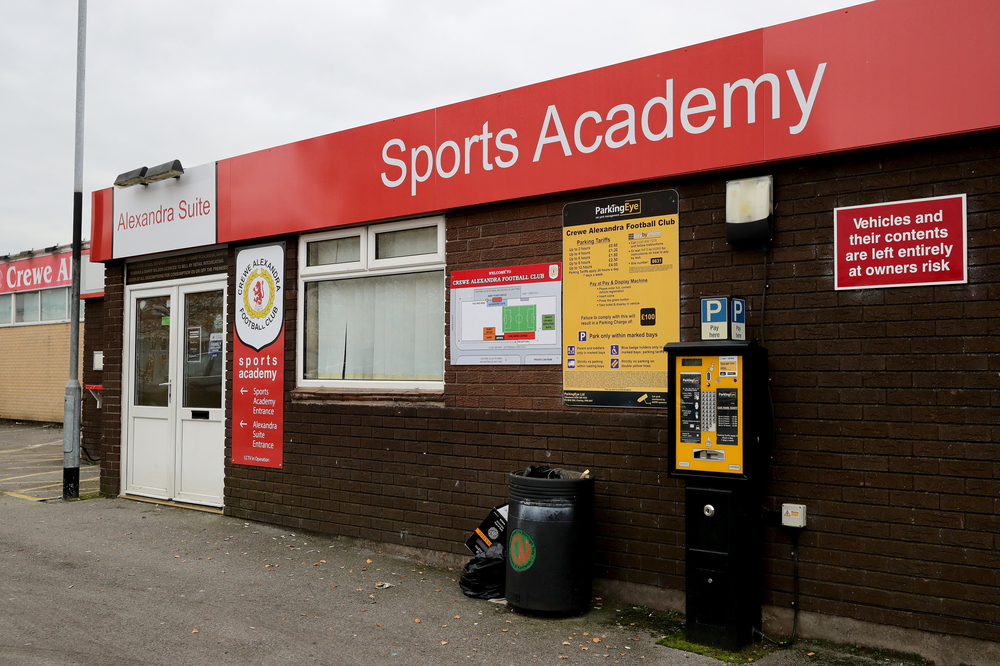 In 2005, a government-backed commission investigated "child protection in football." The 59-page report, which said the structure of youth football puts children at risk, mentioned sexual assault or sexual offense only twice, both times in footnotes.

In fact, Bennell served multiple prison sentences for pedophilia — but he was a free man when Woodward spoke to The Guardian.

In 1994, Bennell was traveling to the U.S. with a youth soccer team when he was arrested by Florida authorities. He pleaded guilty to sexually assaulting a young player.

He was given four years in prison — although he could have received 30 years for each of his six counts of custodial sexual battery — as part of a deal that meant the victim didn't have to travel to the U.S. to testify at trial.

He served three of the four years before being deported to the U.K. There he was arrested and charged with 45 offenses related to sexual assault of young players. He pleaded guilty in 1998 to 23 offenses.

"You preyed on adolescent and pre-adolescent boys," a judge told him at sentencing, according to news outlets at the time. "You could point young boys in the right direction and help them with their careers and wishes to become successful footballers. They were prepared to do almost anything you asked them."

He was sentenced to nine years in prison.

He served two years for that sentence. He was out again when Woodward's interview went live. He was taken to the hospital on Nov. 25 after he was found unconscious and now faces fresh charges of child sex abuse.

Bennell's first conviction was noticed in the press. A Channel 4 Dispatches investigation that aired in early 1997 suggested the entire system of youth soccer programs made children vulnerable to serial pedophiles like Bennell and put children in "potentially dangerous situations." Here's how The Independent described the documentary:

"An investigation by Dispatches says that the hold coaches have over their school-age proteges — the chance of a career in professional football — can give them the opportunity to abuse boys for years with little fear of discovery.

"One former coach, Barry Bennell, who worked at Manchester City, Stoke City and Crewe Alexandra is currently serving four years in a United States prison after admitting buggery and assault on a boy.

"Another amateur club, Ipswich Saracens, found that their coach Keith Ketley was a convicted sex offender. Despite this he had been able to set up another team with Football Association affiliation. He is now serving five years in jail after being found guilty on four counts of indecent assault. ...

"Les Reed, Charlton's first team coach, says that with such a large number of children involved with adults there is a 'potentially dangerous situation' and guidelines help protect both children and staff. 'The FA needs to come out of the towers at Lancaster Gate and really investigate what is going on,' he said."

The next year, in 1998, the club manager of a youth football club connected to Celtic F.C. was convicted of sexually assaulting three teenagers in the late '60s and early '70s. There were rumors that Celtic itself had been involved in a cover-up to keep the assaults secret.

In 1999, the Football Association announced a plan to identify young people who had been sexually abused and put them in contact with "specialists from social services."

But public awareness of the problem didn't seem widespread.

In 2005, a government-backed commission investigated "child protection in football." The 59-page report, which said the structure of youth football puts children at risk, mentioned sexual assault or sexual offense only twice, both times in footnotes.

The report said there were 250 cases of alleged child abuse under investigation by the Football Association. At the time, the Guardian noted that the report "gives no details of the child abuse investigations that it cites ... but they are thought to include inappropriate behaviour and bullying."

A soccer executive responsible for child protection told the Guardian that she preferred to use the term "bad practice" and that the incidents "can't be defined as child abuse unless somebody has been convicted." She said all the cases her team had resolved did not involve a criminal conviction.

"It fell on deaf ears"

In the late '90s, one young player who had been abused by Bennell waived his right to anonymity and went public. Ian Ackley appeared in the Dispatches documentary on how children were vulnerable in youth soccer programs. He spoke to the newspapers about the ordeal of Bennell's assault.

It didn't trigger a wave of revelations or outcry, the London Times writes:

"Where was the media outcry then, the demands for an inquiry, the FA inviting him down for a chat, the world throwing an arm around him? None of that happened.

" 'It fell on deaf ears as far as the rest of the media world was concerned,' [Ackley] says. 'It was a taboo, like a dirty secret. People didn't want to sully their hands with it.' Extraordinarily, he gets those words out without bitterness. ...

" 'I thought it was done and dusted, I wouldn't hear any more about it,' he says."

Instead, it was Woodward's interview with the Guardian that took the pattern of serial assaults out of old criminal records and into the headlines.

FIFA, world soccer's governing body, says it's possible the pattern of pedophilia is not limited to the U.K. and that the world should be "very open to really listening" to anyone in world soccer who steps forward, the AP reports.

And investigators aren't just grappling with hundreds of reports of pedophilia; they are looking into whether there were organized efforts to cover up the abuse.

On Friday, the Daily Mirror reported that a former Chelsea player said he was paid 50,000 pounds (more than $75,000) to keep quiet about years of sexual abuse he allegedly suffered at the hands of a soccer scout.

The massive scale of the scandal, which is still unfolding, has drawn comparisons to the case of Jimmy Savile, a British TV personality and serial predator who abused hundreds of underage girls during the decades he spent at the BBC.

Investigation into the Savile case uncovered other cultural icons who had committed indecent assault and rape of minors, including BBC broadcaster Stuart Hall and rock star Gary Glitter, and found that a "culture of deference" at the BBC allowed the men to commit abuse with impunity.