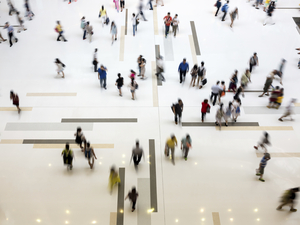 White women are dying at a slightly younger age than in the past. That's according to a report released Wednesday by the Centers for Disease Control and Prevention's National Center for Health Statistics.

The life expectancy for non-Hispanic white women in the United States declined by one month — from 81.2 years to 81.1 years — from 2013 to 2014. Though one month may not seem like much, demographers worry — it's the first time since the government began keeping records that white women's life expectancy has declined, according to the report.

The numbers don't include cause of death, but demographer Elizabeth Arias, who wrote the analysis, decided to dig deeper. She looked at cause of death among white people in the U.S. over the past 15 years. And the changes she found troubled her.

"For the age group 25 to 54, suicide went up," she says. " 'Unintentional poisonings,' which is mainly alcohol and drug poisoning, and chronic liver disease — those went up by quite a bit."

Those underlying factors affected men and women, Arias says, but affected women more. The life expectancy of white men over the same time period did not change.

Many other causes of death declined, she says — including heart disease, cancer and stroke. But those health improvements were offset by the increases in drug overdose, suicide and chronic liver disease.

The report comes just a few months after a separate study by Princeton economists Anne Case and Angus Deaton showed that middle-age mortality among white people is on the rise. The authors of that study also said the increase in deaths was likely due to suicides, drug overdoses and alcoholism.

Ellen Meara, a professor at Dartmouth's Institute for Health Policy and Clinical Practice, said the numbers are surprising because mortality has been in decline for so long.

"There are people for whom life expectancy is falling — and that's happening at a time where everywhere else and for every other group we're seeing all these amazing gains in survival," Meara says.

The NCHS report does have some good news: The average life expectancy for non-Hispanic black men increased by about a half-year — from 71.8 years to 72.2 in that same time period. Arias says that improvement seems linked to declines in cancer deaths, homicides and heart disease.

As economy cools, scattered layoffs put an end to dream jobs for some workers

A U.S. uranium mill is near this tribe. A study may reveal if it poses a health risk

Some states want a fetus to be considered a person. Defining those rights is tough

After the Highland Park shooting, the focus shifts to the victims and their families