In the Facebook Live video streamed earlier this month by Diamond Reynolds after her fiance, Philando Castile, was fatally shot by a police officer during a traffic stop in a Minnesota suburb, Reynolds identified the man who shot Castile as "Chinese" as she narrated the scene.

This episode, we talked with:

It was later understood that Castile was shot by Jeronimo Yanez, who is Latino. In the meantime, Reynolds' testimony gave Christina Xu, a 28-year-old Chinese-American ethnographer who lives in New York City, flashbacks to earlier this year, when many Asian-Americans around the country protested the prosecution and conviction of Peter Liang, the Chinese-American cop who shot and killed Akai Gurley in a dark stairwell of a Brooklyn housing project in 2014.

The protesters said Liang was being treated as a scapegoat at a time of heightened focus on police shootings of unarmed black people, pointing out that white law enforcement officials involved in several high-profile cases in recent years have not faced similar consequences.

For Xu, and other younger Asian-Americans who have shown support for the Black Lives Matter movement and anti-police brutality causes, this was disturbing. "To me, clearly justice is about getting justice for these black families," Xu says. "Not about making sure that Asian people have the same privilege as white people."

Xu says that before it became clear that Castile's shooter was not Chinese, she was worried that similar dynamics might surface in the wake of this case, and that many Asian-Americans would rally to support another Asian cop who killed a black man. So she put out a call on Twitter asking other young Asian-Americans to help her draft an open letter through Google Docs, addressed to their families — in English and eventually translated into dozens of other languages — about why they felt that Asian-Americans should also care about police violence against black Americans. 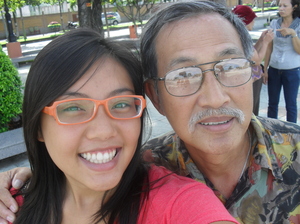 Tien Dang takes a selfie with her father, Nam.

The letter also brought up a subject that Xu and many others felt really uncomfortable broaching with their parents: anti-blackness in Asian-American and immigrant communities. Here's some of what they wrote:

"When a policeman shoots a Black person, you might think it's the victim's fault because you see so many images of them in the media as thugs and criminals. After all, you might say, we managed to come to America with nothing and build good lives for ourselves despite discrimination, so why can't they?"

We talked to Xu in this week's episode of the Code Switch podcast, about that letter and why she and hundreds of others felt they had to write it — and why many felt nervous to send it along. We also talk to Claire J. Kim, a professor at the University of California, Irvine whose work focuses on anti-blackness in Asian-American communities. And we hear from Tien Dang, a 22-year-old who lives in New York, who let us listen in on a conversation she had with her dad that was inspired by the Vietnamese version of the letter.

Read the letter, as well as its various translations to Korean, Urdu, Vietnamese, Tagalog and other languages.

You can check out this episode over at NPR's podcast directory, and on iTunes and other places podcasts are found.