As His Mother's Multiple Sclerosis Progresses, A Son Shifts To Caregiver

As His Mother's Multiple Sclerosis Progresses, A Son Shifts To Caregiver

When I was 6 years old, my mom woke up, got out of bed and crashed to the floor. That's when she figured out half her body was paralyzed. The left side. Right down the middle, like a paper doll folded at the center. She made it to the phone, called a guy she'd just started dating, asked him to take her to the hospital.

When he rang the bell, my mom had to drag the limp half of her body backward, down the stairs, to open the door for him. She told me later, the guy was so scared that during the car ride to the ER he farted the whole time. Couldn't stop. They broke up after that.

For my mom, the scariest part was not being able to move. Being dependent. Being trapped. This was a woman who ran away from home on her 18th birthday, ran from the rural Midwest to Philly and only stopped because of the ocean. She didn't like being stuck, even in her own body.

When I think about the disease she was diagnosed with, I still say it in my head the way it sounded to me when I was 6: "Multiplus-skleroziz." I have to translate it from that preliterate mangle into multiple sclerosis before saying it out loud.

What I did know about the disease scared me, but it took me decades to imagine how scared she must have been. Cut off from most of her family, newly divorced, a single mother, now facing an unpredictable disease that could paralyze her at any moment. 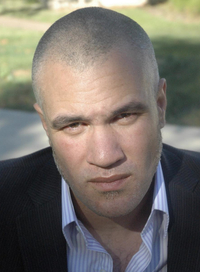 Mat Johnson is the author of the novels Loving Day and Pym. He teaches at the University of Houston's creative writing program.

We got lucky. My mom's MS proved to be the relapsing-remitting type, and she went into a full remission that lasted through my childhood. She kept moving, upward, onward. She was always about the future, about the next job, about the next apartment, the next horizon. She lived in the moment, but that moment was always five years from now.

Later, I'd managed to become a novelist because she taught me to look at life this way: to be constantly planning for something bigger. To look at today as just an investment in tomorrow. And the better she did, the better the block we moved to. In those apartments, she didn't even unpack her boxes. No matter the residence, those boxes always sat in her room, ready to move on when she was.

By the time she had her first MS relapse, we started to wonder if the original diagnosis had been right. Anything can seem like just a dream after 20 years. But this time, the MS took something for us to remember it by: most of the sight in her left eye, and greatly reduced night vision in the right.

She'd run all the way to Alaska by then. Anchorage is dark for months in winter: She wouldn't be able to drive, get around. It was time for her to come home.

My mom made it on her own, independent, another decade after this relapse. And I'm so proud of her for that. That she managed to work despite the growing exhaustion, the growing issues with motor function, short-term memory, decision-making. But the MS didn't affect her will. I moved her into four different apartments back in Philly over that time, coming back even though I'd moved on.

About seven years back, I got a call from my aunt, her sister. She said my mom was ready to come live closer to me. Even if she didn't know it yet. So I came through Philly and we met at a Thai restaurant downtown.

She was seated and waiting when I got there. And she dismissed my aunt's concern, insisted she wanted to work till 70, get her full Social Security check.

And then she got up. And I watched her, my mom in just her 60th year, struggling with her new cane for balance. Shuffling to the door in steps so tiny she barely seemed to move forward.

A month later I got her and her boxes the hell out of there.

She's been in an "independent living apartment" near me the last few years, which is, oddly, what they call apartments where you need a little help. It's nice: three white-tablecloth meals a day, like a cruise ship that never goes anywhere. I stop in once a week, take her out to wherever she wants to make a run.

A few weeks ago, an apartment manager pulled me aside, said my mom signed up to pay a flat fee to stabilize the rent forever. I was shocked, in part because it was four grand I was going to have to pay, but also because I still can't imagine it. Her staying in place. Her living in the same day she's breathing in.

"Your mother says she never wants to leave," the lady told me. And I looked out at my mom, at her table, younger than anyone in the cafeteria, but there because of a disease I wish I could punch in the face, and I saw her not just seated in her wheelchair, but settled into it. And I realized there were no more boxes in her apartment yet to be unpacked.

The ordinariness of 'Ali & Ava' is what makes it extraordinary