Two valuable Indian sandstone sculptures dating back to the eight century were seized by federal agents just days before they were scheduled to be sold at Christie's, a New York auction house.

NPR's Hansi Lo Wang reports that together, the statues are valued at almost a half-million dollars.

"One dates back to eighth-century India and is a rare depiction of a Hindu god and his entourage on horseback.

"The other — believed to be made in the tenth century — shows a Hindu teacher flanked by two attendants.

"Together, they're valued at almost a half-million dollars." 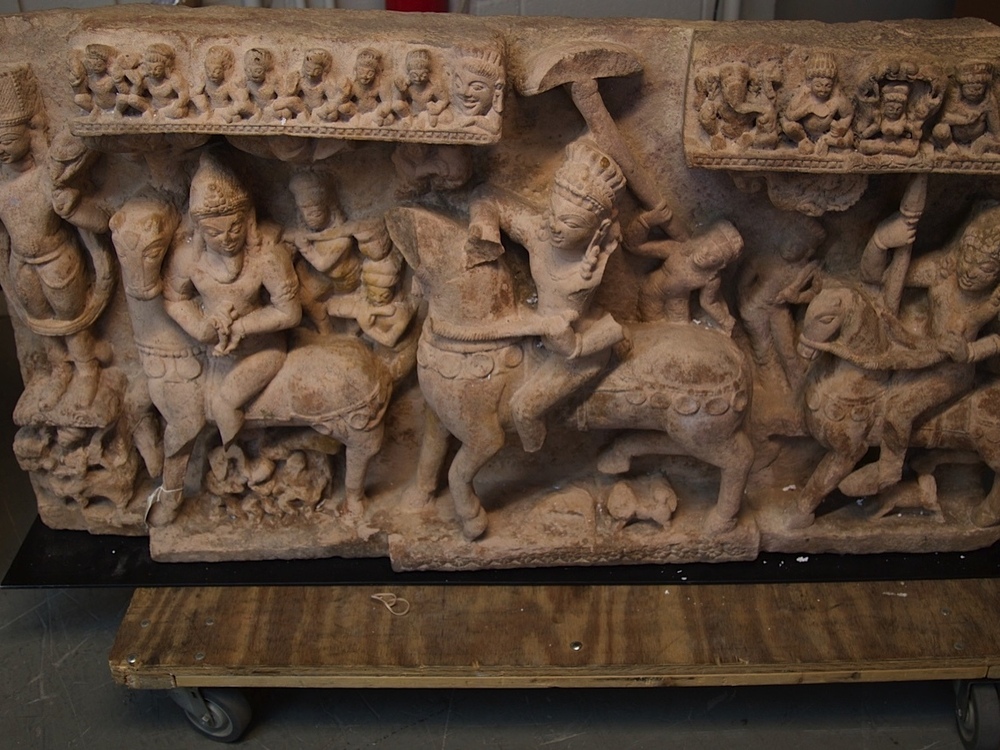 A sandstone panel depicting a very rare representation of the equestrian deity, Revanta, and his entourage, from India, in the 8th Century A.D. It is valued at approximately $300,000.

Agents of the U.S. Immigration and Customs Enforcement's Homeland Security Investigations say the statues were recovered as part of an ongoing initiative called Operation Hidden Idol, which focuses on "activities surrounding the illicit cultural property trade in New York." Both stolen items came from a smuggler of looted antiquities. According to court documents, investigators found an unlabeled computer disc in a Manhattan storage facility in 2012, with a folder labeled "Shantoo" that contained images of stolen antiquities and names of dealers.

A person was charged in connection with the disc, and after pleading guilty to criminal possession of stolen property and related charges, that person became an informant for the investigation. An affidavit by a federal agent says the informant said "Shantoo" was a nickname for Ranjeet Kanwat, a "known smuggler" from India, and one of the main suppliers of stolen artifacts for Subhash Kapoor, who is currently awaiting extradition to New York in connection with more than $100 million in stolen antiquities.

"My congratulations to all of the special agents of HSI New York, who have painstakingly and diligently undertaken these complex and time consuming investigations," he said.

Christie's auction house said it had no knowledge that the statues were stolen.

"Christie's devotes considerable resources to investigating the provenance of all objects we offer for sale. Under no circumstance would Christie's knowingly offer a work of art where there are valid concerns over provenance," the auction house said in a statement. "This is one of the difficulties the art market faces in vetting antiquities, which is why Christie's very much values building strong relationships with and between countries of origin, law enforcement, archaeologists, and the collecting community."

Christie's had been planning to auction the statues during Asia Week New York. Now it has removed them from the list of items for sale and is cooperating with investigators.

An ICE spokesperson said the antiquities "will be repatriated to the government of India" though no date has been set for their return.

According to an ICE press release, more than 8,000 artifacts have been returned to 30 countries since 2007. These items include paintings from France, Germany, Poland and Austria; 15th to 18th century manuscripts from Italy and Peru; as well as cultural artifacts from China, Cambodia and Iraq.

The Democratic coalition will be tested in the Virginia governor's race