Brazil won its first gold medal today in this Olympics, when judoka Rafaela Silva defeated Sumiya Dorjsuren of Mongolia in the women's 57 kg.

Judo has a big following in Brazil, and that enthusiasm followed Silva from one match to the next. Silva grew up about 5 miles from where the competition took place today, and her fans packed the stands. 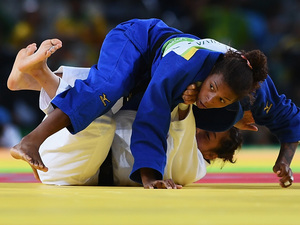 Before her parents moved a mile away, they all lived in a favela known as the "City of God," one of the most dangerous in Rio de Janeiro. She and her sister, also a judoka, learned early to defend themselves. Their parents got them into judo partly to keep them out of trouble, according to this profile in the New York Times.

Expectations were high for Silva going into these games; she'd already notched a world championship in 2013, and won gold in the Grand Prix in Tbilisi earlier this year. Many expected her to medal in these games.

About a minute into the final, Silva struck first, scoring a waza-ari. There are lots of ways to achieve that in judo, but let's just say it was a pretty impressive take-down that gave her a huge lead that her opponent couldn't overcome.

As time ticked to zero, the crowd erupted. An emotional Silva put her hands to her face, then plowed into the open arms of her euphoric fellow Brazilians.

She won the gold, but it was all of theirs to share.