It was the first time ever that an Alaskan athlete didn't win gold in the Alaskan high kick. Earlier this week, at the Arctic Winter Games in Nuuk, Greenland, a hometown athlete named Bent Jakobsen won the gymnastic event — which requires athletes to begin from a sitting position and end in a one-hand handstand to kick a ball suspended above. The crowd went wild.

The Arctic Winter Games, held March 6 to 11, are the Olympics of traditional Inuit sports. The Alaskan high kick is one of about a dozen indigenous games at the event. Others include the stick pull, the sledge jump and the finger pull. More than 1,700 male and female athletes from Russia, Canada and Alaska traveled thousands of miles to Nuuk to compete. 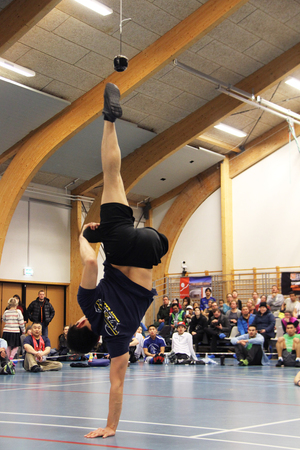 Makiyan Ivanoff of Alaska reaches for the target in the Alaskan High Kick at the Arctic Winter Games. An athlete from Greenland won gold in the event.

Despite the high stakes of an international sports championship, the games — held every other year since 1970 — are meant to be collaborative, making the week feel more like a casual sports festival than a competitive pressure cooker.

Athletes from different countries even offer advice to their competitors while they are competing. During the Alaskan high kick, an Alaskan athlete helped coach an athlete from Canada's Northwest Territories to his highest kick ever.

Many of the sports are inspired by daily life in the Arctic — or at least a version of daily life that includes hunting and fishing for survival. It's a way of living that is quickly disappearing as the Arctic region urbanizes.

Since World War II, commercial fishing, logging and oil drilling have pushed much of the circumpolar region away from a subsistence hunting economy and into one dominated by more centralized, modern industry and trade. The pace of modernization has been rapid, and fewer and fewer people are living the lifestyle these games originate from.

One game, the stick pull, involves holding onto a short, tapered stick that's slathered in grease to resemble a slimy fish. Two athletes grasp the stick, and the one who can pull the stick away from the other wins. 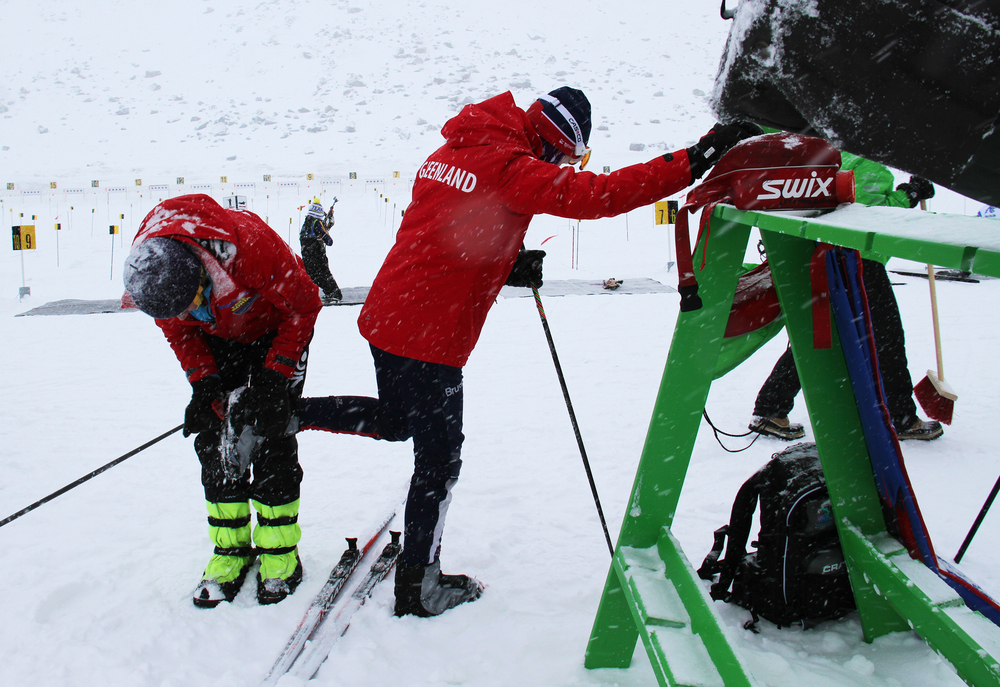 "It's a survival technique made into a game," explains Tonny Fisker, a Greenlandic athlete who has competed in seven Arctic Winter Games. "All the games have different stories."

In the triple jump, similar to the track and field sport of the same name, competitors jump with both feet three times in quick succession. Whoever jumps the longest distance wins.

"If you're on the ice and the ice is breaking up," Fisker says, "you have jump from ice to ice. I tried it when I was younger."

Of course, the big difference between real life and the game is that in the gym, there's no freezing ocean to drown in. 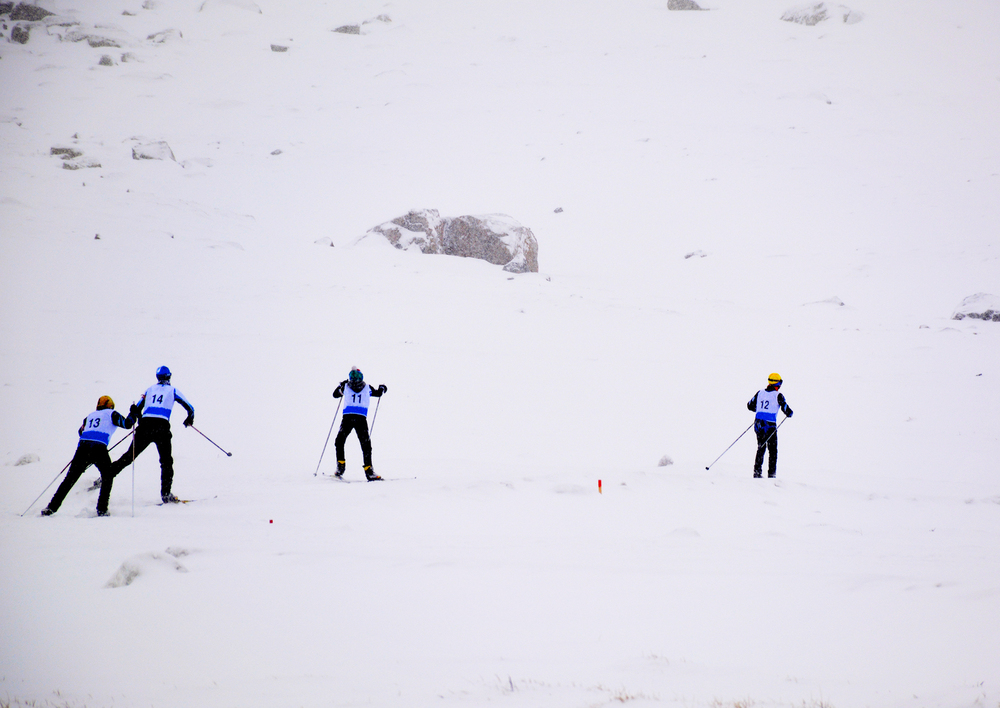 Teenagers compete in a sprint biathlon in Nuuk, Greenland, during the Arctic Winter Games.

This is the first time Nuuk has hosted the Arctic Winter Games, and it was an enormous logistical challenge for the town of 17,000 to host more than 2,000 guests.

The government closed the schools and turned them into dormitories for the athletes. The town bought extra buses and Air Greenland, the national carrier, stopped all regular flights to use every plane it has to shuttle teams to and from Nuuk. Regular flights will resume after the athletes leave on Saturday.

The mayor of Nuuk, Asii Chemnitz Narup, says that even showers are an issue. "We had to make sure we had the water capacity, the electricity, everything," she says. "And there is the weather. We cannot control the weather, but we wish we could."

A blizzard on the first day of the Games didn't stop events from going forward. On Tuesday, when the first biathlon race began, it was still snowing and windy.

Greenland's Ukaleq Slettemark, 14, won the 7.5-km [4.6 mile] biathlon, a combination of cross-country skiing and shooting, for her age group. She explains that shooting is part of her everyday life in Nuuk. She loves hunting with her family.

Something happened this week in the capital of Greenland for the first time ever. A Greenlander beat an Alaskan to win a gymnastic event called the Alaskan high kick. It was one of many events at the Arctic Winter Games in the snow-covered city of Nuuk. The games wrapped up yesterday. Rebecca Hersher followed two athletes as they prepared for their events.

REBECCA HERSHER, BYLINE: About a week ago, the world champion was practicing in a school gym.

TONNY FISKER: I'm Tonny Fisker, and, yeah, it's my seventh time at the games.

HERSHER: Tonny Fisker has won a lot of gold medals over the years. Today, he's practicing the one foot high kick. Fisker runs toward a sealskin ball that's hanging about 10 feet off the ground.

HERSHER: He leaps in the air, kicks the ball and lands on one foot. It's just two days until the Olympics for sports like this one. And people from the Arctic take their games seriously. For example, there is one sport called the finger pull. Yeah, I know what you're thinking, but Tonny Fisker says it's no joke.

FISKER: When we pull fingers, it's serious business. It's not like the American version of farting (laughter).

HERSHER: As he practices, Fisker explains that some of the games actually come from Inuit survival techniques - like a version of triple jump.

FISKER: If you're on the ice and the ice is breaking up, you have to jump from ice to ice and yeah...

HERSHER: So sports that imitate life-or-death situations on pack ice - that's one part of Arctic Winter Games. But there are also more common sports like skiing, and those ones are only open to teenagers from Arctic communities. Ukaleq Slettemark is 14. She's the sole member of Greenland's biathlon team. Biathlon's the one with skiing and shooting, and shooting is part of everyday life for Ukaleq.

UKALEQ SLETTEMARK: I shot a reindeer this summer. Yeah. It's a really good feeling when you hit something.

HERSHER: Before you start imagining some old-fashioned hunting lifestyle, let me tell you that Ukaleq is a modern kid. The first I met her, she was holding an iPhone and wearing a T-shirt printed with the words I'm jealous of me too. Her hair was in magenta dreadlocks. Ukaleq was favored to win a medal. On the morning of her first race, there was a blizzard.

At the starting line, shivering teenagers shook snow out of their eyes and sprinted off, one at a time.

HERSHER: In case you need to brush up on your biathlon race rules, basically Ukaleq is cross-country skiing around a flat, snowy track.

HERSHER: Four times, she comes around the track, lays in the snow and shoots her rifle at a target.

(SOUNDBITE OF CHEERING AND SHOOTING)

HERSHER: After the race, I walk with her away from the finish line.

So how do you feel?

HERSHER: It turns out Ukaleq won a gold medal. So did Tonny Fisker over at the Inuit Games. But neither of them seems particularly preoccupied with the results. More importantly, it was fun. For NPR News, I'm Rebecca Hersher in Greenland.

BLOCK: Rebecca is reporting from Greenland as NPR's Above the Fray fellow, sponsored by the John Alexander Project. Transcript provided by NPR, Copyright NPR.

Oldest Nurse In U.S. Barred From Working Because Of Pandemic