The Arctic Suicides: Your Questions Answered

The Arctic Suicides: Your Questions Answered

Last week, NPR published a special report on suicide in native Arctic communities. Reporter Rebecca Hersher spent 10 weeks in Greenland, the Arctic country with the highest known suicide rate in the world. It's 82.8 suicides per 100,000 people each year — six times higher than the U.S. suicide rate. She interviewed Inuit people in the Greenlandic capital, Nuuk, and in small towns on the country's remote east coast. She spoke with community leaders and mental health professionals who are trying to prevent suicide and come to terms with its underlying causes.

Here, Rebecca Hersher answers some of your questions around the series.

The headline, "The Arctic Suicides: It's Not The Dark That Kills You," makes it clear that people don't kill themselves because of the dark. So is it the cold?

A lot of people asked this. Honestly, when I started reporting this story, I asked this question, too. The dark and cold seem like natural culprits for the high suicide rate in Arctic communities. In a lot of Greenlandic towns, the temperature stays well below freezing for six months or more, and, depending on how far above the Arctic circle you are, the sun doesn't come up for weeks and weeks in the winter. But when it comes to suicide, cold and dark are just not the problem, or at least they're not the main problem (one can never truly know why any one person kills himself or herself).

In Greenland, and in other parts of the Arctic, there is a suicide "season" — a time when the most people die by suicide. It's well known among public health officials and priests and teachers and other people who professionally worry about people in the community. The suicide season is spring. When the dark and the cold finally lift, and the sun is up and the ice is melting. That's when people end their lives. It's not the dark or the cold. It's something a lot more complicated (which you can read about here). 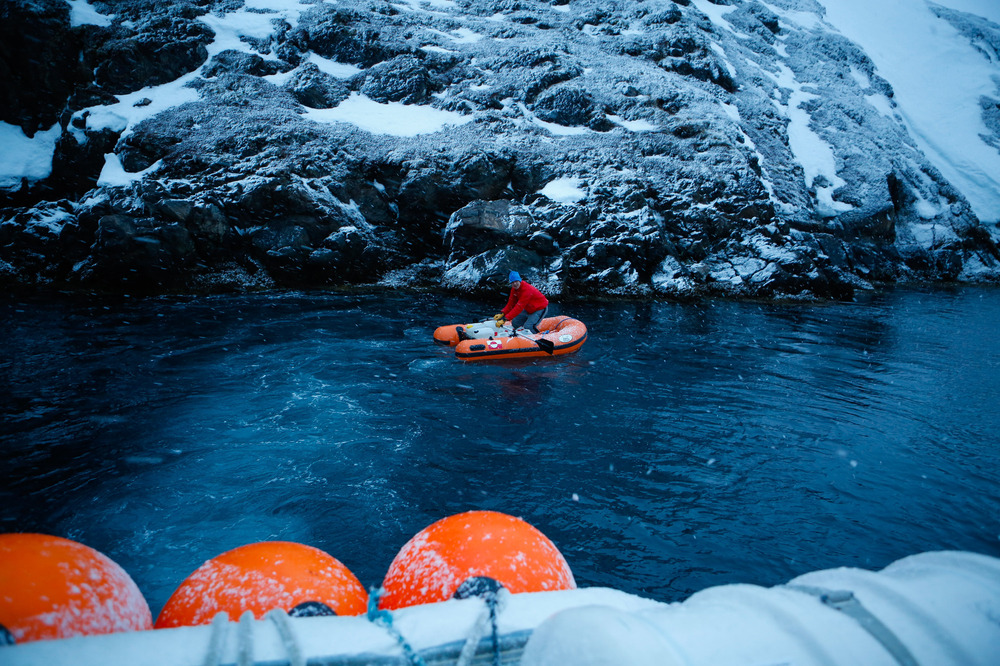 A visitor rows an inflatable dinghy loaded with fresh water to a small dock at the old settlement of Kangeq, Greenland. The village was officially shut down by the Danish government in the 1970s, and its residents were moved to a concrete apartment block in the capital city.

I'm very curious about why there was no mention of suicide among young girls/women. Do the suicides only involve boys and men? It seems like there should be some mention of this issue.

In Greenland, and in almost every part of the world, men kill themselves at higher rates than women. In Greenland, the majority of suicides are among men and boys, so we chose to focus on men in our story. In the U.S, the suicide rate among men is about three times higher than among women, and middle-aged white men are at the greatest risk. There are many potential reasons for this — the number of men who own guns is much higher than the number of women, and many men exhibit more impulsive or violent behavior than females. However, the suicide rate doesn't tell the whole story. According to lots of studies, the most of recent of which came out this month from the CDC, women experience suicidal thoughts at least as frequently as men do, and perhaps even more so. Although they do not die by suicide as often, women certainly struggle with the idea of suicide, and the rate of death by suicide among women is climbing. In Greenland, the trend is similar. The suicide of a high school girl in Nuuk in December sent shudders through the capital, and in the last five years, the rate of suicide among young women has been climbing. Last year, Greenland's National Board of Health noted that suicide prevention efforts should focus on both men and women, especially those under 25 years old.

It sounds like the Inuit culture in Greenland has been beaten down and demonized since colonization by Denmark began in the early 1900s. Are there any efforts to preserve Inuit culture?

Absolutely. Despite the twentieth-century pressure cooker of rapid modernization plus colonial racism, modern Inuit culture in Greenland is rich and complex. Part of that comes from Greenland's increasing independence from Denmark. Most people in Greenland are Inuit — it's about an 80 percent majority of the 56,000 person population. And starting in 1979, the government in Nuuk has taken on more responsibility for governing the largest island in the world, including public health and education. The official language of Greenland is West Greenlandic, and there is an entire agency devoted to bringing that native language into the modern era by adding vocabulary and standardizing spellings. There are new Greenlandic museums telling the history of the Inuit people. As of last year, Greenland's first official art historian is in charge of the national art gallery in Nuuk, and the Inuit Circumpolar Council, an advocacy group for Inuit people around the Arctic, represents the interests of Inuit people at the United Nations.

Not only is Inuit culture being preserved in Greenland, it's thriving and changing and becoming something new and modern. There's even a smartphone app in the works for translating from Greenlandic to English. 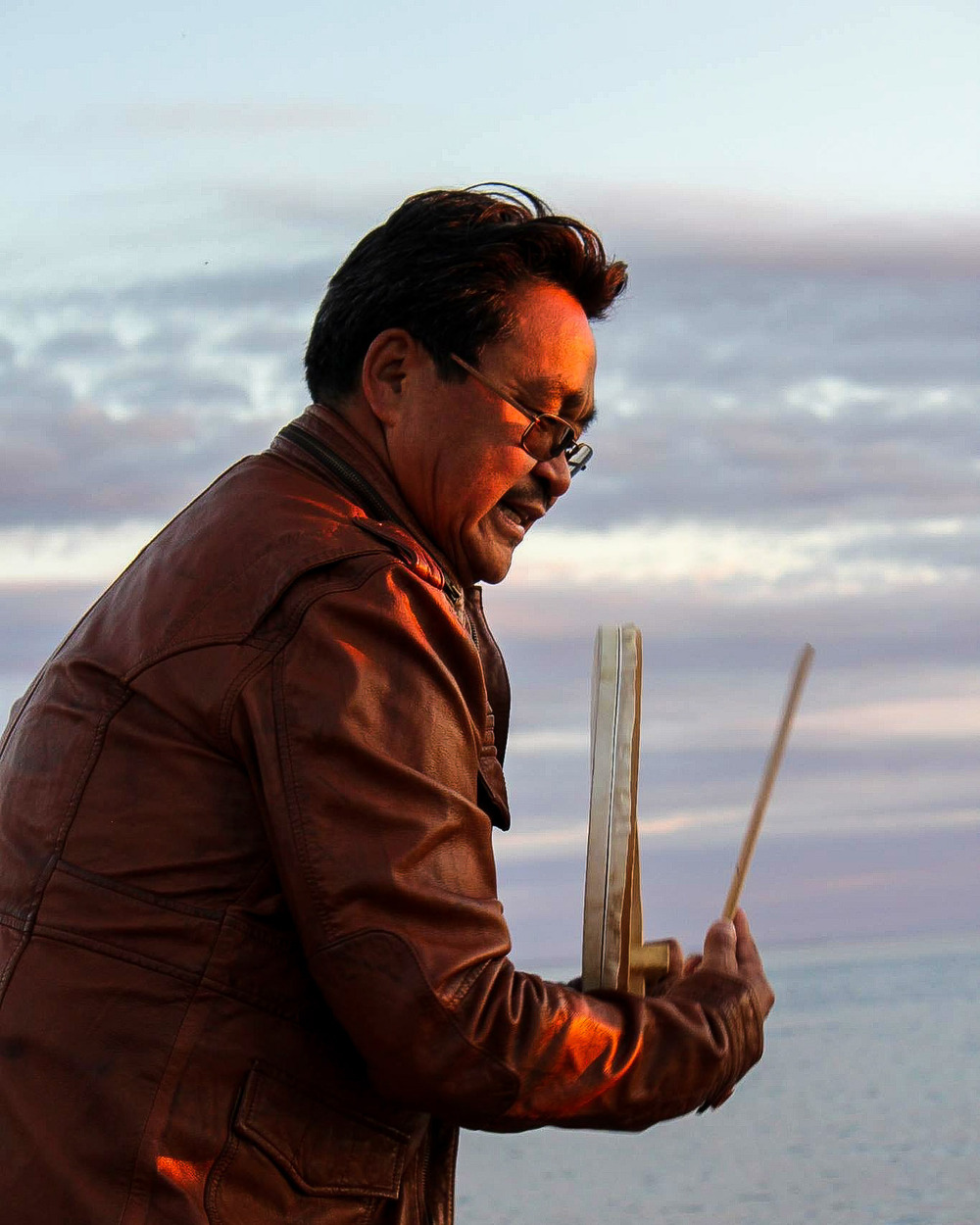 Anda Poulsen plays the traditional Inuit drum and sings the old songs by the ocean in Nuuk. A family therapist, he started a support group for parents who had lost a child to suicide.

What about suicide in other native communities?

Suicide is a big problem in native communities around the world. In the circumpolar region alone — from Greenland through northern Canada into Alaska and across the Bering strait in the destitute Russian region of Chukotka — thousands of native communities struggle with very high suicide rates as well as alcoholism and child neglect. Just this month, the Attawapiskat First Nation in northern Ontario, Canada, declared a state of emergency after 11 people attempted suicide in one night.

Is there any joint work between Greenland, Canada and Alaska to address the issue?

There are a lot of joint public health and suicide prevention programs. One, called the Resilience and Suicide Prevention Project, was developed in Canada. Beginning next year, the Greenlandic Ministry of Health will use it to build emotional resilience among community leaders and teach people how to recognize and react to suicidal behavior. The Arctic regions also collaborate to make mental health services more accessible. Like the towns of Alaska, Greenlandic towns are really isolated — you need a helicopter to get to most of them. Because the population is so spread out and hard to visit, and because in both Alaska and Greenland there are not enough psychologists, therapists and psychiatric nurses, it's hard for people to get face-to-face care. For about five years, Greenland has been using a telemedicine system developed in Alaska, which puts patients in touch with doctors via video link. Doctors and patients I spoke with think the system is a vital addition to hospitals in remote parts of the country, but almost everyone acknowledges it has some limitations. Patients with chronic or complicated problems are evacuated to larger towns for care.

How can we help?

Suicide is a problem in every community. You can help the people in your life by listening and educating yourself about the professional resources available for people who are struggling with suicidal thoughts.

This Q&A with psychologists explains what to say if you're worried about someone, and what specific questions you can ask a young person who seems depressed. 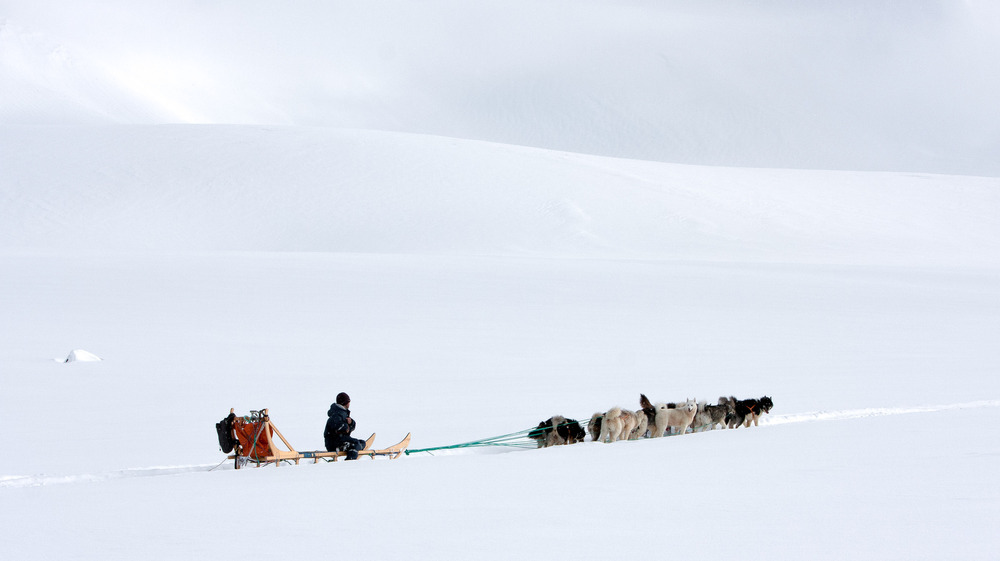 A lot of people think the cold climate could be a reason for suicide. But in fact, "suicide season" is spring. Above, a team of dogs and sled driver approach a glacier outside Tiniteqilaaq.