Winston-Salem is an economically divided city, and those divisions have only accelerated following the Great Recession. Since then, while total home values throughout the city have soared, in East Winston, they've steadily declined from nearly $3.5 billion dollars in 2007 to just over $1 billion today.

A study by the public problem-solving organization New America, based in Washington D.C., and Winston-Salem State University's Center for the Study of Economic Mobility (CSEM) — researching barriers to economic mobility — shows why it's happening, the impact it's having on individuals and neighborhoods, and what can be done to stop it.

The report is titled The Lending Hole at the Bottom of the Homeownership Market. CSEM Co-authors Zach Blizard and Craig Richardson spoke with WFDD's David Ford.

Craig Richardson on the Dodd-Frank banking regulations that came out of the Great Recession. What the regulations were intended to do, and how they affected first-time homebuyers:

Prior to 2008, there was a tremendous laxity in lending standards for people buying homes, very little documentation. And so, there was this huge housing bubble. And many people at the bottom of the ladder — low-income folks —were taking advantage of a lot of lending practices. And so, Dodd-Frank regulations came in, in the wake of the financial crisis, after 2008, to try to stop a lot of this predatory lending by some of these institutions.

Now, one of the things that we've found in the study is that in the aim of trying to help folks at the bottom of the economic ladder, some of the least affluent, these regulations actually swung too far the other way. They have made it extremely difficult, and unprofitable for banks to be in the lower end of the market, that is the sub $100,000 area. And as a result, the regulations have made all loans more expensive. But the smaller loans are the most expensive to process. And banks have left the market across the country, including in Forsyth County.

As a result, we have a huge change in terms of homeownership at this level. Seventy-five percent of all small dollar homes less than $100,000 are now purchased through cash — that is to say, people who have $100,000 in their pocket, versus 30 percent in 2001. There's been a tremendous change in who buys these inexpensive homes. And of course, a locking out of buying that home by that person with a modest income. 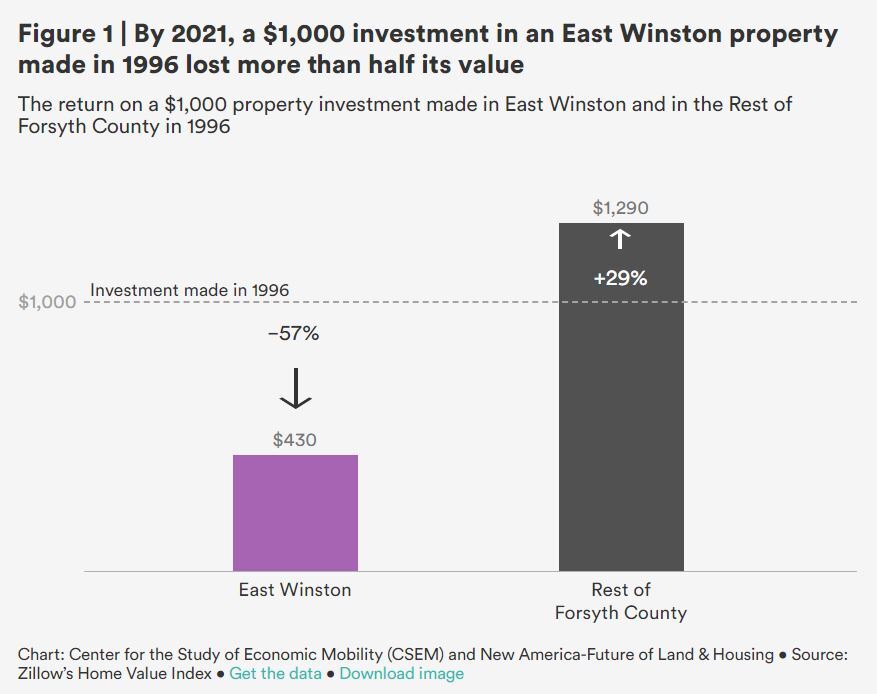 Zach Blizard on tracking home values in East Winston and the rest of Forsyth County from 2000 to present:

Craig Richardson on buyers being squeezed out of the market and the consequences of all this for the homes themselves and the neighborhoods:

So, if we have now eliminated a large swath of potential homebuyers, people who are thinking about building wealth, and what we have left are cash buyers, cash buyers who may not even live in the city, they have a different goal than somebody who has a home who's thinking about passing that to the next generation. Their impetus is to make some sort of return on that property, but not really invest in that property in the same way that a homeowner would. And given the fact that there's a lot more rental properties occurring in the neighborhoods, that can lead to a downward spiral that is self-reinforcing, because if everybody around us is renting, and there's not particularly much investment going on in those homes, that's going to pull down the value jointly of all the homes together. So that's a real problem to overcome.

Zach Blizard on what can be done to reverse the tide with regard to small home loans and allowing more people to access them:

At a larger scale, there seems to be the need to potentially revisit some parts of Dodd-Frank, maybe to remove some of the constraints when it comes to those fees, those fixed costs, those fixed processing costs. And then there's also the need to just kind of expand the education surrounding other lending options. So, for example, local credit unions, they often offer a wide range of products that you know, many people are unaware of there, they can be more flexible. They also might be more willing to make smaller loans.

*Editor's Note: This transcript was lightly edited for clarity.