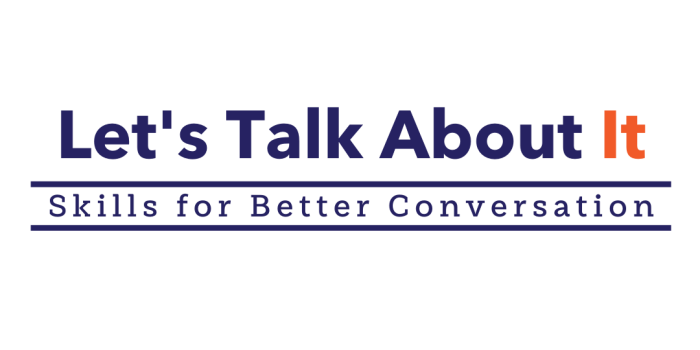 Let's Talk About It: the art of asking questions

Today on Let's Talk About It, dialogue coach David Campt guides WFDD's David Ford through the process of being fully present, asking thoughtful questions, and shifting the focus from being understood to understanding the other person.

On the art of persuasion:

The focus from a dialogue standpoint is to try to be fully present to what's happening, and not overly focused on what you want to happen. What you want to try to stay aware of is how can I deepen this connection, how can I make sure I understand this person, and not how am I trying to move this person. As important as persuasion is, I think persuasion is kind of like — have you ever tried to catch a butterfly with your open hand? Part of what happens is that the wind you create when you reach for the butterfly pushes it away. And something like that happens in human encounters, when you generate something called reactance if you're trying to change them. Now, ultimately, the best way to change them is to not focus on changing them. It's a weird kind of a Zen thing. What you want to do is to be present to understanding them, and to have a strategy of really listening to try to foster that understanding. And it is ironically through that, that you have the best chance of trying to move them if you understand where they are now and make them feel heard. But that requires you having a mindset of I'm just here to try to understand this moment.

On the importance of stories versus facts:

If you want to influence people in the long run, just like the author Stephen Covey said, first seek to understand, then to be understood. What you want to do is to develop the practice of asking other people about their point of view first. Studies have shown that if you want to influence people, the most important thing to do is to make them feel heard. So you want to shift your mindset to understanding and to shift your conversational strategy to going beneath their opinion, to the experiences behind their opinion.

You want to ask questions, you want to get them talking, so that they're relating to you, not only their opinion, but the experiences that drove their opinion. So they're telling you a story —what you're trying to do is to shift the conversation away from exchanges of facts, to exchanges of stories, because those are more connecting in any case. So part of the mindset is to say, I want to understand this person, and I want to understand how this person who is a child of the universe just like I am who's reasonably intelligent just like I am, they came to different conclusions. How did that happen? And so it is from that place, that you can ask questions, and they can feel your curiosity, and you can get them talking before you start telling them how you came to your opinion.

On the value of nurturing our curiosity:

One of the things that researchers know who study the brain is that the parts of us, which are activated when we're under physical threat, are also activated — the same parts of us — when we're under ideological threat. When people start countering our deeply held ideas with what they perceive as facts, the same parts of our brain that light up when we’re under physical threat light up. So part of the reason for shifting to stories instead of facts is that we're not activating those same defense mechanisms. Everybody wants to be respected and seen. And by asking questions, you tap into that natural desire that we all have, as opposed to that inclination to fight or flee, that can happen in a conflict. So, when you look somebody in the eye, even if it's over zoom, and you communicate, "I really want to understand where you're coming from," that's such a refreshing counterpoint to the kinds of encounters we typically have. It tends to open up people's hearts and opens up your heart too. So part of the reason for the strategy is that it fosters a kind of opening up of people, to their own experience, different ways of looking at their own experience and other people's experience, your experience. Part of what can happen … is that when you ask people to tell you a story that relates to how they think about something, they will sometimes realize, "I came to a certain conclusion a long time ago, and that is not necessarily valid." Sometimes what actually happens is just from your asking the question of "how did you come to that conclusion," or "when was the first time you thought that?" Sometimes you foster a level of introspection in the other person that helps them revisit why they think that. So ultimately here, a key point is to use the encounter to foster greater connection. And you could argue listening is a form of love. So you want to bring that to the conversation.

The Dialogue Company has provided these worksheets for you to work on your dialogue skills on your own time.

Strategies for being a force for better dialogue.

Let's Talk About It: Skills for Better Conversation