This reporting project is a collaboration between WFDD, Carolina Data Desk at The UNC School of Media and Journalism and Wake Forest University's Journalism Program. It was made possible through funding from the Knight Foundation.

For the past 22 years, Wanda Faye Shelton has called this modest 3-bedroom bungalow home. On a rainy morning in March, the 72-year-old widow is packing up boxes filled with four generations of belongings, and making tough choices on what stays and what goes.

Shelton says she receives a little more than $700 in Social Security benefits each month, but $300 of that went to rent and left her with about $14 a day to pay for her other expenses.

“I can’t — I just couldn’t pay all the bills,” says Shelton. “I didn’t get enough to pay the rent and the lights and the water.”

Shelton doesn’t want to leave this place. Her landlord is evicting her. She’s not alone. Winston-Salem and Greensboro have among the highest eviction rates in the country. For people like Shelton, the math is simple and unforgiving. Sluggish wage growth and rising rents mean you can be just one car repair, utility bill, or health crisis away from losing your home.

Since 2014 in the Triad, more than 100,000 eviction cases have been brought against people just like her — renters on the thin line between being sheltered and homeless.

A Home For Generations Gone

For decades, Shelton shared the monthly rent with her mom and one sister. They’ve both since passed away, leaving Shelton to stretch her fixed income to pay rent, and care for her teenage granddaughter, Jamie. Even with help from her part-time job at McDonald’s, the numbers just don’t add up.

Shelton tires easily after recovering from a recent outbreak of shingles. She can only pack for short spurts before needing to rest.

She slowly scans the cluttered room illuminated by a bare light bulb dangling from the ceiling at the end of a bright orange extension cord: half-filled boxes, stacks of papers, a few photos and paintings hang on the dark pinewood walls.

”I’ve never gotten an eviction notice — never,” she says. “And I’ve never been in a situation where I really don’t have a home. I don’t have a place to live.”

For all of the money that her family has paid in rent during the past 42 years, they could have bought this house several times over. Now she’s out and has no claim on it. For Shelton, this is personal, and she’s losing trust in people.

“They Just Don’t Have The Cushion”

The reality is — when it comes to eviction court — all parties lose something. For landlords, this is income. It’s money spent changing over a vacated unit. It’s also money lost when renters stop paying and while the apartment remains empty.

That of course gets resolved with a new tenant. But for renters, often the working poor, eviction can be the beginning of a long downward spiral.

“So, they tend to kind of fall behind on rent, any kind of issues they might have with their car, if they have a family member who has to be bailed out of jail, and who has other financial issues,” she says. “They just don’t have the cushion to both pay their rent and deal with the kinds of things that come up every day.”

But for all the stress evictions cause, the process itself is strangely mechanical.

First, the landlord goes to the county clerk of court’s office. There, he fills out a request to eject the tenant. Almost always, the reason is simple: the tenant is short or late on rent.

The landlord comes to court two weeks later. He needs the blessing of a magistrate to evict his tenant.

At 9 o’clock every morning, tenants and landlords file into a nondescript waiting area. Anywhere between a handful to dozens of people sit in chairs lined against walls. A magistrate calls out names, one case at a time, and quickly swears them in.

The questions come rapid fire: Do you have a lease? What does your lease say about rent being due and notice to evict?

Once in eviction court, the matter is typically resolved in a matter of minutes. Usually, the tenant doesn’t show up. But when she does, things can quickly get expensive.

About a third of the time, the cases are dismissed. Often, it’s because the tenant and landlord reach an agreement and the case gets tossed the same day of the hearing. Other times, the tenant brings proof she already settled her debt.

Whatever the judgment is, both the tenant and landlord have 10 days to appeal. Then the landlord can go back to the clerk's office and ask the sheriff's office to assist while he changes the locks.

That final knock from the deputy comes about 10 days later. Instructions are simple: grab a few necessities like medicine, a change of clothes, and get out. Tenants can arrange to come back for their belongings at a time that's convenient for the landlord.

For those evicted, the stakes are high and the impacts are felt immediately.

Nearly 90 percent of the time, the tenants lose. Some pack up the moment the sheriff tacks the notice on the door. Many leave before the hearing takes place. Others settle up and find a way to stay, even after the landlord wins in court. And still others linger until the sheriff makes that final knock on the door.

On Wanda Faye Shelton’s day in eviction court, she appears even smaller than her barely five-foot frame. Her imposing son, Bobby Lucas, sits beside her, whispering in her ear, translating what he can of the unfamiliar process. He says the experience was unsettling.

“Just how many people there were — it was just heart-wrenching,” says Lucas. “There were 24 people being evicted just from that company that day.”

Lucas and his mom didn’t come here to win. They knew the rent was too steep for her to manage. They came with one simple request: a few extra days to pack up a house and basement filled over decades.

“They said they would give us until the end of the month but after that couldn’t guarantee anything unless we pay a month’s rent,” he says. 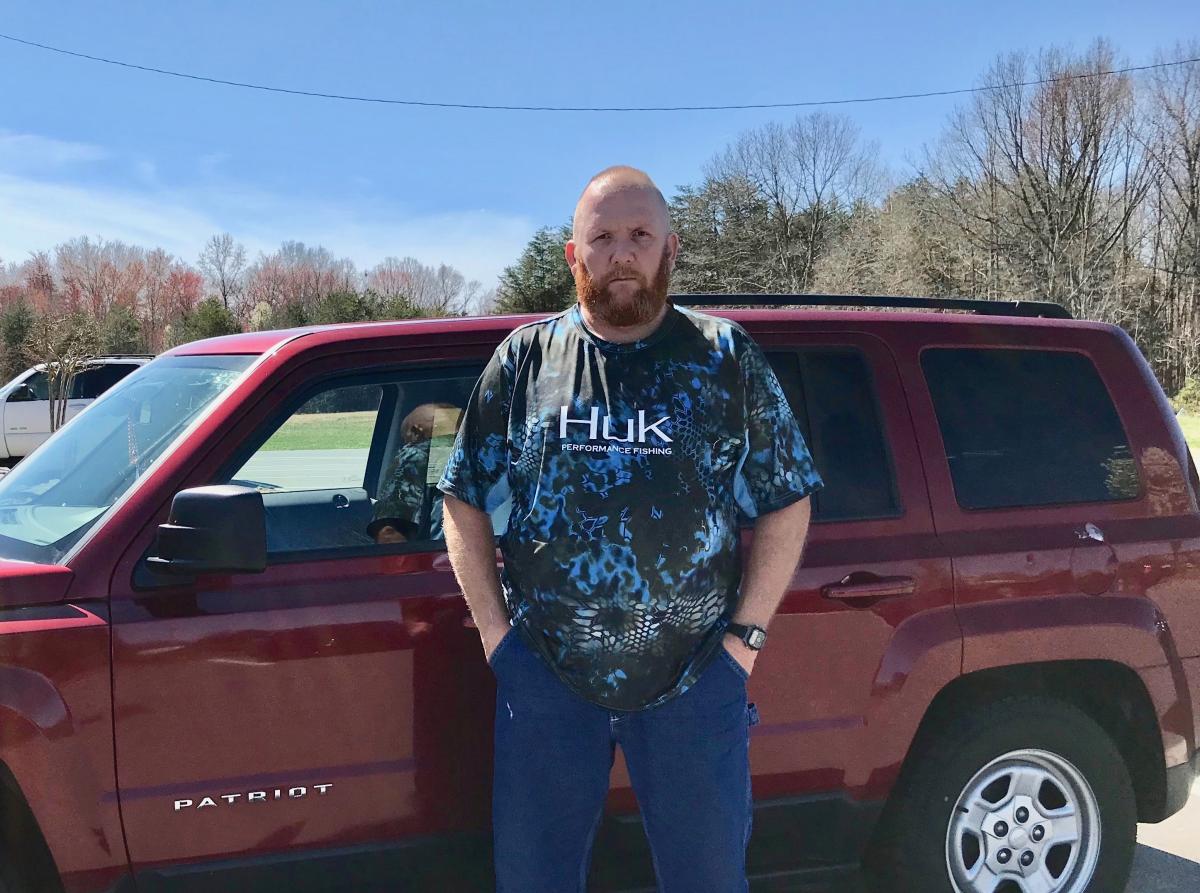 Wanda Faye Shelton’s son, Bobby Lucas, will store most of their possessions in the building behind his trailer home. He says the move has been hard on his family. DAVID FORD/WFDD

That day in court will follow Shelton for years. Because she showed up, she’s now responsible for unpaid rent, and court costs. The demand letter came in the mail just a few days later: a debt of nearly $1,400.

“You should take this seriously, as a summary ejectment will stay on your record for 10 years and could make it difficult for you to obtain credit in the future,” the letter states.

And her name is now marked in another way, too. It’s a bright red flag for landlords. She was a tenant who didn’t pay her rent.

Meanwhile, in the Triad, the rental market is booming. At the Vista Realty home office in Winston-Salem, President Heather Coleman manages 1,000 apartment homes. Business people like her know that after a month or two of unpaid rent, the chances of recovering that money are slim. They have to cut their losses quickly.

Coleman credits much of the company’s longevity and success to careful background checks. Even with that discretion though, a Carolina Data Desk analysis of court data shows the company brings an average of nearly 600 eviction cases every year — among the highest rates for a property management company in Forsyth County.

“The best thing to know about someone is their history,” she says.

Today, Coleman contracts a third-party software company to run detailed screenings on all of her tenant applicants.

“So, we look at the last couple years to kind of see what their history is, especially if they owe any apartment or housing community,” says Coleman. “They’re automatically denied, to be honest, if they do. Again, it becomes a pattern: if someone has skipped out before, they probably will skip out again.”

There are exceptions — if they can demonstrate an ongoing legal dispute for example, or prove that that they’re paying off their balance.

For Wanda Faye Shelton, that’s out of the question. It's the same story for the thousands of renters like her.

Byerly says a routine computer search for an affordable unit might show 40 hits. But once filtered for landlords who don’t screen for evictions, the numbers dwindle down to just two or three. Byerly adds that the people he sees most often are single mothers.

“It was easier when the vacancy rates were 8 to 10 percent for people with evictions and things on their background to be able to still access some sort of decent housing,” he says. “It’s almost impossible for someone in this market that we’re in with the vacancy rates being what they are to access anything decent — or maybe to access anything at all.”

Shelton hoped to get into a public housing unit, but there are no spots available. She’s on the waitlist. Housing Authorities in Forsyth and Guilford Counties simply don’t have the resources to meet the current demand, and wait times run between three and seven years.

For now, with nowhere else to go, Shelton will share a trailer home with her other sister. 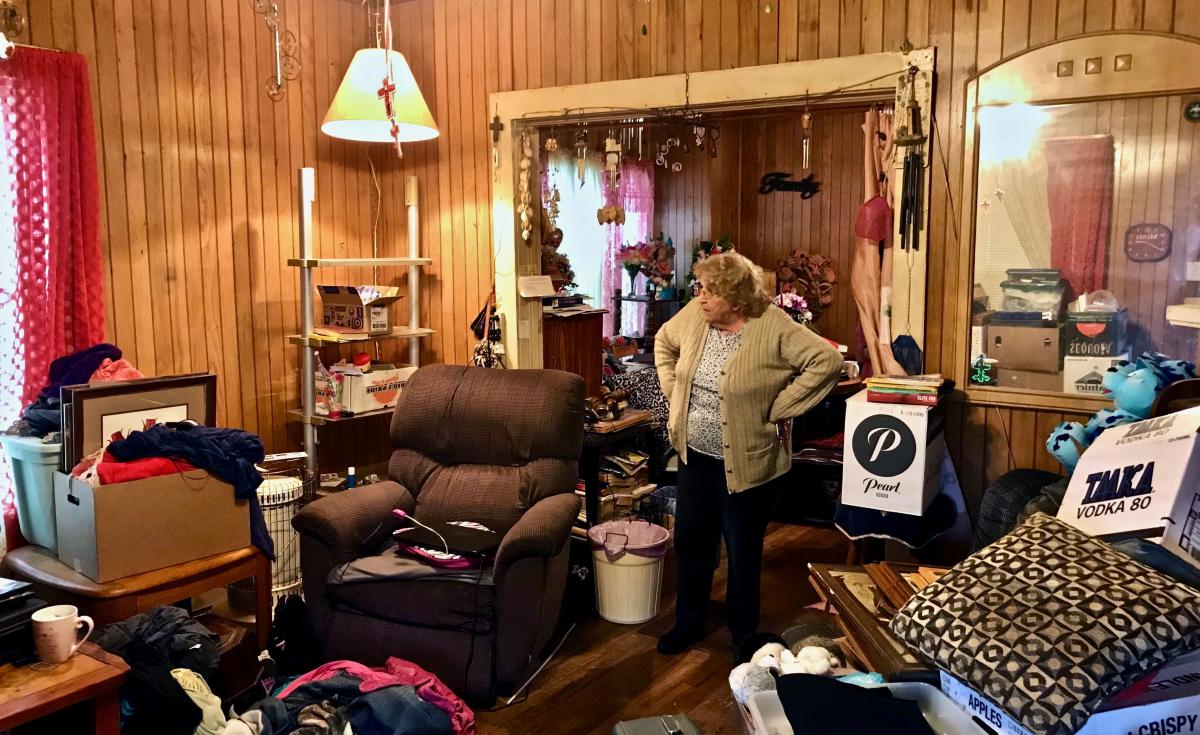 Wanda Faye Shelton scans her living room, overflowing with four generations of belongings, trying to decide what stays and what goes. She says in moments like these she feels overwhelmed. DAVID FORD/WFDD

When asked if the future scares her, she nods.

Shelton’s sister Rachel Barbre, who is herself battling bone cancer, is helping as much as she can with the move, steadying the ship and reminiscing about their mother's final days in this house.

“We have our memories of her being here,” says Barbre. “She wanted her family like a glove fitting tight. And we tried to do that.”

And so it was for the children, grandchildren and great-grandchildren who visited this place. As they load the last boxes, both sisters take small comfort in those memories.

“I worry about Faye, but the hurt is here too in my heart — in my life because this is home,” she says. “But it won’t be home anymore.”

And for Wanda Faye Shelton, she doesn’t know what the future holds. But she knows it won’t be easy. The very safety net programs like Social Security and government housing assistance set up to allow seniors like Shelton to live out their lives with dignity aren’t enough. All she’s left with now is another bill she’ll be unable to pay.

More from On The Margins

Balancing On The Edge: Affordability And Growth In Ole Asheboro