President Obama has cut a nuclear deal with Iran. He has scolded North Korea for its provocative nuclear tests. And he has hosted a series of global nuclear security summits in Washington.

Now there's speculation the president may visit Hiroshima, Japan, site of the world's first atomic bombing, which hastened the end of World War II more than 70 years ago.

The White House has not announced any such plans. However, Obama is set to travel to Japan next month for the Group of Seven summit in Ise-Shima. Hiroshima is just a short hop away and a visit by Obama would be a grand gesture in keeping with his nuclear nonproliferation agenda.

No sitting U.S. president has been to Hiroshima, though Secretary of State John Kerry on Monday became the highest-ranking U.S. official to visit the city's Peace Memorial, located in the only surviving building near the site of the Aug. 6, 1945, bombing.

"It is a stunning display. It is a gut-wrenching display," Kerry said. "It tugs at all of your sensibilities as a human being. It reminds everybody of the extraordinary complexity of choices of war and what war does to people, to communities, countries, the world."

Kerry didn't apologize, though he honored those killed.

If Obama goes to Hiroshima, it would likely be well-received in Japan, though his visit would almost certainly bring criticism from conservative quarters in the U.S.

"I think today, especially with President Obama, this question of a visit to Hiroshima is not just about the war in the past, but it's really, as Secretary Kerry suggested, it's really about the future," Sheila Smith, a Japan expert at the Council on Foreign Relations, told NPR's All Things Considered.

"I think there are obviously delicate sensibilities on both sides," she added, citing a poll in Japan last year that found 79 percent of Japanese felt atomic bombs should not have been used on their cities. "In the United States, when we think of World War II, our war memories revolve around Pearl Harbor." 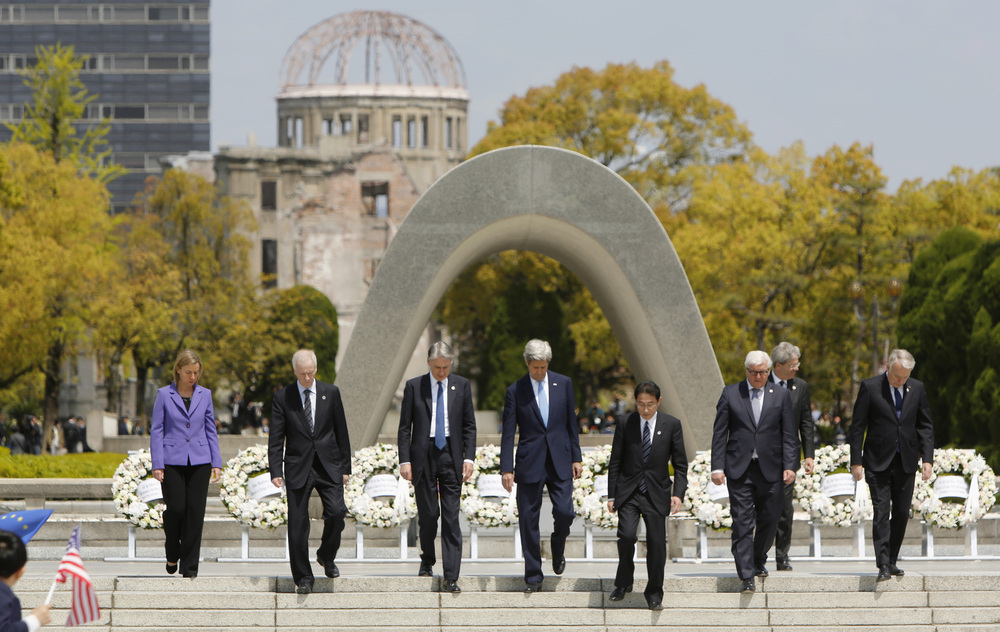 U.S. Secretary of State John Kerry (fourth from left) joins other G7 foreign ministers after placing wreaths at the cenotaph at the Hiroshima Peace Memorial Park on Monday in Japan. Kerry became the highest-ranking U.S. official to visit Hiroshima.

Obama's U.S. critics accuse him of abdicating America's leadership role in global affairs and describe his foreign policy as weak. Critics have at times pointed to symbolic gestures, such as the president's deep bow when meeting Japan's diminutive emperor in 2009.

In the 2012 presidential campaign, Republican candidate Mitt Romney accused Obama of undertaking "an apology tour, of going to various nations and criticizing America." He added, "I think they looked at that and saw weakness."

Some Japanese activists have demanded an American apology. In the U.S., the bombings have generally been seen as necessary to end the war, and saving U.S. lives that would have been lost in a land invasion of Japan.

The U.S. military occupied Japan for years after the war and largely rewrote the country's constitution. The nations have been allies for decades and the atomic bombings have not been a point of friction. They are most often discussed as a cautionary tale about the global dangers of nuclear weapons rather than a lesson on U.S.-Japan relations.

"I think the president would like to do it," John Roos, the U.S. ambassador to Japan from 2009 to 2013, told The Washington Post. In 2010, Roos was the first U.S. diplomat to take part in the annual memorial observance in Hiroshima. Obama "is a person who bends over backwards to show respect to history, and it does advance his agenda."

Last August marked the 70th anniversaries of the attacks, which devastated Hiroshima, and then three days later, Nagasaki. An estimated 140,000 Japanese were killed in the two attacks. The survivors are now in their 80s and 90s.

Japan is still dealing with several issues directly linked to World War II, but the atomic bombings are not at the top of the list. A Japanese poll released last August on the 70th anniversary found that 70 percent of Japanese could not cite the date of the Hiroshima bombing.

In contrast, Japan's World War II military actions in Korea and China contribute to relations that remain strained to this day. And Japan is still demanding the return of the Kurile Islands, which were seized by the Soviet Union at the end of the war.