While Everyone Was Partying At Woodstock, I Was Stuck At Schrafft's

While Everyone Was Partying At Woodstock, I Was Stuck At Schrafft's

I believe I am one of the few people in the world who actually had tickets to Woodstock. Of course, I never got a chance to use them, because on the first day of the festival, I was filling up relish trays and taking dinner orders from customers at Schrafft's.

All this came back to me in a rush of memories when I picked up the new book Ten Restaurants that Changed America. Schrafft's was one of the restaurants listed. "Really"? I thought. "Schrafft's changed America?"

This was a chain of tastefully decorated havens where ladies gathered for light lunches or ice cream and sweets. It always seemed like the epicenter of the comfort zone to me, a place that change zipped past in a hurry to get someplace more interesting. 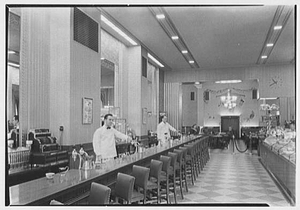 The fountain counter at Schrafft's on Broadway, New York City, circa 1940.

As a kid I loved Schrafft's. I have fond memories of excursions into "the city" with my mother. They started with a train ride that emptied us into New York City's Grand Central station, then out into the street, where millions of people rushed by me as I held tightly to my mother's hand. If it was a shopping trip, we'd head to my mother's favorite store on Fifth Ave., Lord and Taylor's, which just happened to be right across the street from Schrafft's. And that meant we always ended the day with a hot fudge sundae at the counter at Schrafft's. No one has ever been able to match the pure deliciousness of Schrafft's hot fudge.

Eventually, Schrafft's opened a restaurant in suburban Westchester County. And I got my first summer job there. This was no glamour waitressing job. This was hard core. In addition to a very unflattering uniform, all waitresses had to wear a ridiculously unflattering hair net and shoes that were the very definition of clodhoppers. And this is where I found myself in the summer of 1969. Think about that for a minute. A lot was going on in the summer 1969. I watched men land on the moon while standing in the lobby of Schrafft's in between serving pot roast and apple pie.

And then there was Woodstock.

I had to work the first night of the festival but planned to meet up with my friends the next day. By the time I got off work, it was clear that something was happening on that farm in upstate New York that no one had anticipated. By the next morning, the New York State Thruway was backed up practically to the Tappan Zee bridge. The news was rife with stories of unsanitary conditions and a lack of food, shelter and medical supplies. Oh yeah, and by then, Woodstock had turned into a free concert. A lot of the kids who showed up for the festival weren't inclined to pay for it anyway. So, no, I didn't end up joining them. The idea of getting stuck in the mud was distinctly unappealing. Besides, my mother didn't want me to go.

Let's face it, girls who worked at Schrafft's, bought tickets to the biggest free rock concert of the century and actually listened to their mothers would have been a distinct minority at Woodstock ... a minority of one, I suspect.

How the U.S. got into this baby formula mess