When Cultural Heritage Is At Risk, Italy's Art Police Come To The Rescue

When Cultural Heritage Is At Risk, Italy's Art Police Come To The Rescue

The church of San Lorenzo in Accumoli is tiny and dark. The electricity has been out since a powerful earthquake ripped through the area and killed nearly 300 people less than two months ago. It also knocked over three rows of pews on the church's wooden floor, soggy since parts of the foundation receded.

"Don't step over there, you could fall through," warns Silvio Santi, the church caretaker.

Oversize keys jangle as he opens an old medieval door for two Carabinieri police officers from the Comando Tutela Patrimonio Culturale, better known as the art squad. The Italian government has sent them to account for the thousands of artworks that are damaged or at risk since the quake hit on Aug. 24. These include frescoes, mosaics, stained-glass windows, paintings and sculptures, along with centuries-old churches and other historic buildings.

Wearing blue miners' helmets, they shine a flashlight on a gilded altar to reveal a towering fresco of a Madonna and Child from the 17th century on the wall above. The officers snap some photos of the deep cracks that run through the surface, then cover the artworks with a plastic tarp until they can be safely removed and taken to a nearby town for restoration. 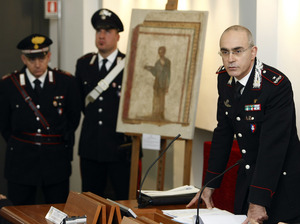 Italian Carabinieri paramilitary police general Giovanni Nistri (right) discusses the recovery and seizure of nearly 60,000 pieces of looted or stolen artwork and archaeological artifacts at a press conference in January 2010. Beside him is one of those pieces, a plaster wall painting dating back some 2,000 years.

Capt. Lanfranco Disibio commands this unit of the art squad. He says they rushed to the epicenter in hilly central Italy as soon as the quake struck.

"Naturally, the first priority was to save human lives," he says. "Our work to save artwork begins once we know that all the people in a specific area have been saved or accounted for. We're like The Monuments Men."

Founded in 1969, the art squad was the first police unit of its kind in the world. Over the decades, they've tracked down artwork looted by the Nazis, priceless manuscripts stolen from libraries and, of course, paintings threatened by disasters both natural and man-made. One unit is currently awaiting a U.N. deployment to Syria.

In the quake zone, where they expect to be busy for months, they work in a crisis unit alongside structural engineers with the fire department, like Ciro Bolognese, who's come from Avellino in southern Italy.

In one dramatic rescue, Bolognese's team lowered firemen through the collapsed roof of the Basilica of Sant'Agostino, a cherished church in the town of Amatrice, and hoisted paintings and statues to safety at great personal risk.

"It's urgent. Because we have to stop the movement of the church. Otherwise, with the aftershocks, other parts could collapse," Bolognese says. "When we repair this church using actual national code for buildings, it will be repaired providing reinforced structures" to withstand future tremors.

Why wasn't it reinforced before the earthquake? 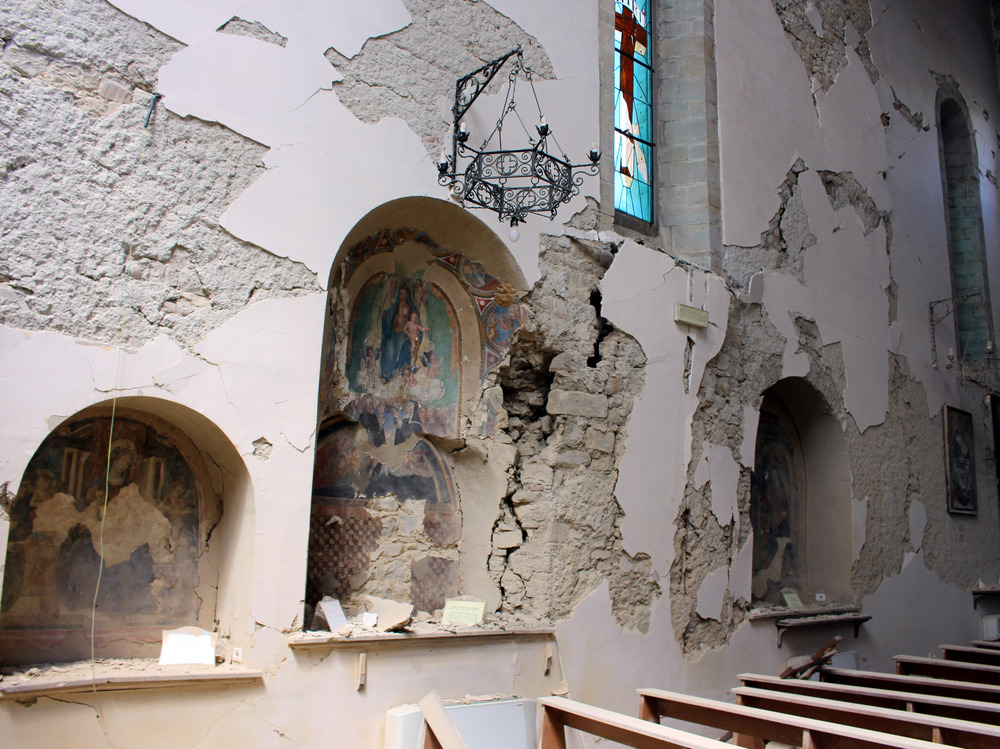 Italy's police art squad worked alongside structural engineers with the fire department to rescue works from the Basilica of Sant'Agostino, a cherished church in Amatrice, shown here on Aug. 24 after being damaged by a magnitude 6.1 earthquake. Firemen were lowered through the collapsed roof and hoisted paintings and statues to safety.

Many are asking it. A Italian state prosecutor is investigating more than 100 buildings that fell down. One of them is the Capranica elementary school in Amatrice. Much of it crumbled to the ground. Fortunately, the quake struck at 3:30 in the morning, and not during a school day, when there would have been more than 200 students inside.

The Italian government has vowed to spend billions on rebuilding all the destroyed towns and making them quake-resistant. Sergio Pirozzi, the mayor of Amatrice, is cautiously optimistic.

He believes his town, where toppling buildings killed 234 people, can eventually be reborn — "just as it was before," he insists. "And these historic monuments will be the keystone of the rebuilding process, everything that symbolized this community. I'm hoping, counting on this."

The local artwork is the backbone of any Italian town, he adds. If that artwork doesn't return, then the people might not, either.

While the gun control debate amplifies, the overwhelming emotion in Uvalde is grief

What we know so far about the school shooting in Uvalde, Texas

Walter almost gave up crossing the Mexican desert. Then a fellow migrant carried him