On a small Israeli military base at Nahal Oz, next to the Gaza border, there's a windowless room where soldiers peer 24 hours a day at video screens. They're watching live footage from cameras monitoring the Gaza Strip, controlled by the militant group Hamas.

Soldiers see a lot – a damaged home getting slowly repaired after the 2014 war, donkeys guided by farmers, suspected Hamas militants on motorcycles. But they can't see underground, where tunnels beneath the border may pose the biggest threat to Israel here.

In the observation room, the soldiers monitoring the screens are all female.

"Girls do it the best," says 20-year-old Orr Israeli, a commander. "They have this commitment. They feel obligated to the job, the mission, without tak[ing] their eyes off the screen."

Each watches three screens. Each screen has five views. They flip between black-and-white, color or heat-triggered pictures. They zoom in and out. As the commander explains the mission, a siren goes off in the room. 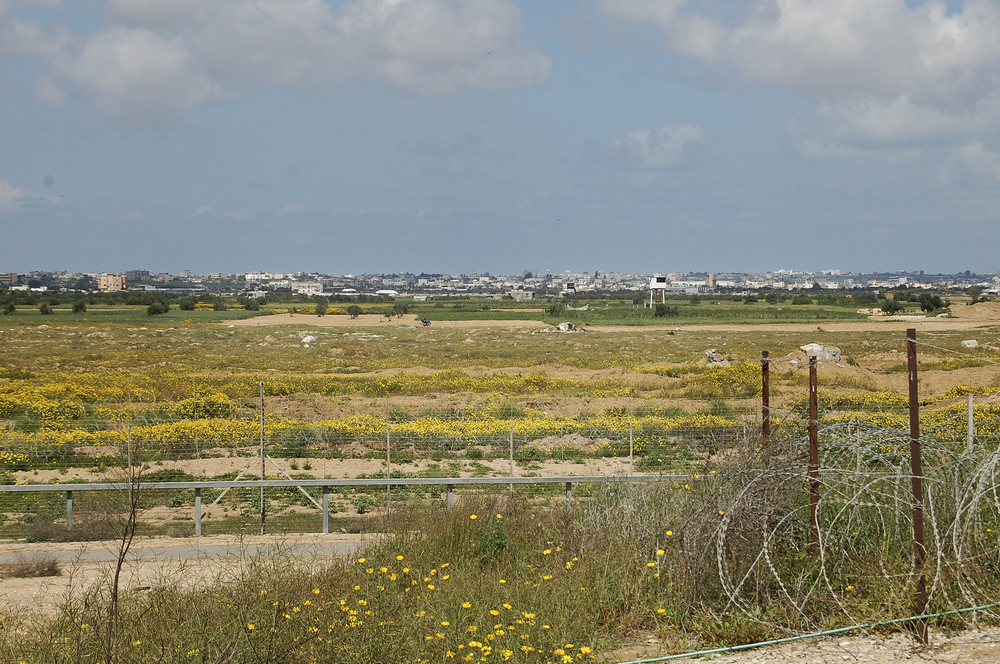 Looking into Gaza from the Israeli side of the fence, soldiers point out a white tower they say is a watch post of the militant group Hamas, and someone they say is a member of the group by a motorcycle in the olive grove at left.

When a Gazan gets too close to the border fence, a soldier marks the spot with a red diamond on the screen. That makes the siren blast. The data goes up the command chain or out to soldiers in the field.

The limits Israel imposes on Gazans approaching the fence cut off access to valuable farmland. Palestinians say this and all the military observation contributes to collective punishment of almost 2 million people.

But Israel says the limits are needed to stop militants from firing rockets. They're often launched from the mile or so area inside Gaza that Israeli cameras are trained on.

During the last war, Hamas militants entered Israel by using tunnels. But these cameras can't observe what might be going on below the surface.

"We don't have electric sensor[s] underneath the ground," Israeli says.

A military spokesman says Israel is actively searching for tunnels, but this unit is not. Outside the windowless camera room, field soldiers conduct first-hand observation. 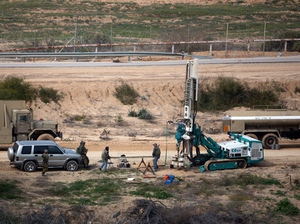 Israeli soldiers watch as a machine drills holes on the Israeli side of the border with the Gaza Strip, as they search for tunnels reportedly used by Hamas for fighting Israel, on Feb. 10.

A 24-year-old field commander and a 20-year-old soldier take me to a border post and pull out their binoculars. The military, citing security, won't let them say even their first names.

"You can see from here the Hamas post, the white post," the soldier says, indicating a white tower 300 yards away.

He hands me his binoculars. I see a red tractor. "That's a farmer," the soldier says. Then he points out a man with a motorcycle, sitting in an olive grove. The Israeli soldier says that man is a "Hamasnik," meaning a member of Hamas.

Militants sometimes plant bombs near the border, targeting Israeli army vehicles that go on both sides of the fence. Tunnel teams try to drill underneath the fence and into Israel.

In 2014, the commander says, "A tunnel came out right here." He points a few yards away. "Eight Hamas militants came out during the war. They can be anywhere."

A camera is permanently stationed at this spot along the fence. A machine gun is, too. Both are controlled by Israeli soldiers back in the observation room.

What is the state of safety in Afghanistan under Taliban rule?

Italy is spending hundreds of millions to save dying villages. Will it work?

Books We Love: 3 recommendations for a non-fiction read