Philadelphia's historic Italian Market is known for its cheeses, meats, fresh pastas and chocolate. Running 10 city blocks through south Philadelphia, it's one of the oldest and largest open-air markets in the country. But what would a tour through this vibrant neighborhood be like without the ability to see?

On a recent Tuesday afternoon, tour guide Andy Maunder stops everyone at a street corner to set the scene for the group.

Their first stop is Superior Pasta, which sells the freshly made stuff.

"You can hear right away the buzz of the freezers on the right-hand side of the store," says Trish Maunder, Andy's wife and one of the co-founders of Philly Touch Tours. She describes the narrow, crammed shop as they enter, and then introduces everyone to owner Joe Lammano.

Lammano quickly cranks up his pasta machine and launches into an explanation about different types of pasta and the merits of homemade versus store-bought. (And don't even get him started on the idea of gluten-free pasta.)

Once he churns the pasta out, he passes raw pieces around to the group so they can hold and smell it.

The two-hour tour includes visits to a chocolate shop, a purveyor of olive oils and vinegars, a cheesemonger and a butcher. They usually run over the allotted time, Trish Maunder says, because people enjoy lingering, trying samples or returning to their favorite store at the end of the tour to buy something.

She says she first started thinking about ways to integrate sensory experiences when her now-grown daughter was born.

"My husband, Andy, and I gave birth to a child who was born blind 30 years ago," she says. "As an artist and an art educator, it was a bit of a shock at first, and I think we got our heads around it by thinking, 'How else do we interpret the world?' "

Last year she co-founded Philly Touch Tours with Austin Seraphin, a computer programmer who was born blind. He's been coding since he was 7 and has spent his career working to make technology accessible to blind people. As an accessibility consultant, he helps companies make their apps work for the visually impaired. 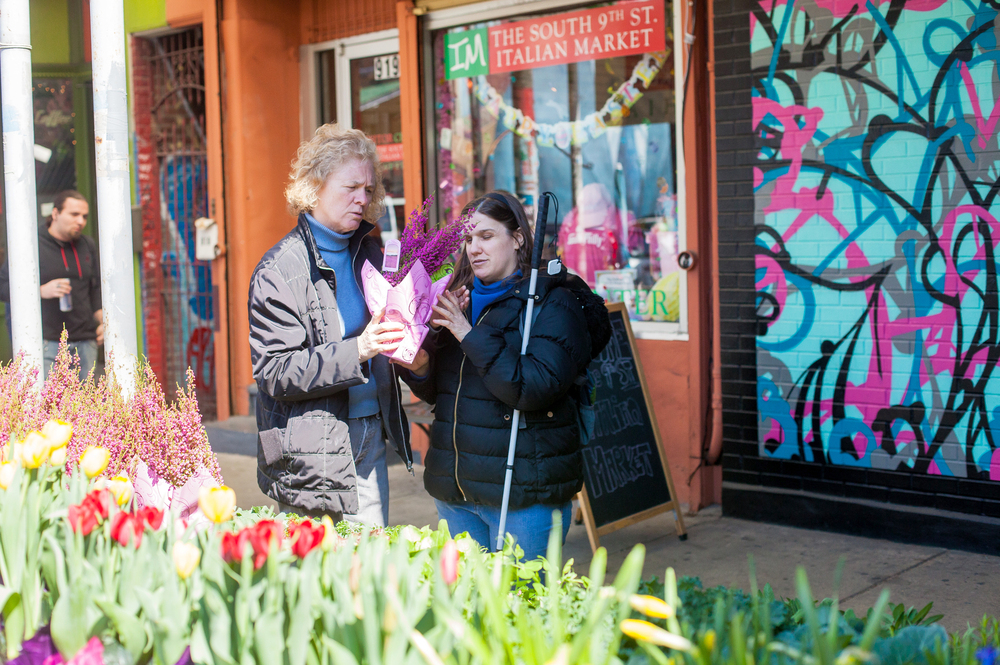 The group started off by offering hands-on tours of the Ancient Egypt exhibit at the University of Pennsylvania Museum of Archaeology and Anthropology. The results surprised even the most seasoned curators, especially when a blind guest discovered that the museum's monumental sphinx has ribs.

"The docents who had been working there for 20 years didn't know that," said Seraphin. "No one had ever been able to touch it."

Seraphin and Maunder say they are hoping to expand Philly Touch Tours to more parts of the city and start offering training to cultural institutions on how to reach out to people who are visually impaired. While many groups will cater to visually impaired children with special tours and programming, that kind of outreach falls off for adults, explains Seraphin.

For Denice Brown from the National Federation of the Blind of Pennsylvania, the tour has helped her appreciate the Italian Market in a new way.

"It's very good — being a person who is blind — knowing a little more about the things that are around me," she says. "Most of us have been to the Italian Market before, but never in this way — when we are given more description, the aroma of the different spices, flowers and fruits and things we have come across."

Neema Roshania is an associate editor with NPR member station WHYY in Philadelphia, where a version of this story first ran.