For These Greek Grandmas, Helping Migrants Brings Back Their Own Past

For These Greek Grandmas, Helping Migrants Brings Back Their Own Past

The migrants on rafts began landing on the rocky shores of Lesbos a year ago. In a pretty village of colorful fishing boats, one of the first people they saw was Efstratia Mavrapidou, 89, who was born here. She's fragile, her eyes clouded by cataracts. But she made her way to shore by cane.

She wanted to be there to embrace the migrants crowded onto those rafts, especially the young mothers who wept as they clasped tiny, sea-drenched babies.

Many were war refugees from Syria, Iraq and Afghanistan. They reminded her of her own mother, Evanthea, who fled Turkey via the Ayvalik archipelago nearly a century earlier, crossing the same stretch of the Aegean Sea on a crowded wooden fishing boat.

"She ran away with only the clothes on her back, holding three little sons," Mavrapidou recalls. "The bells were tolling, the Turkish soldiers were advancing, so she didn't even have time to dress the youngest, who was just a month old. She tore off part of her underskirt to swaddle him."

When Pope Francis joins Patriarch Bartholomew I, spiritual leader of the world's Orthodox Christians, on Lesbos on Saturday, they will visit an island that has the refugee experience in its blood. 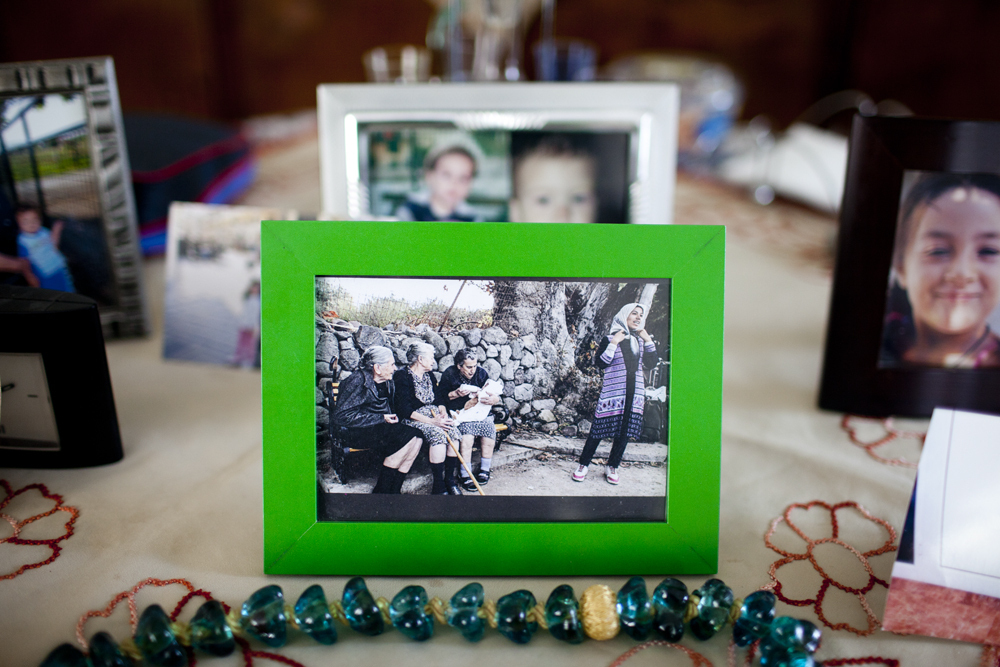 This image of Efstratia Mavrapidou, Maritsa Mavrapidou and Militsa Kamvysi, taken last fall by a Greek photographer, made the grandmothers local celebrities. Kamvysi holds a refugee baby, while the child's mother smiles after changing into dry clothes. A framed copy sits in Kamvysi's living room in the village of Skala Sikaminias, Lesbos.

Many here have roots in Smyrna, or modern-day Izmir, where ethnic Greeks once flourished during Ottoman times. Kemal Ataturk's army drove out at least a million of them after the Greco-Turkish War, which lasted from 1919-1922, as the Ottoman Empire collapsed. They arrived in Piraeus, Thessaloniki and Lesbos traumatized, hungry and homeless.

"There was no place to live in the village when our mothers arrived on Lesbos," says Maritsa Mavrapidou, 85, who's related to Efstratia by marriage. "They cleaned out some empty sheds where olives had been stored and slept there."

We meet in the small, orange-scented stone home of her cousin Militsa Kamvysi, 83. Her mother fled Smyrna, too.

Over the past year, the grandmothers spent months going to the shore, offering migrants clothes from their own closets and homemade cheese pies.

"If the newcomers got off the boat and we saw that they were seasick, we helped them," Maritsa Mavrapidi says.

"We hugged them," Kamvysi says. "We loved them." 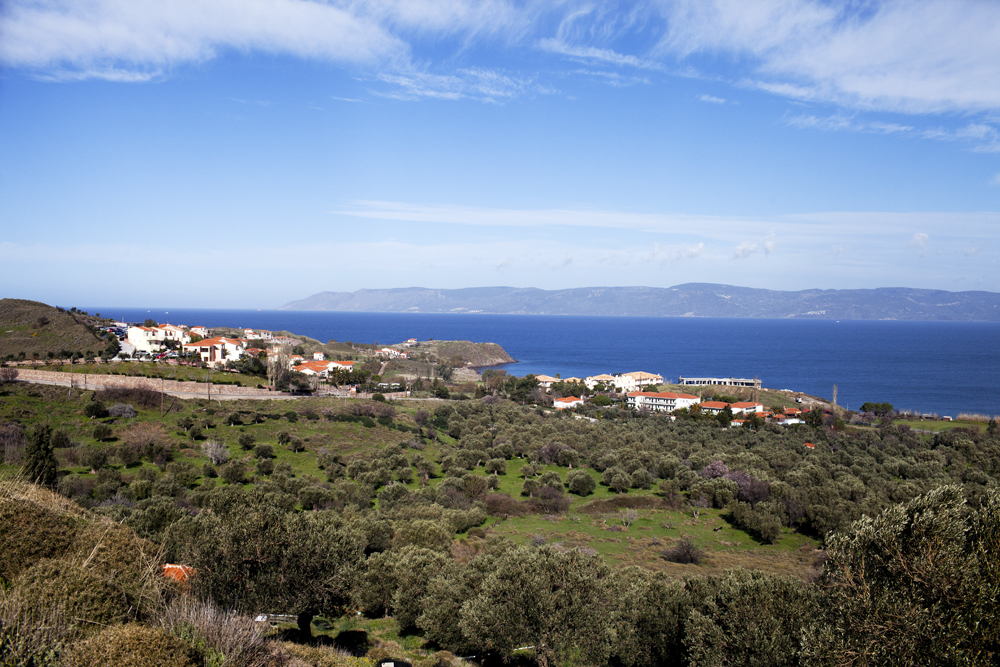 The Turkish coast is visible from northern Lesbos. Many of the 1 million refugees and migrants who landed on Greek shores in the last year arrived on Lesbos.

On a beach a few miles away, Afroditi Vati-Mariolas always had dry clothes and sandwiches for the thousands who landed outside her family's hotel.

Since last month, following a deal between the European Union and Turkey, migrants are picked up by the coast guard and bused directly to a fenced-off camp that resembles a prison.

"People have been comparing this to the camps that existed during World War II, with the wire around it," she says. "This is not my image of how my future was going to be."

She's horrified that migrants are being held in such conditions on Lesbos, of all places.

She's also worried about the summer. Lesbos relies on tourism, and bookings are down 70 percent because of the migrant crisis. The islanders, like the rest of Greeks, are trying to survive their sixth year of a deep economic depression.

"What about all these families now that have been left without income?" Vati-Mariolas says. "And there's no help? Shouldn't the government provide some kind of solution, some kind of subsidy to help them?"

Ilias Lagoudatzis could use the help. A grizzled father of two grown children in his late 50s, he was once a chef at a fancy restaurant that closed last year. Now he's running a mobile canteen outside a transit camp for refugees and migrants.

His customers are aid workers and volunteers; he gives away his sandwiches, chips and juice to migrant children wrapped in Mylar blankets. 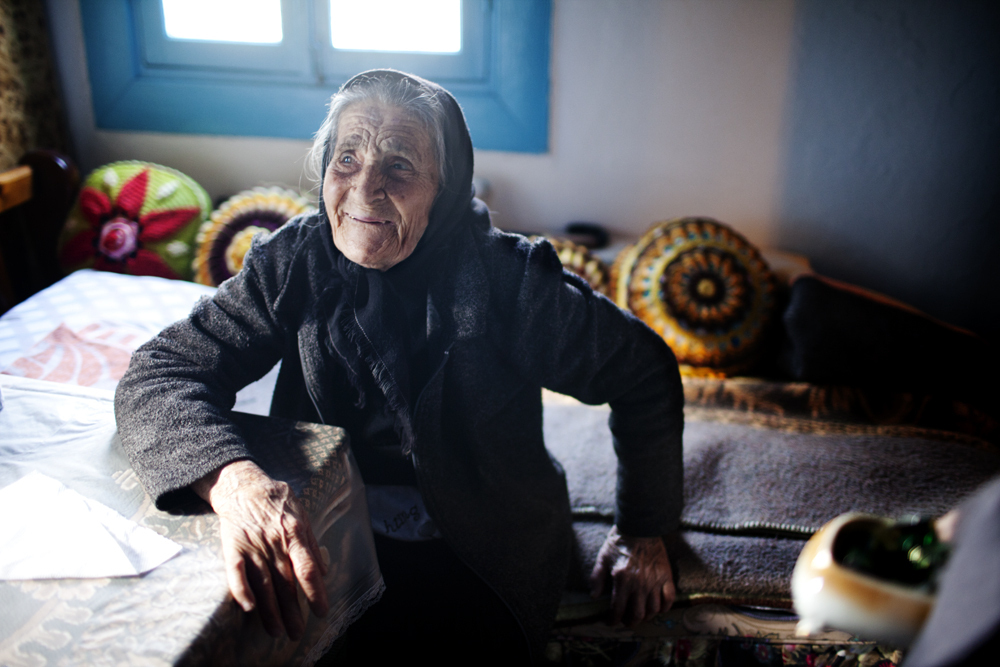 Efstratia Mavrapidou, 89, at her home in the village of Skala Sikaminias, Lesbos. "When my mother arrived here in 1922, there were five impoverished farmers here," she says. "She and her babies slept in sheds where olives were stored."

"About 2,000 of us used to work in tourism here in northern Lesbos," he says. "Of those, only about 100 work regularly with NGOs [nongovernmental organizations] and volunteers. What happens when they go too?"

Back at Militsa Kamvysi's house, there's a framed photograph of her and Maritsa and Efstratia Mavrapidou cooing over a tiny baby. The baby's mother, a young woman in a white-and-blue headscarf, smiles after she has changed into dry clothes.

The photograph made the grandmothers famous. Politicians have visited them, thanking them for their generosity. Kamvysi, who was bottle-feeding the baby in the photo, was even nominated for the Nobel Peace Prize, something that baffles her.

"We were just behaving like human beings," she says, shaking her head.

"I remember when one young mother got off the boat and fell right into my arms," Kamvysi says. "She just cried and cried. She understood that we loved her."

"It's like our mothers were there on the beach, hugging her, too," Mavrapidou says.