One of the most famous quotes by the legendary Ford Motor founder was on the availability of the Model T in only one color: "Any customer can have a car painted any color that he wants so long as it is black."

And so with T-Mobile: America's third-largest wireless carrier announced on Thursday that in about a month, it will start phasing out all of its data plans in favor of one, unlimited-data offering.

"That's the single most-requested thing our customers have ever asked for," T-Mobile's Chief Operating Officer Mike Sievert tells NPR. "More than a million times on social media people have said, 'Why can't we just have it unlimited?Why can't there be the end of data buckets?' Well, we've done it." 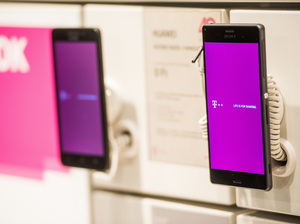 Sprint, whose standing got notably surpassed by T-Mobile in recent years, quickly followed with its own announcement of the cheapest unlimited-data offering around: one line for $60 a month, two lines for $100.

T-Mobile's unlimited offer is $70 a month for one line, $120 for two and an additional $20 for any further lines. Though both carriers' offers come with caveats, including restrictions on video quality for T-Mobile and gaming speed for Sprint.

Fundamentally, this means that now three out of four nationwide carriers now have some kind of unlimited-data offering, as No. 2 AT&T also has an unlimited deal, thought it's only available to customers who also subscribe to the company's video content offerings through DirecTV.

Entner of Recon Analytics explains the historic context: "In the beginning, the carriers offered unlimited data because on a limited stamp-sized screen you can't use much data," he says.

But then came iPhones and other big-screen smartphones, shaking up the calculus. It became harder to predict how much data a carrier should expect to be used under unlimited plans — an important metric for the industry whose networks' finite airwaves suffer when overcrowded.

Now, we've swung back: "The amount of data that customers need has become predictable," Entner says.

Specifically, he's talking about T-Mobile. The company has been offering free video streaming through an offer called "Binge On" so they've got analytics on how much data an average person uses on video. Plus, the unlimited-data offer comes with a restriction on video quality — no high-definition streams — so the estimation is easy.

"You can exactly calculate how much data to offer without losing your shirt," says Entner.

Sprint is the only company that never did away with unlimited-data offers in the first place, Entner says. "For Sprint to get crowded would be a nice problem to have," he says. The carrier always had the most spectrum (think radio frequencies) but wasn't growing customers, Entner says, so "they could afford to keep unlimited plans around — to them, unlimited was the differentiation."

But do people really want — or need — that much data?

Turns out, those are two different questions with somewhat contradicting answers.

T-Mobile's Sievert says not only did the company's customers plead for this offer, but also, as a cohort, they use "triple the music, double the video and 50 percent more data than the industry average."

But surveys have shown that the vast majority of people have little grasp of how much data their Internet activity really requires and often fall for the peace of mind offered by unlimited plans without really needing them.

"People are overpaying for unlimited," Entner says. He cites his own research of wireless billing that showed that the people who go over data caps are typically repeat offenders — presumably those who figured that it was cheaper to pay overage fees than for a higher data plan. (And lately, the top carriers have started going away with overage fees, too.)

"We're going to look back on it and think that it was laughable that we were asked to count up megabytes," says Sievert, too. "This construct was just designed by carriers to get money from you."

T-Mobile, staying true to its aggressive marketing tack, is calling this move a "double-down" on unlimited — an "all-in" for the network. Sievert says this will be the day we'll look back on "months and years from now and say, 'That was the day it all changed.' "

Entner is skeptical. "Ultimately I think they will go back and have a tiered approach," he says. "I don't think that one-size-fits-all will maintain, because one-size-fits-all means that there are two sizes: too large and too small. It never fits."

It's likely that the calculus will shake up again in the future when new online activities become more mainstream, such as augmented or virtual reality, though the impact on the plan offerings is, of course, for now uncertain.

A wildfire near California's Big Sur forces residents to evacuate