Study: The Digital Divide Between Latinos And Whites Is Shrinking

After years of lagging behind other ethnic groups when it comes to accessing the Internet, the "digital divide" between Latinos and whites is now at its narrowest point since 2009.

A new study from the Pew Research Center found that the percentage of Latino adults who report using the Internet increased from 64 percent to 84 percent between 2009 and 2015, a faster growth rate than that of whites going online in the same period (80 percent to 89 percent).

As a result, the gap in Internet use between Latinos and whites shrank from 16 percentage points in 2009 to just 5 points in 2015.

Pew researcher Mark Hugo Lopez says these findings aren't necessarily surprising; they're reflective of larger trends. There are more than 55 million Hispanics in the U.S. today, and the nation's Hispanic residents are the fastest growing population group — and youngest — in the country.

The implications of the study, however, push back at perceptions of who we tend to think of as fluent Internet users. "That story is changing," says Lopez. "And that's based on the diversity of the Latino community."

Immigrant and Spanish-dominant Latino users up, but still a smaller group 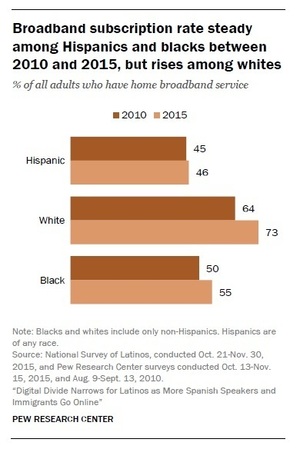 Another consistent trend, the study found, was that Hispanics born outside of the U.S., and those whose primary language is Spanish, still use the Internet at the lowest rates, though that rate is rising.

A large share — 91 percent — of U.S.-born Latinos report using the Internet, while an even larger share — 94 percent — of Latinos who primarily speak English are more likely to go online.

Lopez says Latinos are more likely to live in homes where their only means of getting online is through a mobile phone with Internet access. According to the study, the share of Hispanic adults accessing the Internet through a home broadband connection increased by just one percent since 2010, to 46 percent. Meanwhile, 55 percent of blacks and 73 percent of whites accessed the Internet through a home broadband connection in 2015.

The difference is in what the Pew researchers behind the survey call "smartphone dependence." Only 10 percent of white smartphone owners rely solely on mobile devices to access the Internet. Hispanic and black smartphone users are twice as likely — 23 percent and 19 percent respectively — to rely wholly on mobile phones to get online.

A 2015 Pew study — while not focused specifically on the Latino community — found that the cost of owning a computer and subscribing to a broadband connection at home continues to be a "substantial challenge" and barrier for those who aren't accessing the Internet.

Because of this, Lopez says Latinos are often choosing "between one or the other" — a mobile phone or a computer. This is why Latinos are more likely to live in a home where only a mobile phone is available. But this can have disadvantages. "Even a smartphone can't necessarily substitute for all the things you can do on a computer," says Lopez. "Like job applications for example."

As for why Latinos still lag behind other ethnic groups overall in terms of Internet use, Lopez says it has to do with the diversity of the Latino population.

"Half of the Hispanic adult population is foreign born," says Lopez. "Any trends among immigrant Hispanics is going to have an impact on Hispanics overall."