The Stark Choice In Aleppo: Flee Or Face More Attacks

The Stark Choice In Aleppo: Flee Or Face More Attacks

Russia and Syria have temporarily halted airstrikes on the beleaguered eastern part of Aleppo, the part of the city controlled by the rebels. Instead, Aleppo has been showered with leaflets that urge rebel fighters and civilians to flee.

Russia's Defense Minister Sergei Shoigu said Thursday his country's air force was extending for another day a "humanitarian pause" so civilians in need of medical care can get out of the city.

"We are appealing [to] countries that have influence on armed groups in eastern Aleppo to convince them to stop fighting and leave," Shoigu said.

Russia and Syria appear intent on taking all of Aleppo, and there's no real hope the lull will last. A Russian aircraft carrier group is heading toward the Mediterranean, off the coast of Syria, in what Western military officials say could be a sign of a final push to retake Aleppo.

This tactic of calling on the opposition to give up or face a major onslaught has been used by the Syrian government throughout the conflict.

Russia has helped Syria force the surrender of other, smaller rebel-held towns. And now the Russian Defense Ministry has posted webcams on the routes they say are open for rebels and civilians to flee Aleppo.

But the United Nations envoy, Staffan de Mistura, said what people really want is an end to the bombing campaign in Aleppo. And he's making clear the U.N. doesn't want to be part of any strategy that forces any civilians to leave.

"The U.N. never supports anything that is not a voluntary decision by the local population, or in particular, when they are threatened like has been the case in eastern Aleppo," de Mistura said.

The envoy added that there are currently about 275,000 civilians in rebel-held eastern Aleppo, many of them children. 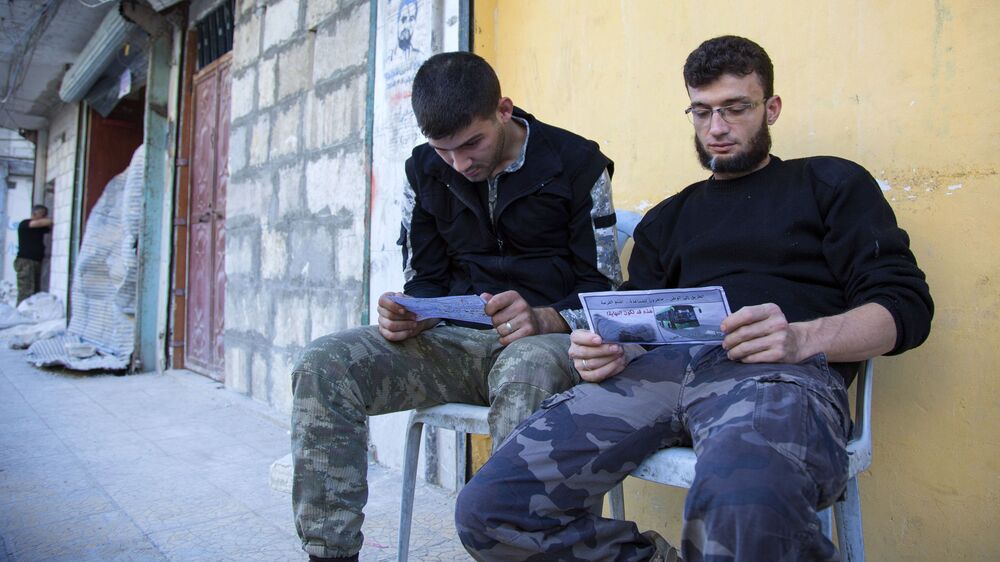 Opposition fighters in Aleppo look at fliers reportedly distributed by the Syrian government. The fliers encourage rebels to leave the eastern parts of the city. The Syrian army and its Russian ally have declared a "humanitarian pause," but there were few signs rebels or civilians were leaving.

Few civilians appear to be leaving. Despite the terrible conditions, they cite several reasons for wanting to stay. In many cases, they support the opposition and want to show solidarity. Some also feel they will lose their homes forever if they leave. And some are extremely poor, and say they have nowhere else to go.

"Their voice needs to be heard and only their voice," de Mistura said of the civilians. "But my feeling is, from what I hear, that the people do not want to leave their places."

He said for now, the U.N. will try to take advantage of the Russian pause to evacuate Syrians in need of medical attention. Russia and Syria have bombed hospitals and clinics in Aleppo on multiple occasions in recent weeks, and the U.N. has repeatedly called for medical evacuations.

There is also a broader cease-fire plan for Aleppo on the table, the U.N. envoy says. But that will require al-Qaida-linked fighters to leave the city and the Syrian government to respect the local administration and let the more moderate fighters stay.

U.S. Secretary of State John Kerry doesn't have high expectations of diplomatic success, given the Russian and Syrian strategy to date.

"Every bomb that's dropped by Russia and the Assad regime is radicalizing more and more people," he said.

U.N. Secretary-General Ban Ki-moon said he welcomes Russia's humanitarian pause, but called it the bare minimum. He said 500 people have been killed in airstrikes in recent weeks, more than a quarter of them children. He said he's often asked whether the U.N. has learned anything from the mass killings of the 1990s in Srebrenica, Bosnia, and in Rwanda.

In Uvalde, tragedy and food bring a community together

A teacher struggles to face students after the Texas school massacre