A tiny village in central Romania is enjoying a huge spike in attention thanks to an unlikely person: Snoop Dogg.

The U.S. rapper was in Bogotá, Colombia, this week when he posted a selfie on Instagram. He presumably meant to tag his location in the South American city, but instead checked in at Bogata, Romania, a small village in the center of the Eastern European country.

Romanian Instagram users aware of Snoop Dogg's affinity for marijuana jumped on the mistake. One user wrote, "Good job, Snoop. You know, there is a lot of hemp there," according to the website Balkan Insider.

Not long after, an enterprising Romanian media company launched an English-language website called visitbogata.com, to provide information for potential tourists. The homepage reads, "Snoop Dogg checked into Bogata, Mures, by mistake — but you don't have to! Find out more on why you should visit."

It goes on to boast that Bogata is the "best place for chillin' in Romania."

The site gives some background information on the newly famous village:

"With only 2000 inhabitants, the commune, situated at approx. 5.5 hour-drive from Bucharest, is the perfect location for a relaxing vacation. Close to Cluj-Napoca, Mediaș, Sighișoara and Târgu Mureș, Bogata is the perfect place to be if you want to relax in nature and take in all it has to offer."

And the site promotes it as a versatile getaway:

"Either you plan a longer vacation in the area, or a short break from the hustle and bustle of the city, Bogata awaits you. Bring your tent, sleeping bag, comfortable shoes and get ready for the chillest weekend you could imagine."

According to Balkan Insider, Silvia Marinescu from the media agency called Kinecto told Republic.ro, "We just wanted to show that if you check into a place in Romania, even by mistake, for sure you can find something special there. Bogata is one of the many wonderful places here." 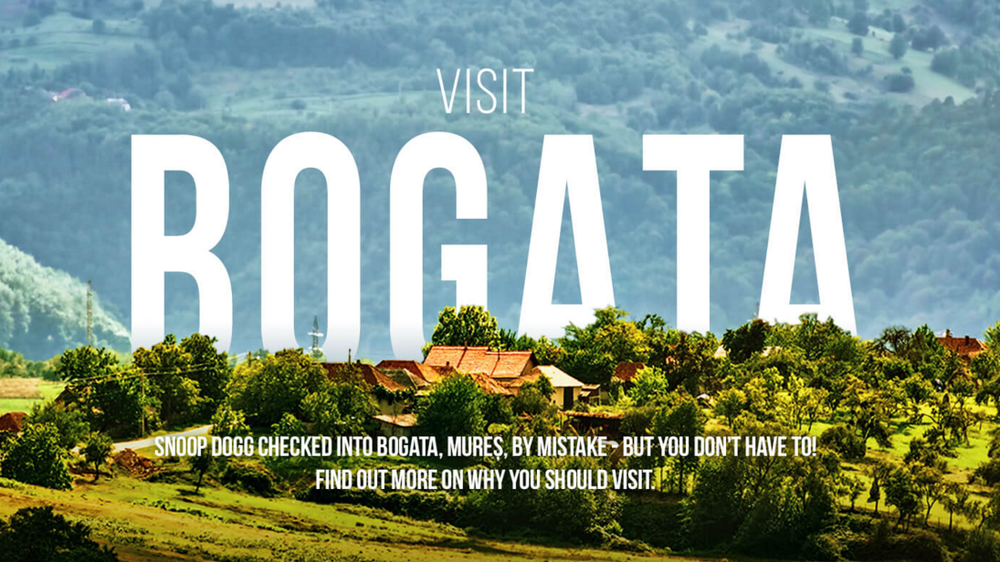 A tourism site for Bogata, Romania, was created not long after Snoop Dogg accidentally tagged the village on Instagram.

The tourism website, which suggests locations to see, foods to eat and places to stay, also pokes fun at Democratic presidential candidate Bernie Sanders for his comment lamenting the fact that Romanians had faster Internet speeds than some Americans.

"Internet speed," the site reads. "Maybe not [be] as high as in the capital city of Romania (we're looking at you, Bernie Sanders), but we'd say it is pretty good. Good enough to quickly upload a selfie."

Balkan Insider reports that the village has not changed much after the high-profile mistake:

"In the meantime, life is quiet and calm in Bogata. Most of the 2,000 people in the village are not much interested in what it is being said about them on the internet. Most do not know who Snoop Dogg is, either.

" 'I don't know how this singer – whoever is he – could make such a mistake. Bogotá is one thing, Bogata something different,' Ioan, a 61-year-old villager said, according to a report in Pressone.ro magazine.

" 'Let's be serious. If he [Snoop Dogg] came here, many people would get scared. They might think he belongs to ISIS. For us, the world starts here and ends just few kilometers away,' another villager called Ana, was quoted as saying, while working in her courtyard."