Schools Hustle To Reach Kids Who Move With The Harvest, Not The School Year

If you're carving a jack-o-lantern tonight, take a minute to think about who picked that pumpkin.

Maybe it was Anayeli Camacho, one of the country's estimated 3 million migrant farm workers, and mother of two. For part of the year she rents a trailer on farmland in Oaktown, Indiana where she works in the fields, harvesting pumpkins and other crops.

But as the fall harvest comes to a close, she and her family will head back down south for the winter, following seasonal work. This is what Camacho has done for the last decade, traveling north and south, from Florida to Indiana, bringing her family, which now includes 4-year-old Ximena, along with her.

Ximena is young, but her education is arguably vital right now. Often children living this lifestyle face interrupted schooling, cultural and language barriers, and social isolation — all factors that inhibit a child's ability to do well in school.

Her preschool, a public school for migrant children ages 2 to 5, is working on that.

"Because their parents move around a lot, they don't have the stability of being in one location for very long where they might be able to take advantage of other preschool services," says Debbie Gries, education coordinator for the Indiana Migrant Regional Center.

"Our goal, when they're 5, is to have them ready for kindergarten," where ever that may be.

The children of migrant workers are some of the country's poorest, most undereducated and hardest to track down.

But tracking them down is exactly what a preschool for migrant children needs to do.

"Staff go into fields trying to find and talk to these families and see if they want to enroll their kids in the program," says Ray Melecio, assistant director for ESCORT, an assistance center for migrant education program. "Sometimes, these families don't want to be found."

And timing is a big issue. Families move with planting and harvest schedules, not the school year. 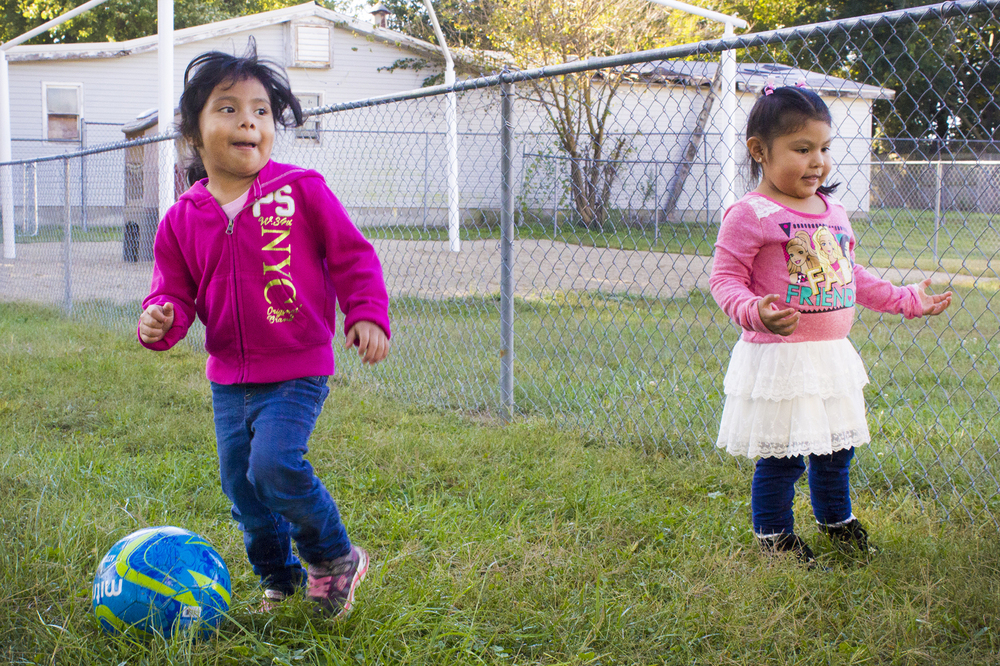 In 2015, the U.S. Department of Education spent about $365 million to fund migrant education programs in 47 states so that children can pick up school again where ever their families land.

The programs across the country take different shapes. Some work through nearby district services. Tutors can visit children at home in rural areas with few families. Or, when there's a cluster of migrant children, a preschool center like Ximena's.

We wondered what a day looks like for these children, so we asked if we could come along.

For starters, the day begins early. At 6:30 a.m. there's a knock on the door at the Camacho family trailer.

Inside, 4-year-old Ximena has been sprinting back and forth for nearly 30 minutes.

Outside, Ximena's bus to preschool sits rumbling, in the dark, on the gravel road. On board, a teacher buckles her into a car seat.

Soon, almost all of the children fall asleep. It's still dark outside. The ride is an hour, weaving through farms to pick up more children on the way.

"We run our morning route really early because most of the parents, they are starting when it's light outside," says Gries, the education coordinator.

The sun is just rising when Ximena and classmates arrive. At school the focus is learning, not just childcare, in both English and Spanish.

Teachers lead children in songs full of English vocabulary – like animals and parts of the body. Children dance, jump and sing.

And then math: learning to count.

There's preschool geometry, too. Sarah Ross, who teaches here, reaches into a bin of brightly-colored shapes.

"What shape is this?" Ross asks, pulling one out.

"Circle!" the group yells back.

Outside, in the preschool's lush green yard, children practice dribbling a soccer ball.

Wrapping up and heading home

Back inside, Mirna Sandoval reads to students. She used to be a migrant worker. Now, she's these children's teacher, reading The Lion King in Spanish. El Rey León.

Soon, they pile back onto the bus where teachers, once again, buckle them into car seats. Now, heading home.

As the bus speeds past fields where many parents work, children sing, "The Wheels on the Bus Go Round and Round." Then, a verse about piggies who go "oink, oink, oink."

"Wait a minute, why's there a piggy on our bus?" she asks.

"Because it has to go to school!" one girl yells.