S. Korean President's 'Rasputin' Was Once Part Of A Soap Opera Storyline 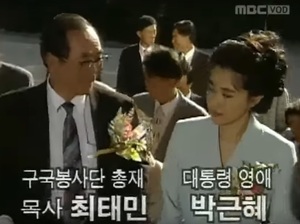 As if the presidential cronyism scandal gripping South Korea couldn't get any more soap-operatic, it turns out the shadowy ties between Korea's future president and a self-proclaimed shaman were actually dramatized in a Korean mini-series, or "K-drama," in the 1990s.

The story of President Park Geun-hye's ties to a mysterious family with unorthodox and varied religious links is riveting South Korea. It's led to calls for her ouster and the lowest approval ratings of any president since the country democratized in 1987.

Park is suspected of giving Choi Soon-sil, a friend of four decades with no official post, extensive access and decision-making power in government affairs, and paving a way for Choi to rake in millions as a result.

Choi is now in jail on charges of abuse of power and fraud, and so are a handful of presidential aides, who are also under investigation. But as the influence-peddling accusations fly, so are the rumors about how much religion and superstition played a role in policy decisions at the highest levels of government.

Choi is the daughter of Choi Tae-min, a man who died in 1994 and has always enjoyed a certain lore here in his home country. Choi the father, from what is known, founded a cult called Eternal World that purported to blend elements of Buddhism, Christianity and Korean shamanism. In the 1970s, when first getting to know now-President Park, he reportedly claimed he could channel Park's dead mother.

Park spoke at one of his religious services in 1975 and maintained a mentee-mentor relationship with him since. Choi later went on to found another religious group, Korea Saving Nation Missionary Corps, which changed names three times. Not long before his death in 1994, Choi gave an interview denying he was a shaman.

The Choi-Park relationship was no secret. In 2007, a leaked cable showed the American Embassy in Seoul wrote of the persistent talk that the late Choi was a "Rasputin"-like figure who enjoyed "complete control" over Park's "body and soul ... and that his children accumulated enormous wealth as a result."

And it was that relationship a Korean soap dramatized in 1995. The K-drama series ran 30 episodes from October 1995 through January 1996 on the network MBC. Called "The Fourth Republic," it dramatized Korean politics of the 1970s, at the end of dictator Park Chung-hee's rule. (The late Park Chung-hee was the current president's father.)

In the scripted drama, President Park the father (and dictator) is acknowledging he knows his eldest daughter (the current, elected president) has been hanging out with Choi Soon-sil's father, the cult leader. Yep. Here's the scene...

Kim: It's about your esteemed first daughter.

Park: You mean that Choi-something 'priest?'

Kim: Yes... he's riding on your esteemed first daughter's favor and committing deeds that cross the line. That Saving Nation Corps is just a facade. He's accepting donations from firms, meddling in different interests and there are even womanizing issues... Here are the details in the report.

Park: (Without looking at the report) I've roughly heard about that. I'm aware of the problem. Geun-hye's words were different. Let's wrap this up for today. You may go.

Again, that was the scene of a scripted mini-series in 1995. Here in 2016, the second-generation Park and second-generation Choi are embroiled in a scandal flowing from this storied relationship that could cost Park her presidency.

President Park, in a second apology to the nation on Friday, denied she was in a cult, which is kind of remarkable for a sitting president to do, in any nation.

"There are stories that I fell into a pseudo-cult and did shamanistic rituals at the Blue House," Park said, referring to South Korea's presidential office and residence. "This is most certainly not the truth."

Park is seeking advice from more traditional religious leaders, however. Monday she met representatives from Korea's Christian churches "as part of the efforts to listen to public opinion and seek advice" from Korean civil society "on how to resolve the current situation and stabilize state affairs," a spokesman said. Wednesday, she will meet with the head of the Jogye Order of Korean Buddhism.