On a November evening in 1977, Megumi Yokota and a friend were walking home from high school in Niigata, a seaside town in western Japan. Yokota was 13 years old and wearing a school uniform. When they were close to Yokota's house, the two said goodbye and went their separate ways.

But Yokota never made it home. Her brother, Takuya Yokota, on a visit this week to the United States, says her disappearance had a profound impact on the family.

"She was like a sunflower to the family, very cheerful, she would brighten the family up," he says. "After she was gone, the family became very dark and somber. It was very difficult for my parents."

The Yokota family searched for years for their daughter. Finally, 25 years later, in 2002, there was a break. North Korea admitted it operated a state-sponsored abduction program, says Victor Cha, a North Korea specialist at the Center for Strategic and International Studies.

Japanese civilians had been kidnapped and used to teach North Korean spies the Japanese language and culture, so they could more easily infiltrate the country. 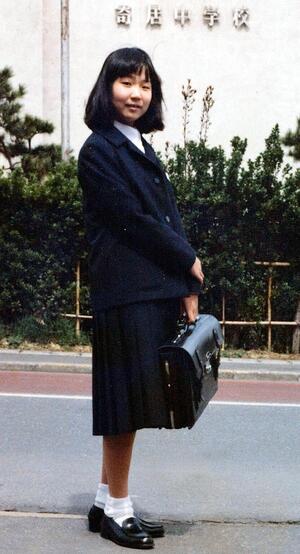 This photo dated April 1977 shows Megumi Yokota, who was kidnapped by North Korean agents later the same year. Megumi was one of eight Japanese nationals who Pyongyang confirmed were dead in 2002. North Korean leader Kim Jong-Il apologized for the kidnapping at an historic meeting with Japanese Prime Minister Junichiro Koizumi.

"The late North Korean leader, Kim Jong Il, admitted these abductions took place and [said] that they would not happen anymore, as an attempt at a political settlement," Cha says.

Kim's admission shook Japan. "This did not resolve the issue for the Japanese public," Cha says. "It enraged them. It made them incredibly angry. And that's why the issue has become such a big one."

Japan believes 17 of its citizens were abducted during the 1970s and 1980s, and demanded their return. North Korea said it took 13 people. In 2002, Pyongyang released five Japanese captives. It said eight others, including Megumi Yokota, had died. It claimed her death had been a suicide, and her cremated remains were returned.

But Japanese officials say DNA testing showed the remains were not Megumi Yokota's. And her brother doesn't believe his sister is dead. His parents were allowed to meet Megumi's North Korean daughter in 2014.

"We still believe to this day she is alive," he says. "We can't give up. I think we need to focus on saving the lives of our families."

Yokota heads Japan's Association of Families of Victims Kidnapped by North Korea. He was accompanied this week to the U.S. by Koichiro Iizuka, whose mother, Yaeko Taguchi, went missing in 1978. Taguchi was a 22-year-old cabaret worker who disappeared after dropping off Iizuka — just a year old at the time — and his sister at a daycare center.

In 1987, a North Korean agent who was arrested and confessed to bombing Korean Air flight 858 identified Taguchi from a photograph as "my teacher, she taught me Japanese," Iizuka says.

Now 39, Iizuka says it's unthinkable that his mother was abducted by another nation.

"A country preying on another nation's citizens, this is something that should never happen," he says.

North Korea says Iizuka's mother died in a car crash. But he doesn't believe it, and wants Japan to pursue the truth about the fate of all its abducted citizens. For years, the Japanese government has pressed North Korea to provide more information about the captives. In 2014, Tokyo agreed to lift sanctions if North Korea would investigate, says Takehiro Shimada, a senior government official working on the abduction issue.

"About two years ago, [North Korea] committed to establish a special committee to investigate all of the Japanese who are in North Korea," he says. "Unfortunately, we haven't any official reply yet."

With no information coming in, and after North Korea launched rockets and conducted a nuclear test this year, Japan has reinstated the old sanctions and slapped on new ones. Now it's turning to the U.S. and the international community for help in finding its abductees.

Yokota, Iizuka and Japanese officials were in Washington and New York this week to talk with administration and U.N. officials. Cha, from CSIS, says at best, their efforts will help remind people about the issue.

The U.S. has its own issues with North Korea, he says — including the incarceration in March of a 21-year-old American for allegedly stealing a propaganda poster.

What is the state of safety in Afghanistan under Taliban rule?

Italy is spending hundreds of millions to save dying villages. Will it work?

Books We Love: 3 recommendations for a non-fiction read