Racial Awakening, Pride And Fear: One Latino Perspective On 'The Obama Effect'

Racial Awakening, Pride And Fear: One Latino Perspective On 'The Obama Effect'

This story is part of an occasional Code Switch series we're calling "The Obama Effect." The series explores how conversations about race and identity have evolved over the course of the Obama presidency. You can read more about the series here.

Earlier this spring I met Pablo Ramirez, a Mexican-American, first-generation college student at San Francisco State University. I had gone to the campus on a day when hundreds of students, including Ramirez, were rallying to increase funding for the school's College of Ethnic Studies.

That college focuses on the histories and contributions of people of color in the U.S., and it was among several that administrators had said would have to get by with less money. But students were having none of it. At a time that anti-minority sentiment seems to be pervading so much of the nation's political discourse, they argued that having a robust ethnic studies department was more important than ever.

Pablo told me that for him, ethnic studies is about rejecting the notion that to be truly American, you have to be white. It's an idea that he believes too many Americans still embrace. 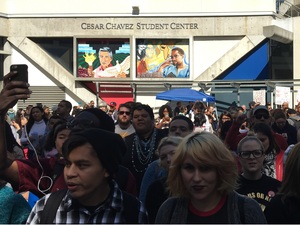 One of the first classes Pablo took at San Francisco State was an ethnic studies course, in which he learned about Mexican-American protest movements and other civil rights struggles. "And it really was the spark that lit the flame to just understand my history as a Latino male," Pablo says. "It wasn't until really college that I was able to identify my race."

Before college, Pablo mostly thought of race in terms of blackness and whiteness. But after he began his studies, he was suddenly noticing race in his own life, particularly when he would go home to Los Angeles to visit his parents. They're both Mexican immigrants who are now U.S. citizens.

"I started noticing that my mother would be called wetback," he says, "that people would say, 'Oh, she's an idiot because she doesn't know English.'" But when he'd try to point these slights out to his parents, he says they'd brush him off because they're uncomfortable talking about race and racism. But Pablo says he won't be silent: "I'm not here to play nice to these ignorant people; I'm here to defend myself and my family and my heritage."

Scared in his own country

That he even has to defend his family's heritage makes Pablo angry. He was born in Los Angeles, and his parents are U.S. citizens. They came to the U.S. from the border town of Mexicali in the early 1980s. After living in the country illegally for a few years, they gained amnesty through a bill signed by President Ronald Reagan in 1986.

Through it all, Ramirez says, his parents worked hard to provide for the family, instilling in him the ethic that drove him to pursue a college education. "My father calls it the American Dream," Ramirez says, "though I wonder how much of a dream it really is, when they still live in poverty and have racist slurs used against them."

When I ask Ramirez if I can meet his family, he invites me to come along when he goes home for spring break a few days after the campus protest. I meet him at the Greyhound bus station in downtown San Francisco as he waits for his overnight bus to Los Angeles. In his bag, he has three forms of identification: his school I.D., his driver's license, and his U.S. passport.

Ramirez says his parents urge him to carry all three anytime he travels, "because if you just look at me, I'm just a Latino male. I may or may not be undocumented. And my parents and I are afraid that they'll just profile me and whisk me off. Because of the political climate, I'm scared."

The Ramirez family owns a small stucco house in South Los Angeles. A few chickens cluck in the backyard, though the city recently asked Ramirez's father, Daniel, to get rid of them. He plans to comply, though it's another small reminder that he doesn't fully belong. 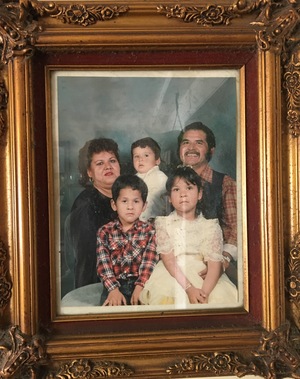 A portrait hangs in the Ramirez family living room in Los Angeles. Pablo Ramirez, center, with his parents Maria and Daniel, and his siblings, Ramon and Daniela.

"I only planned to come for a year or two, maybe buy a truck, and then go back to Mexico," Daniel tells me. That was more than 30 years ago. "And here I am."

As so often happens to immigrants who come to the United States with similar expectations, life changed the plan for Daniel and Maria Ramirez. They had children. The kids started going to school, learning English and growing up American. "And even though you think of them as Mexican," Mr. Ramirez says, "they think of themselves as American, they learn American customs. They're from here."

At some point, the Mr. and Mrs. Ramirez realized their life was here, that they wouldn't be returning home. And so in the late 1990s, they decided to become citizens. But as much as they appreciate living in the U.S., the two of them have never felt truly American. "For us, being American is more about respecting U.S. laws, and knowing those laws also protect us," Mrs. Ramirez says.

This feeling — that even though they're U.S. citizens, it isn't really their country — seems to get to the heart of the tension Pablo has felt with his parents. He wants them to be more assertive, to stand up for themselves and demand their rights as Americans. But they don't really feel American, and so they're more willing to put their heads down, work to get ahead, and endure the little indignities their son can no longer tolerate.

A glimpse of hope

For Mrs. Ramirez, this feeling of not really belonging began to change when Barack Obama was elected president. She says she'd never seen so many young brown and black people go to the polls in her neighborhood. She felt like Obama was a president for her family and her community. She hoped he would deliver on immigration reform, because even though by 2008 she and her husband were already U.S. citizens, an immigration bill would send the message that immigrants like her and her husband play an important role in this country.

But that reform never came, something that Mr. and Mrs. Ramirez blame more on an intransigent Congress than on President Obama. In the meantime, his administration has deported 2.5 million people. In the current election cycle, anti-immigrant rhetoric has reached a fever pitch.

Coming home can be a challenge for Pablo. While he loves seeing his siblings and gossiping with his mother, he also has to remind himself that he's not at school anymore. The jargon and buzzwords of academia that have become his currency don't fly here. His big pronouncements about structural racism don't always land.

Pablo's older sister Daniela puts it like this: "He likes to rant." And she says she checks him constantly. "I tell him all the time, 'You need to tone it down with your big words,'" she says. Everyone laughs when Daniela says this, including Pablo. They all know it's true. 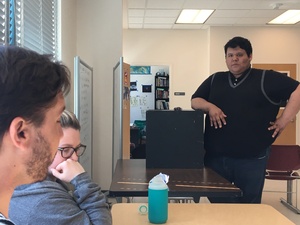 Ramirez gets feedback after presenting in a communications class. He delivers speeches about the struggles of being bilingual and bicultural in the United States.

He and his wife have been thinking a lot about Donald Trump, his anti-immigrant rhetoric, and his supporters — the ones who believe in that message. "They want to go back to a time when this was a whiter country," Mrs. Ramirez says.

But her husband says that's not possible, "because back then, people of color didn't have a voice or a vote. And now they do."

Mr. Ramirez says he's proud of his son's willingness to speak out in defense of his family and immigrants generally. Pablo recently traveled to Florida to compete at a national speech and debate competition. His speech was about how hard it can be for immigrants and their families to embrace their heritage when they face so much pressure to assimilate.

Pablo Ramirez says one thing he's learned since he's gone to college is that he should embrace all of his heritage proudly and unapologetically. "I identify as Mexican-American, and I wouldn't give up either of my identities," he says.