Pigeons in London have a bad reputation. Some people call them flying rats. And many blame them for causing pollution with their droppings. But now the birds are being used to fight another kind of pollution in this city of 8.5 million.

"The problem for air pollution is that it's been largely ignored as an issue for a long time," says Andrea Lee, with the London-based environmental organization ClientEarth. "People don't realize how bad it is, and how it actually affects their health."

London's poor air quality is linked to nearly 10,000 early deaths a year, Lee says, citing a report released by the mayor last year. If people were better informed about the pollution they're breathing, she says, they could pressure the government to do something about it. 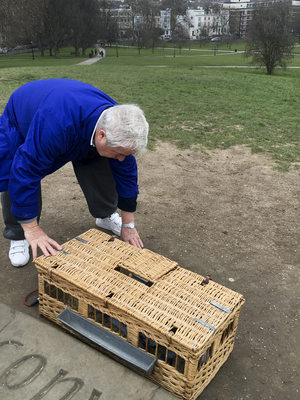 Brian Woodhouse, a member of Britain's Royal Racing Pigeon Association, brought a wicker cage holding seven of his racing pigeons to Regent's Park, where they were fitted with air quality sensors.

Nearby, on a windy hill in London's Regent's Park, an experiment is underway that could help — the inaugural week of flights by the Pigeon Air Patrol.

It all began when Pierre Duquesnoy, the creative director for DigitasLBi, a marketing firm, won a London Design Festival contest last year to show how a world problem could be solved using Twitter. Duquesnoy, from France, chose the problem of air pollution.

"Basically, I realized how important the problem was," he says. "But also I realized that most of the people around me didn't know anything about it."

Duquesnoy says he wanted to better measure pollution, while at the same time making the results accessible to the public.

"So," he wondered, "how would we go across the city quickly to try to get as much data as possible?"

Drones were his first thought. But it's illegal to fly them over London. 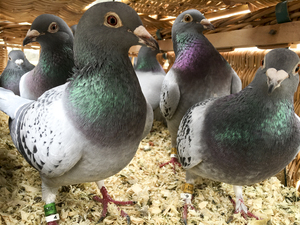 After the pigeons are fitted with pollution sensors, they are released into different parts of London. Londoners can then get live air quality readings via Twitter.

"But pigeons can fly above London, right?" he says. "They live — actually, they are Londoners as well. So, yeah, I thought about using pigeons. And not just street pigeons, but racing pigeons, because they fly pretty quickly and pretty low."

His next task was to link up with a pigeon racer and his flock. That's when Brian Woodhouse came into the picture. He's a member of the Royal Racing Pigeon Association. He's kept pigeons for about 65 years.

Woodhouse has brought a wicker cage holding seven of his racing pigeons out to the park. The birds will be fitted with pollution sensors and released in different parts of the city all week. The readings are analyzed to inform Londoners about their air quality.

Woodhouse says pigeons are perfect for the project.

"I liked the sound of it," he says. "I thought it was an extremely good idea, knowing that the pigeons in the First World War and the Second World War used to fly with messages, vital messages, for our troops and allies."

Want to find out how toxic your air is? Ask me. A pigeon. Tweet just your London area to @PigeonAir #PigeonAir pic.twitter.com/0k9iNf8F4c

"These little sensors track your exposure to nitrogen dioxide, to ozone, to these gases that impact your health," says Romain Lacombe, Plume Labs' founder and CEO. "And that's the technology we're going to fly on the back of a pigeon through London today."

Lacombe says his company has developed a mobile app that tracks pollution in about 300 cities, so that residents can adapt their outdoor activities if the air is toxic. Londoners can get live readings from the Pigeon Air Patrol through Twitter or on a website devoted to the project.

So it might be time for Londoners to have more respect for their pigeons. The birds may just be helping to improve the quality of the city's air.

Roe v. Wade's future is in doubt after historic arguments at Supreme Court