This weekend, London was burning — again.

But no buildings were harmed in the making of this inferno. Art installations and a wide variety of pyrotechnics marked the 350th anniversary of one of the city's most infamous disasters. 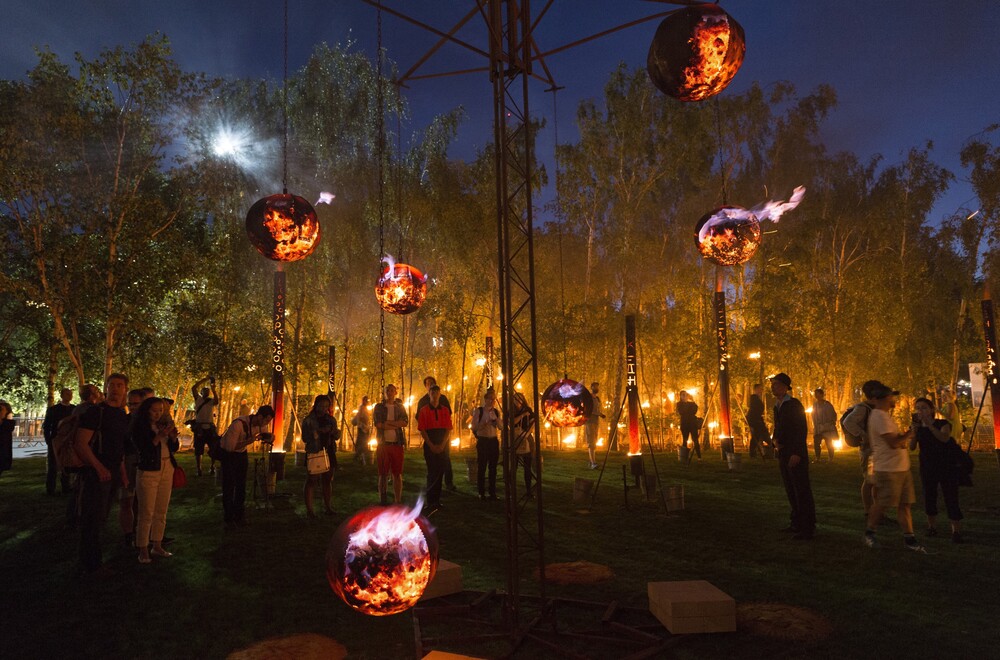 Fire Garden — part of the London's Burning festival — transformed the front lawn of the Tate Modern in London into a crackling, after-dark adventure made from burning structures, cascading candles and flickering flowerpots. The installation is shown as it appeared on Thursday.

In 1666, the Great Fire Of London raged for days. It started on Sept. 2, in a bakery, and roared through the metropolis until Sept. 5.

The crowded city was full of wooden homes, and the fire spread rapidly. Thousands of buildings were destroyed. Some 100,000 people were left homeless.

Wenceslaus Hollar's "Prospect of the Citty of London, As It Appeared, In The Time of Its Flames" shows the Great Fire of London as seen from across the river, in Southwark.

John Evelyn, an English diarist, witnessed "the miserable and calamitous spectacle" and recorded the apocalyptic scene in his journal:

"All the sky was of a fiery aspect, like the top of a burning oven, and the light seen above 40 miles round about for many nights. God grant mine eyes may never behold the like, who now saw above 10,000 houses all in one flame; the noise and cracking and thunder of people, the fall of towers, houses, and churches, was like an hideous storm, and the air all about so hot and inflamed that at last one was not able to approach it, so that they were forced to stand still and let the flames burn on, which they did for near two miles in length and one in breadth. The clouds also of smoke were dismal and reached upon computation near 50 miles in length. Thus I left it this afternoon burning, a resemblance of Sodom, or the last day. ... London was, but is no more!"

But London did survive the devastating fire. In fact, given the scale of the conflagration, the death toll was astonishingly low. Only six deaths were recorded, and while the actual toll was no doubt higher, many people did manage to evacuate and escape the flames. 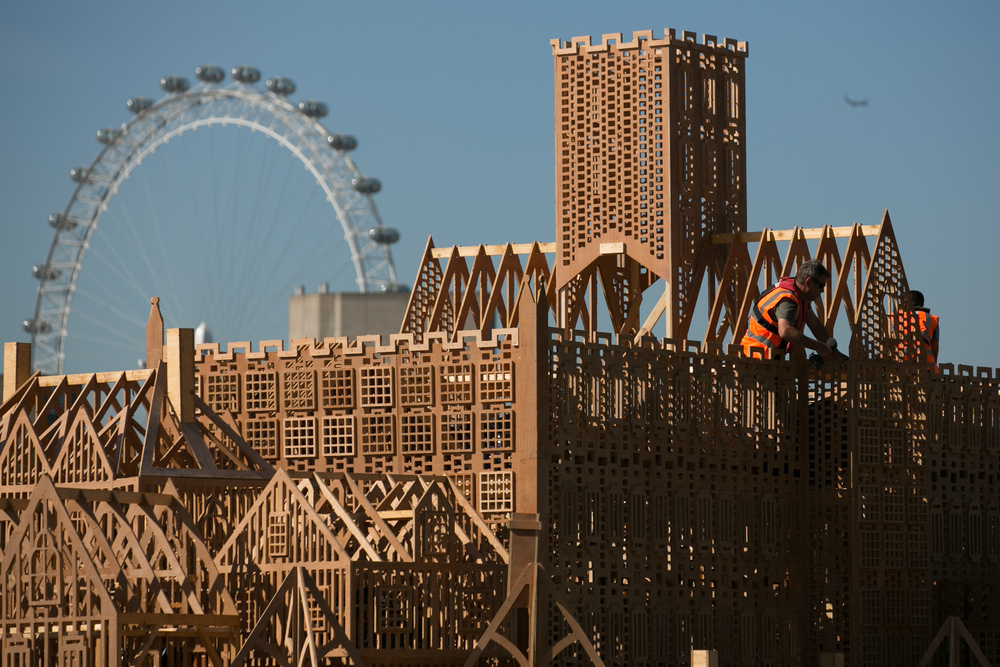 The finishing touches are put on a 400-foot wooden sculpture of London's 17th-century skyline on August 30 — with the London Eye, a 21st-century symbol of the city, visible in the background. The replica of the old city was floated in the Thames and set on fire on Sunday, in an installation called London 1666, designed by David Best as part of the London's Burning festival.

The city was permanently transformed. At least 13,000 buildings were destroyed. Christopher Wren took the opportunity to rebuild St. Paul's Cathedral and designed his iconic dome.

Across the city, builders turned to stone instead of wood — for the obvious reasons — and an insurance industry was created, NPR's Frank Langfitt notes. 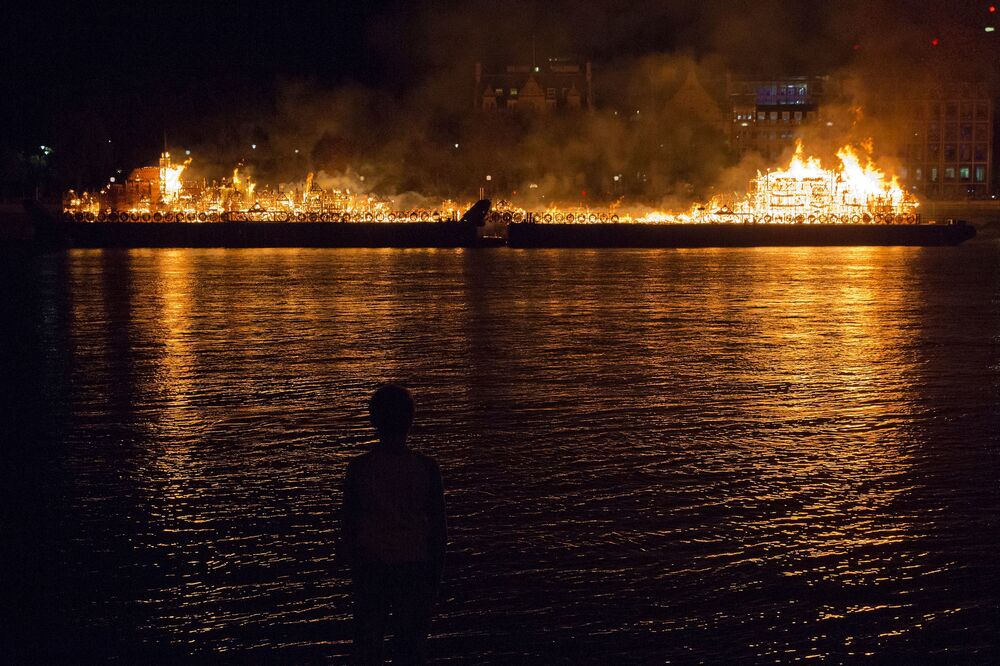 A person stands on the shore watching a replica of 17th-century London burning on a barge in the Thames on Sunday. In 1666, an inferno destroyed most of the walled inner city dating back to Roman times — a bustling, congested maze of tightly-packed wooden houses. It forced London to rebuild anew from the ashes.

The London's Burning festival this past weekend marked the anniversary of the massive fire, and celebrated London's ability to rebuild and recover.

At the Tate Modern, kinetic fire sculptures celebrated the beautiful side of flames.

Flames were projected onto the roof of St. Paul's Cathedral and the National Theatre.

A series of massive dominoes, toppling along a carefully-planned path more than 4 miles long, evoked the chain of cause and effect that led the fire to spread from one bakery kitchen to the entire capital.

At the end of the domino chain, there was — what else? — a conflagration.

The most literal commemoration came on Sunday, when a wooden replica of 17th-century London was floated in the Thames and set on fire. 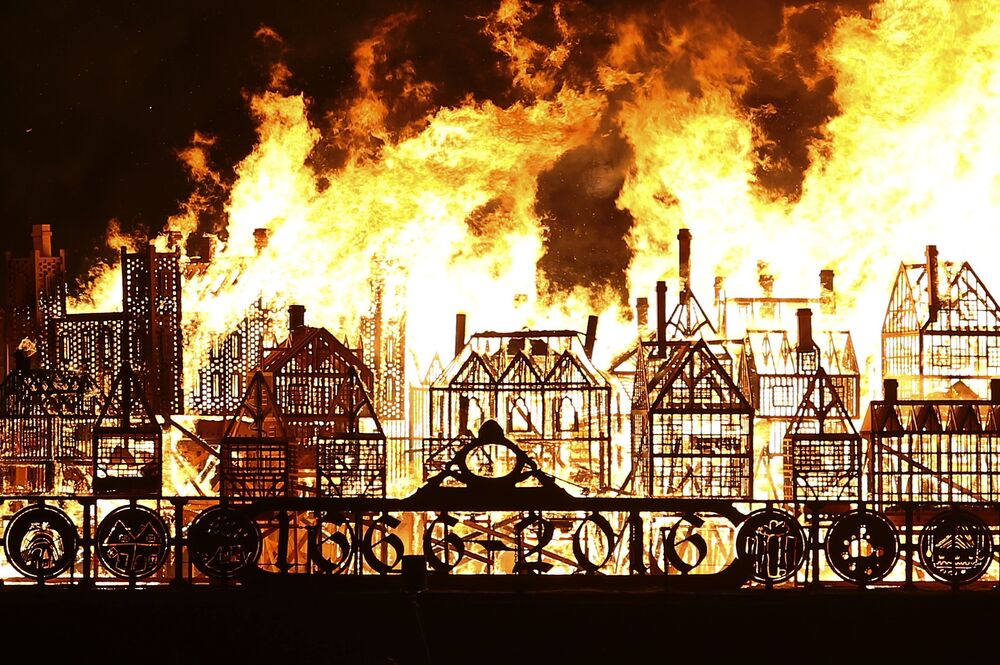 The replica of 17th-century London burns on Sunday.

"The scale model of the old city sat on a barge and stretched more than a football field," Frank reports. "The flames rose several stories high — and made for a spectacular sight."

You can see it for yourself in a video from Visit London.

Media Titan Sumner Redstone, Who Made Viacom A Global Empire, Dies At 97

U.S. Puts Kodak Deal On Hold Amid Scrutiny Of Its Finances

How The Coronavirus Has Upended College Admissions

Tracking The Pandemic: Are Coronavirus Cases Rising Or Falling In Your State?