One Year After Fatal Amtrak Derailment, Still Waiting For Answers

One year after an Amtrak train derailed in Philadelphia, killing 8 passengers and injuring scores of others, a key question remains unanswered: Why was the train going so fast?

The train, Amtrak #188 en route to New York City, had left the 30th Street Philadelphia station and gradually increased speed to over 100 MPH, but it was supposed to slow down to 50 MPH as it entered the Frankford curve. Instead, the train continued to gain velocity, hitting top speed of 106 MPH. The engineer did apply the brakes, but it was too late, and the train's locomotive and seven passenger cars hurtled off the tracks. Eight passengers died and more than 200 were injured.

Federal investigators plan to provide some answers next week. The National Transportation Safety Board has scheduled a meeting Tuesday to detail the probable cause of the Amtrak derailment.

Investigators have ruled out brake, track, engine, and signal failures as potential causes and are focusing on human error. The train's engineer, 32-year old Brandon Bostian, could not explain why he kept accelerating, telling investigators he cannot remember the final moments before the crash. Drug and alcohol testing came back negative and investigators determined he hadn't been using his cell phone. 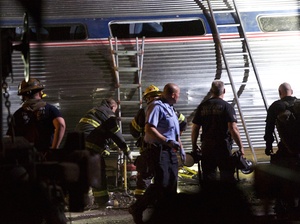 Emergency workers search for injured passengers after an Amtrak train carrying more than 230 from Washington to New York derailed in May 2015.

Regardless of why the train was going too fast, the nation's top railroad official says "this accident was preventable."

Sarah Feinberg, Administrator of the Federal Railroad Administration says a high-tech, GPS-based safety system called Positive Train Control could have slowed down the train and prevented the derailment. The system can override the engineer and automatically slow or stop a train if exceeds the speed limit or misses a warning signal.

Feinberg calls Positive Train Control "just absolutely the most important thing we can do to protect the lives of rail passengers."

The PTC technology was in place on this section of Amtrak's Acela line between Washington, DC and New York City, but still hadn't been switched on. Amtrak officials say it still needed testing to work out any bugs in the system at that time and is fully implemented there now.

"Positive Train Control is now up and running along the Northeast Corridor, so in the very spot where this accident happened," says Feinberg, adding "but it's not across the country yet and we have a long way to go before we get there."

She says the nation's freight and commuter railroads are making progress in implementing the system, "but not enough progress."

Late last year, over the objection of Feinberg and the NTSB, Congress extended a deadline for railroads to fully implement the system to 2018.

But she says railroad travel is significantly safer today than it was one year ago today. "Rail is as safe as it has ever been, but that doesn't mean that we've done enough."

Meanwhile, some of the survivors of the horrific crash are still struggling to recover.

"I have pain 24/7," says Robert Hewitt, 58, a BASF regional security officer who remembers being thrown from his seat and hitting a luggage rack when the train derailed the night of May 12, 2015. Hewitt told reporters at a news conference in Philadelphia today that "right before I lost consciousness, I crashed head on with another gentleman and I woke up laying on a pile of rocks. All my clothes had been ripped off, I couldn't move my legs... I was scared laying there."

When first responders arrived, he says "one of them shined his flashlight on my head... I remember him saying, 'this guy's got to go now. The whole back of his head is coming off'."

The year since the train crash has been a seemingly endless series of doctors appointments, physical therapy sessions and nightmares for Hewitt, who calls it "terrible."

As he labored to breathe because his rib cage still has not fully healed and his lungs cannot fully expand, he told reporters, "the two outcomes for me were paralyzed for life, or death."

Hewitt and his wife and daughter later attended a private memorial service to mark the anniversary of the derailment in Philadelphia, where he hoped to reunite with the first responders who rescued him.