"Seventy-one years ago, on a bright, cloudless morning, death fell from the sky and the world was changed," President Obama said Friday, in the first visit by a sitting U.S. president to Hiroshima, Japan.

In 1945, the United States dropped the first atomic bomb used in warfare on that city, killing an estimated 140,000 people. A second bomb was dropped on Nagasaki three days later. Within weeks, Japan surrendered, ending the war in the Pacific Theater.

Today, the city of Hiroshima is home to a park dedicated to honoring the dead and calling for peace. During Obama's historic visit, the president spoke at length about the costs of war and the need for peace and nuclear disarmament, without apologizing for any U.S. actions during World War II.

We have known the agony of war. Let us now find the courage, together, to spread peace, and pursue a world without nuclear weapons.‎

President Obama, in the guestbook at the Hiroshima Peace Memorial

During the visit, Obama and Japanese Prime Minister Shinzo Abe walked silently down a long path in the park. A young woman handed the president a wreath, which he laid by the Memorial Cenotaph, a monument containing the names of the dead. A moment later, Abe was handed a wreath and did the same.

Speaking afterward in Hiroshima Peace Memorial Park, Obama said he was there to mourn the dead of World War II, and that the memory of Aug. 6, 1945 — the day the bomb was dropped on Hiroshima — "must never fade."

"That memory allows us to fight complacency," he said. "It fuels our moral imagination. It allows us to change."

Obama spoke about the "silent cry" of Hiroshima, and the suffering wrought on the day the bomb fell. "In the image of a mushroom cloud that rose into these skies, we are most starkly reminded of humanity's core contradiction: how the very spark that marks us as a species — our thoughts, our imagination, our language, our tool-making, our ability to set ourselves apart from nature and bend it to our will — those very things also give us the capacity for unmatched destruction," he said.

The president called for the world to unite to prevent such violence from happening again. Nations need the ability to defend themselves, Obama said, but countries with nuclear arsenals "must have the courage to escape the logic of fear and pursue a world without them.

"We may not realize this goal in our lifetime, but persistent effort can roll back the possibility of catastrophe."

As NPR's Scott Horsley reported, Obama spelled out his vision of a world without nuclear weapons early in his presidency. That stated goal contributed to his winning of the Nobel Peace Prize.

But since then, he has made only "modest progress" in that campaign, as the president himself put it in an interview with the Japanese press this week.

Speaking at Hiroshima on Friday, Obama spoke more broadly — calling not only for an end to nuclear weapons, but for a broader peace. He called for the "radical and necessary notion that we are part of a single human family."

"We must change our mindset about war itself," Obama said.

After the speech, Obama met briefly with survivors of the Hiroshima attack who had been sitting in the audience during his remarks.

The Peace Memorial Park includes memorials for the dead, the iconic bombed-out Peace Dome — a building preserved as it looked after the attack — and a museum on the bomb and its aftermath. The entire park is dedicated to the pursuit of peace and nuclear disarmament. 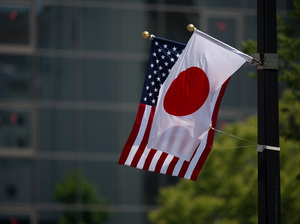 A Japanese and a U.S. flag are seen next to the Hiroshima Peace Memorial in Hiroshima on Friday.

In a visit heavy on symbolism, the street in front of the Hiroshima Peace Memorial Museum was lined with Japanese and American flags, flying side by side. Thousands of Japanese crowded in front of the entrance to the memorial, awaiting the president and Abe's arrival.

The announcement of the visit to Hiroshima reopened debates on the decision to attack Hiroshima and Nagasaki in the closing days of World War II.

As we've reported, the question of "apologizing" is fraught for Obama. During the 2012 presidential campaign, Obama was criticized by Republican candidate Mitt Romney for going on an "apology tour," traveling the world apologizing for American foreign policy.

The claim was denounced as untrue by multiple fact checkers, but the specter of that phrase has dogged Obama's foreign trips and statements on foreign policy decisions. Before the Hiroshima trip, the administration was particularly concerned about offending World War II veterans and their families, Scott Horsley reports.

President Obama did not offer an apology on this visit; Japan has said it did not seek one. Instead, leaders of both nations have described the visit as a chance to heal the wounds of the past and reaffirm a commitment to nuclear disarmament. 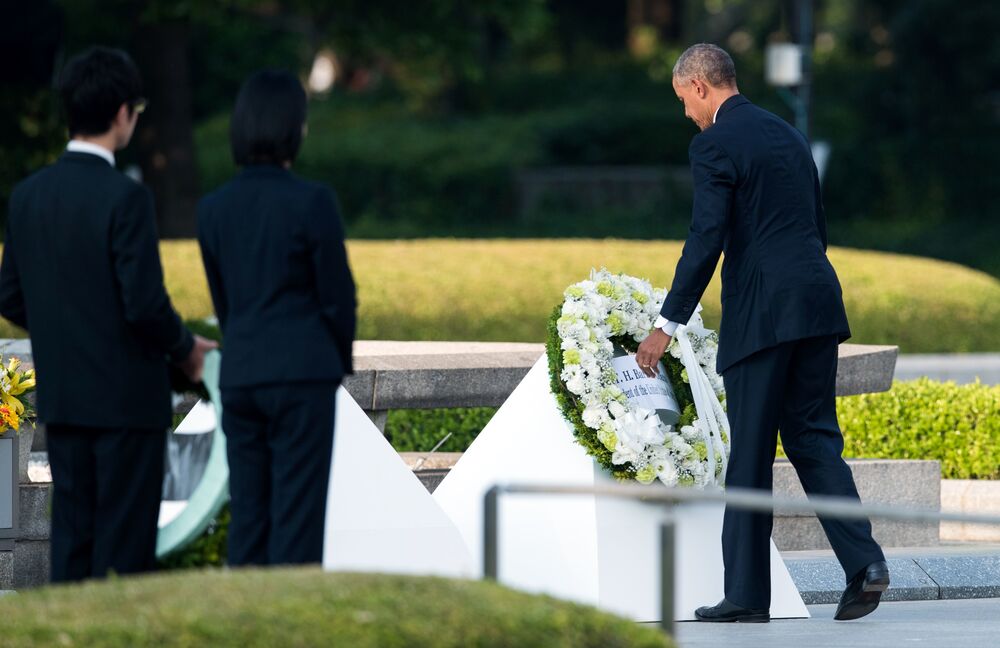 Obama lays a wreath at the Hiroshima Peace Memorial Park Cenotaph on Friday. Obama is the first sitting U.S. leader to visit the site that ushered in the age of nuclear conflict.

"Any more nuclear weapons is an inherently more dangerous world, more dangerous region," says Alexis Dudden, a history professor and Japan specialist at the University of Connecticut. "It's Obama's 'reality tour.' It's an acknowledgement at the highest level that the United States bombed a city, something that never happened before. The way to move all history forward is to acknowledge the truth of what has happened."

As NPR's Scott Horsley reported on Thursday, the atomic bombing of Hiroshima and Nagasaki is perceived very differently in the U.S. and Japan:

"Americans see the bombing as hastening the end of a costly and deadly war. A survey by the Pew Research Center last year found 56 percent of Americans approve of Truman's decision, while 34 percent disapprove. In Japan, nearly 8 out of 10 people see the bombings as unjustified.

"Japanese leaders have been accused of minimizing their own country's conduct during the war. Prime Minister Abe told reporters he has no immediate plans to visit Hawaii this year for the 75th anniversary of the Pearl Harbor attack. Abe noted that he did visit the World War II memorial in Washington last year and placed a wreath in honor of all those who died during the war."

Meanwhile, neighbors Korea and China, where many feel Japan hasn't properly atoned for its wartime atrocities, have been critical of the president's trip. China criticized Obama's decision to visit Hiroshima, calling it another opportunity for Japan to play victim rather than aggressor. Hundreds of thousands of Chinese civilians were killed in the Japanese Imperial Army's invasion and occupation of Manchuria; Korea was occupied by the Japanese from 1910 to 1945, and many of its women forced into sexual slavery, servicing the Japanese army at "comfort stations" near battlefields.

In his remarks, Obama looked forward in hope as frequently as he looked backward in mourning.

While he opened his remarks with death in the sky, he closed with a celebration of life.

"Today the children of this city will go through their day in peace," Obama said. "What a precious thing that is. It is worth protecting — and then extending to every child.

"That is a future we can choose."