Numbers Lie Even More Than Usual In Greenland

Numbers Lie Even More Than Usual In Greenland

Earlier this year, in response to a story about Greenland, an astute reader of this blog commented:

Charles Tudor • a month ago

"Goats and Soda? Greenland can hardly be thought of as a developing nation."

Charles Tudor is right. According to the World Bank, Greenland is definitively high income and has been since 1989. The average income per resident is about $33,000. (If you want to get really down and dirty with the income vs. development classifications, you can do that here.) And Goats and Soda is a blog about the developing world, where incomes are in the "low" or "middle" category. 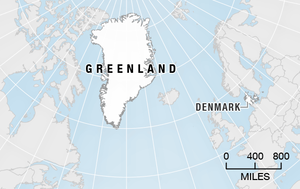 So why we did we cover Greenland in the past and why are we launching a new story on the country? It's because Greenland is at the intersection of the modern and traditional. Goats and Soda is a place for stories from a changing world, and few places have changed as much and as quickly as Greenland.

MORE ON GREENLAND: This story is part of our special report on Greenland, whose suicide rate is among the highest in the world.

Since World War II, Greenland has gone from isolated communities where people lived entirely off hunting, to a country with commercial fishing hubs and the beginnings of a large-scale mining industry. For Greenlanders living in bigger population centers like the capital, Nuuk, and a handful of other towns, the standard of living is similar to Europe's. But, when a country develops that quickly, a lot of people are left behind. Even though the country is high-income, at least one quarter of Greenlanders still live in tiny settlements and do not have access to basic services like adequate emergency health care and schools. But still, that comment got us thinking about some of the numbers we use to talk about income and development. Statistics like average per capita income, life expectancy and disease rates.

We like stats like these because they scoop up lots of information about everyone — in the U.S., about 319 million people — and help us zoom out to see how we're doing. In general, Americans are living longer, making more money, and getting fewer deadly infectious diseases than they were 50 years ago.

But what if your total population is very small? So small that all the people in your country would barely fill Dodger Stadium? What happens to generalities when the public isn't so general?

About 56,000 people live in Greenland, which makes it really difficult to make accurate forecasts.

"The size is problematic," Lars Pedersen, a population statistician for Statistics Greenland, the national agency that handles the country's statistics. Small numbers mean Pedersen can only forecast population trends three to five years out. "In the long distant future a lot can happen."

Or take disease rates. In Greenland disease rates can get really weird really fast. When, in 2010, Greenland had 116 cases of tuberculosis, that meant the country's rate of TB (200 per 100,000) was on par with Haiti. Three years later, the rate in Greenland had fallen to just 60 per 100,000, a major decrease that was the result of treating fewer than 100 people with TB.

Another mind-bending effect of such a small population is that each variable makes a big difference. Take life expectancy:

Those numbers are surprisingly low for a high income country. In Denmark, which still partially controls Greenland, men live about a decade longer.

Obviously how long people live has to do with a lot of factors. So many, in fact, that it's usually difficult to pinpoint any one cause of death that moves the needle too much. But in Greenland in 2013, the last year for which there are detailed numbers available, 25 people under 30 killed themselves. Most of them were men and boys. In addition to being a tragedy, those deaths noticeably drove down Greenlandic life expectancy.

"We lose a lot of years when a young person commits suicide," explains Henrik Trykker, Chief Medical Officer for Greenland's National Health Board. "Statistically, it takes a lot of years off the average."

Put another way, if Greenland could prevent just two dozen people from killing themselves, the average life expectancy for the whole country, or at least for men, would rise noticeably.

There is an upside to gathering data about a small society. The numbers might be less useful, but they're more personal. The numbers are much closer to the individual lives they represent.

According to the latest published statistics, there are four beehives in Greenland. There are 36 Americans. There are three motorcycles. If you wanted to, you could go find them all and count them yourself.

In 2013, the Greenlandic government calculated that 219 people started college (which was a pretty simple statistic to chase down, since college is paid for by the government). Of those, 72 graduated. Twenty-seven got degrees in the humanities, four in natural sciences, and one of them studied architecture.

One! That one young architect is a Greenlandic national statistic. When I see that number, I want to congratulate her, celebrate with her family and find out why she chose architecture. In a strange way, even though the numbers tell us less about the collective society, they seem to represent more about the people who live there.

With Focus On Redistricting, Democrats Place New Emphasis On Statehouses

Coronavirus Cases Are Surging. The Contact Tracing Workforce Is Not

'All Bark And No Bite': Trump Holds Prescription Drug-Pricing Order In Search Of Deal

Ending 'Asylum As We Know It': Using Pandemic To Expel Migrants, Children At Border