#NationalPoetryMonth: Verses That Celebrate Life On The Farm

#NationalPoetryMonth: Verses That Celebrate Life On The Farm

Every writer knows the paralyzing terror of the blank page. For poet Tess Taylor, the antidote to fear came through farming.

Taylor is the author of Work & Days, a new volume of poetry inspired by her year spent working on a farm in the Berkshires in western Massachusetts. She was there living alone in a cabin as part of a writer's residency, finishing her first book of verse, and "had nothing to do but write," she says. "The idea of facing the blank page for that much time really scared me."

So Taylor, who grew up in Berkeley, Calif., and had long volunteered at community gardens, turned to the land for solace. She began working one to two days a week at Farm Girl Farm, a small, three-acre outfit that provides food for 80 local families and two restaurants. The work was grounding, literally and figuratively. Days spent laying mulch or planting leeks by hand, row by row, provided time "to get out of my head," she says.

"I got conscious of the fragility of farming," Taylor tells me, and "what it means for people who are making a basic gamble that they will put seeds in the ground and they are going to make food that will be their livelihood and feed us."

"I got very much into the present tense, and into the rhythm of days, in a way that felt ancient and timeless," she says. Poets, she notes, have been writing about life on the farm since at least around 700 B.C., when the ancient Greek poet Hesiod was musing about issues like caring for cows and bees — which, she notes, "is a very present question."

"Food—'cultivation'— is the most basic part of 'culture,' the art of stability, the art of civilization," she says.

The resulting book is a lyrical meditation on food and farming and what Taylor calls "this fragile and ultimately, necessary relationship we have with the earth."

And in an era when distraction endlessly beckons from tiny screens in the palms of our hands, she says farming can help reconnect us to the world: "This act of being in relationship and awareness of what's feeding you — to the food, to the weather, to time, to your body — these are themselves radical acts."

To celebrate National Poetry Month, we've republished two of Taylor's poems from Work & Days, with our own illustrations. (Want these on your wall? Download "Equinox" and "May Day.") Do you have a favorite poem or verse dealing with food or farming? Tell us below or on Twitter @NPRFood. 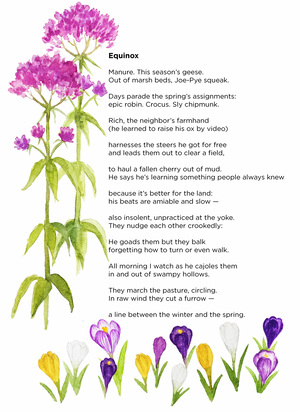 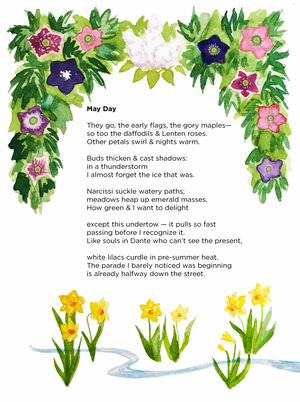 Djokovic arrives in Serbia after deportation from Australia