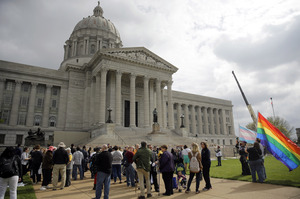 LGBT-rights supporters take part in a rally outside the Capitol in Jefferson City, Mo., on March 31. An amendment to the state Constitution protecting people who object to same-sex marriage failed in a committee vote on Wednesday, effectively killing the bill.

Missouri's so-called religious freedom bill may be dead for this year. The amendment to the state Constitution would have protected people who didn't want to provide services related to same-sex marriages, including clerks, clergy and businesses.

The bill, which had drawn criticism from LGBT-rights advocates and the business community, could technically be revived. But Marshall Griffin of St. Louis Public Radio says that is very unlikely this year, given that a lawmaker who voted "no" would have to be part of pushing the legislation forward again.

The bill has been so controversial, in part, because it specifically is aimed at protecting people who believe "marriage is or should be recognized as the union of one man and one woman," rather broadly protecting religious freedom for all, as The Two-Way has explained. In addition, the bill guarantees that the state wouldn't punish someone for actions taken with certain beliefs in mind.

Before the Senate passed the legislation last month, Democrats filibustered for more than 36 hours, as The Two-Way reported. Senate Democrat Jason Holsman, among those who started the filibuster, said:

Wednesday, Democratic House Minority Leader Jacob Hummel said the committee vote "will be remembered as being on the right side of history," according to the St. Louis Post-Dispatch.

On the conservative side, the Missouri Alliance for Freedom called the defeat "the opening salvo in a long war," in a statement posted online. "We are not finished. While today's results are not optimal we are not going anywhere. Religious freedom is not negotiable."