Minimum And Overall Wages Are Rising, Luring Workers Back

Minimum And Overall Wages Are Rising, Luring Workers Back

For workers who want a raise, this was an encouraging week, with minimum-wage legislation gaining momentum and employers paying more across the board.

In fact, the Service Employees International Union labeled this "a historic week." Here's what happened on the wage front in recent days:

The Labor Department said Friday that last month, employers created 215,000 jobs and raised average hourly earnings by seven cents, to $25.43. That might not sound like much of a raise, but compared with one year ago, wages are up 2.3 percent.

Those bigger paychecks are helping workers at a time when consumer prices are up only 1 percent from a year ago. Family budgets are in better shape when gasoline is cheaper and wages are higher. 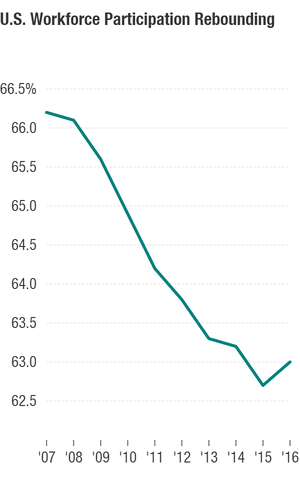 Even a small wage uptick might be helping lure "discouraged" workers back into the labor force. In recent years, the percentage of people who count themselves as workers — whether employed or just seeking positions — has been shrinking.

Many economists have attributed that decline to frustration with low pay. To make jobs worth the effort, paychecks have to be big enough to allow workers to cover their costs, such as transportation, child care, uniforms and such. When the Great Recession pushed down wages and killed off job openings, millions of Americans decided not to even look for work.

Now the Labor Department says the workforce participation rate rose in March to 63 percent, the highest level since March 2014. The rate has been rising consistently from its lowest point of 62.4 percent in September 2015. It's still low by historic standards, but economists applauded the uptick.

"This is a vote of confidence on the part of workers regarding the health of the U.S. economy," IHS Chief Economist Nariman Behravesh said in his analysis of the jobs report.

HSBC Global Research said the labor force gains appeared "across nearly all age groups and for both men and women."

In all, an additional 396,000 people declared themselves to be in the workforce. That surge of job seekers sent the unemployment rate up 0.1 percentage point, to 5 percent, last month.

So we know from the March jobs report that more people are getting raises and more are feeling encouraged. But what's "historic" about that?

Labor leaders are so thrilled because of two big wins in their fight to raise minimum wages.

This week, California's Legislature approved a plan to raise the state's minimum wage to $15 an hour over the next six years. Gov. Jerry Brown is expected to sign the measure, which would increase the minimum from the current $10. California would become the first to implement a $15 minimum wage statewide.

And in New York, Gov. Andrew Cuomo and top lawmakers reached a budget deal Thursday that would raise the hourly minimum wage in New York City to $15, from the current $9, by the end of 2018. Other parts of the state would see smaller increases.

Between New York and California, more than 9 million workers would see their pay ratchet up to $15 per hour, and 18 percent of the U.S. workforce would be covered by a $15 minimum wage, according to the National Employment Law Project, which advocates on issues affecting low-wage workers.

"There has never been a week in U.S. history when more workers in more places have won a common demand," SEIU President Mary Kay Henry said in a statement.

The Labor Department report showed big gains in the sectors that tend to hire lower-wage workers. For example, retailers added 48,000 jobs in March, and food service and drinking places added 25,000.

But of course, not all of the news was good. Manufacturing jobs fell by a lot in March, down 29,000 for the biggest monthly drop since December 2009. The mining sector was hit hard, too, losing 12,000 jobs.