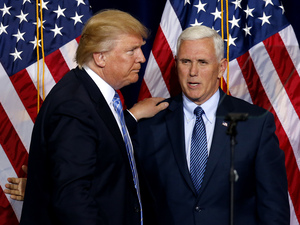 Indiana Gov. Mike Pence, the Republican candidate for vice president, did something his running mate, Donald Trump, declines to do. He released his tax returns dating back 10 years.

Gov. Pence and his wife, Karen, donated about 8 percent of their incomes to charity. Their effective state and federal tax rate ranged from a high of 16.4 percent in 2014 to a low of 10.39 per cent a year earlier.

In his financial disclosure form here, Pence lists his main asset as his defined benefit pension from the state of Indiana, valued at between $500,000 and $1,000,000. Details of his tax returns are available here.

In a news release, Pence's spokesman Marc Lotter contrasted the governor's tax returns with those of Bill and Hillary Clinton.

"These tax returns clearly show that Mike and Karen Pence have paid their taxes, supported worthy causes, and, unlike the Clintons, the Pences have not profited from their years in public service," said Lotter.

But the disclosure by Pence is likely to raise more questions about his running mate, Donald Trump, and whether he will ever make his tax returns public. Trump has defied a 40-year tradition of presidential candidates showing the public how much they earned and how much state and federal taxes they paid. Apparently, Trump intends to hold fast to his refusal to release his returns.

In his statement, Lotter said this about the Pence returns: "These returns are being released with the full support of Mr. Trump who plans to release his tax returns upon completion of a routine audit."