At Macedonian Border, Tensions Between Migrants And Police Erupt Into Violence

At Macedonian Border, Tensions Between Migrants And Police Erupt Into Violence

After a violent day at the border between Greece and Macedonia, as rain fell on camps filled with tens of thousands of migrants, an uneasy tension permeated both sides of the barbed-wire fence. And two things were in abundance: confusion and criticism.

Migrants and refugees stranded at a Greek camp on the closed border stormed a fence on Sunday and were repulsed by Macedonian police.

Greece denounced Macedonia's use of tear gas and rubber bullets against refugees and migrants — but also pointed fingers at migrants themselves for spreading rumors that they could continue on into Europe if they got into Macedonia.

Macedonia asked Greek police forces — who news reports said stood back and watched the confrontation — to intervene and stop any future migrant rioting. 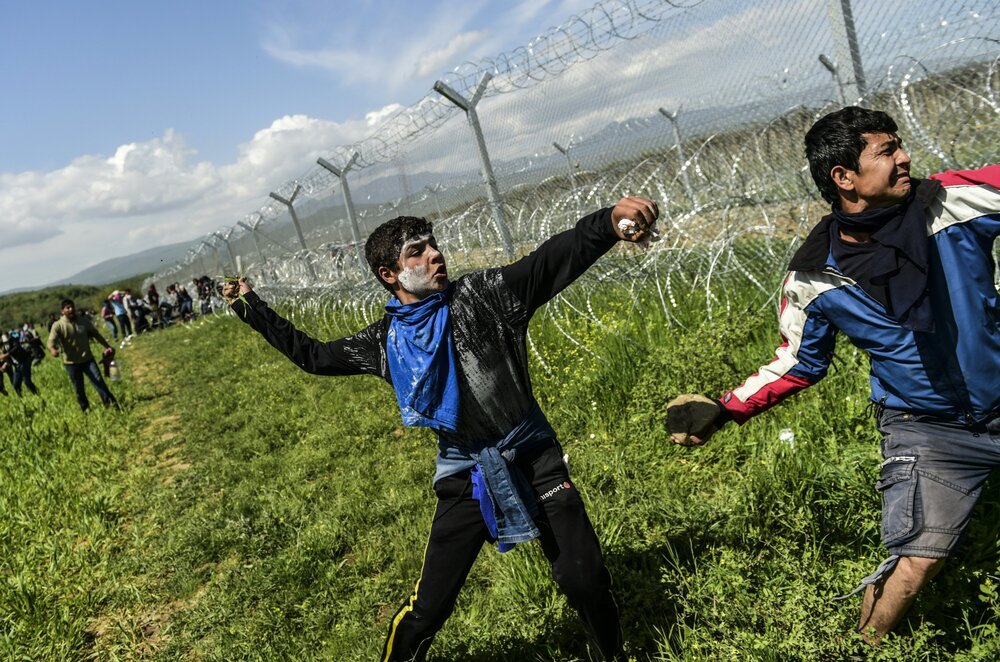 Refugees and migrants clash with Macedonian soldiers as they storm the border fence near Idomeni on Sunday.

And the U.N. High Commissioner for Refugees issued a statement highlighting the hopelessness and despair at the migrant camps and summing up the situation like this:

A Push By Migrants

The violence began near the border town of Idomeni, as migrants pushed multiple times to scale a border fence and cross into Macedonia, The Associated Press reports.

More than 11,000 migrants are housed in makeshift camps in Idomeni; they hope to cross into the Former Yugoslav Republic of Macedonia and travel through the Balkans into Europe.

But Macedonia, which instituted strict border controls months ago, shut down the border completely in February — leaving thousands of migrants stranded there.

Greece has offered to house the migrants elsewhere, but the AP reports that many of the residents of the camps are reluctant to move away from the border. Some camp residents seemed "unaware that European Union governments support Macedonia's decision" to bar migrants from entering, the wire service writes.

The AP described the initial charge on the fence Sunday:

"The clashes began soon after an estimated 500 people gathered at the fence. Many said they were responding to Arabic language fliers distributed Saturday in the camp urging people to attempt to breach the fence Sunday morning and 'go to Macedonia on foot.'

"A five-member migrant delegation approached Macedonian police to ask whether the border was about to open. When Macedonian police replied that this wasn't happening, more than 100, including several children, tried to scale the fence."

Joanna Kakissis reports for NPR that a few of the migrants threw rocks at police. "Some tore a hole in the fence and ran through but were arrested," she says.

A Counterattack By Macedonia 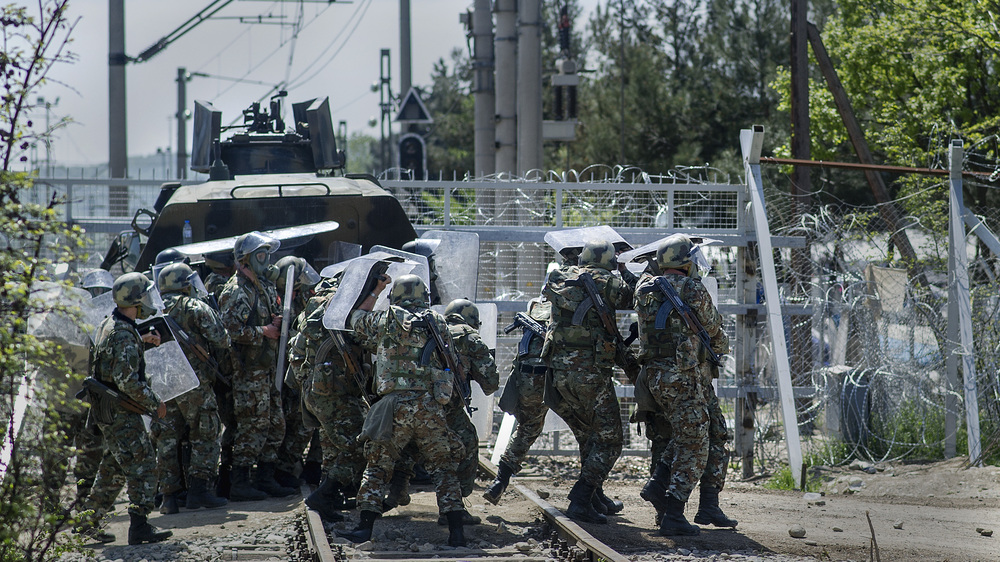 Macedonian police react as migrants and refugees throw stones during clashes at the border Sunday.

Women and children fled the camp into farm fields to run away from the tear gas, according to the AP, while Greek police "observed from their side of the frontier but did not intervene" as the violence went on.

Doctors Without Borders said Sunday that medical teams treated 300 people after the violence, including 10 who said they were beaten by police, 40 who were injured by rubber bullets and 200 who had breathing difficulties after being tear gassed. The aid group says it treated dozens of children and at least one pregnant woman.

The AP writes that rain began to fall in the evening, and observers hoped the weather would cool the day's hostilities. 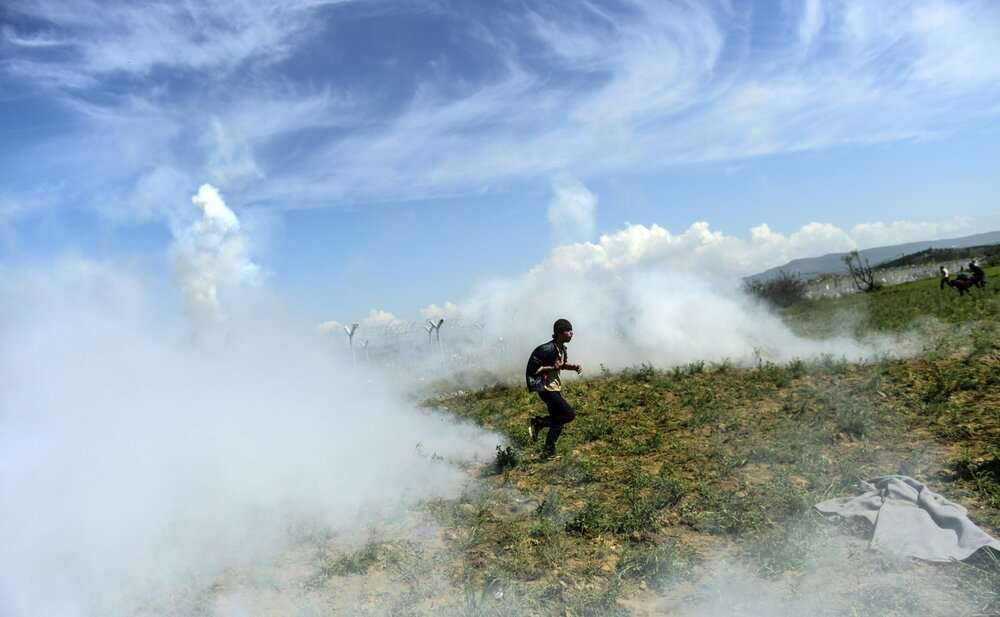 On Sunday, refugees and migrants attempted to storm the border fence between Greece and Macedonia. They were met with tear gas, stun grenades, rubber bullets and water cannons.

But this is not the first eruption of violence at the border fence in Macedonia, and there's no sign that the conflict has altered the tense situation.

Macedonia is now asking Greece to use its police forces "to prevent migrants from rioting and trying to cross the border illegally," Peter reports.

Greece, meanwhile, criticizes what it calls "indiscriminate use of chemicals, plastic bullets and stun grenades against vulnerable people," the AP writes, while a state spokesman also said rumor-spreading occupants in the camps also bore some responsibility. 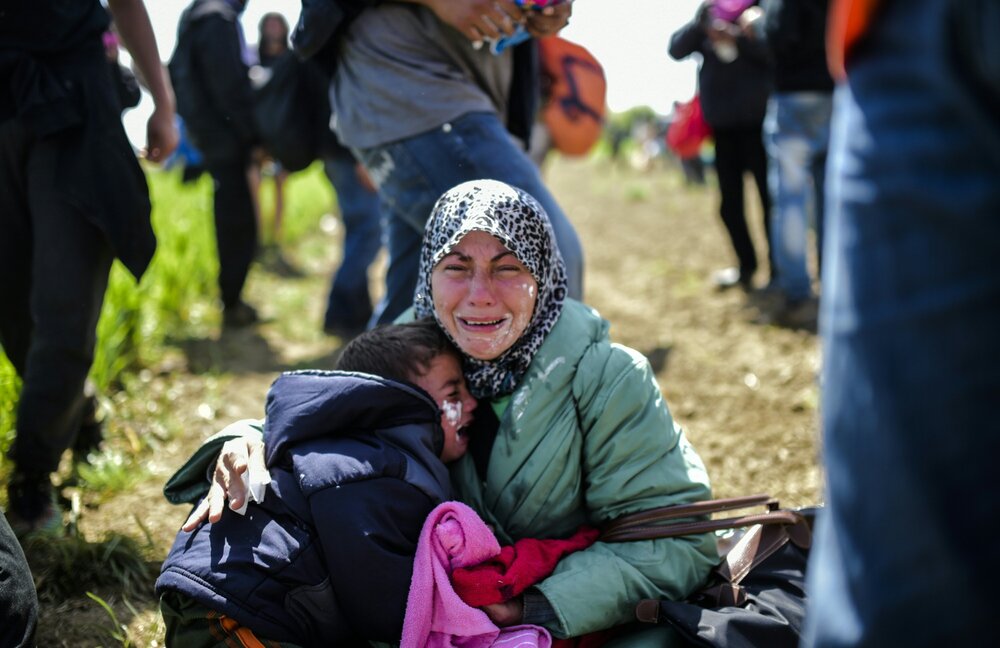 A woman and her children cry after being affected by tear gas near Idomeni on Sunday. Hundreds of people were hurt when police fired tear gas on a group of migrants as they tried to break through a fence on the Greece-Macedonia border, Doctors Without Borders said.

Doctors Without Borders criticized European policies that left migrants stranded and forced Greece to confront a larger crisis than it had the means to deal with. As the AP notes:

"Greece remains committed to enforcing the EU-Turkey agreement that requires most migrants currently in Greece to be deported back to Turkey. Besides Idomeni, Greece is trying to clear makeshift camps by the end of April at three other locations containing a total of more than 10,000 people: a gas station 17 kilometers (11 miles) south of Idomeni, the port of Piraeus, and the site of Athens' defunct former airport.

"The planned deportation of 6,750 migrants on Greek islands back to nearby Turkey has been suspended because Greek officials, too few in number, have been overwhelmed by the volume of asylum applications."

"This absurd humanitarian crisis created by European states' policies is becoming more unbearable by the day," Jose Hulsenbek, the Doctors Without Borders head of mission in Greece, said in a statement. 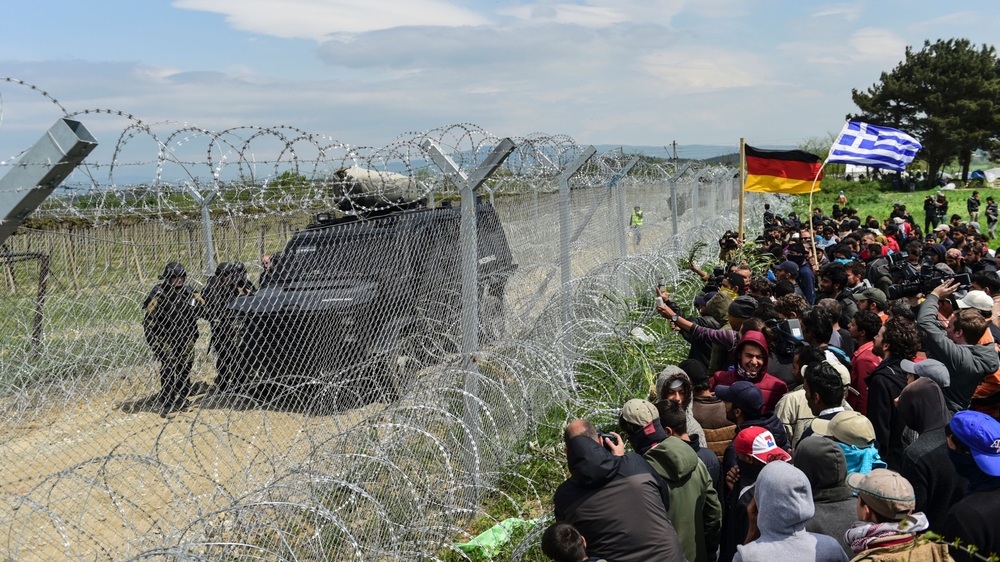 Refugees and migrants bearing Greek and German flags face Macedonian soldiers at the border fence as they protest on Monday, a day after violence broke out at the border.

The UNHCR emphasized that the violence benefited no one.

"Time and again in recent months we have seen tension unfolding at various European borders, between security forces on the one hand and people fleeing war and in need of help on the other. People get hurt and property is damaged. Harm is done to perceptions of refugees and to Europe's image alike," the U.N. refugee agency said.

Hope At War With Hopelessness

All told, some 50,000 migrants are stranded at the border between Greece and Macedonia, Peter reports.

"Dismal conditions" at Idomeni are fueling "hopelessness and despair," the UNHCR says.

But the AP spoke to migrants at the border who said that while the camp was grim, they hadn't given up the dream of Europe:

"Abd Ahmad, 27, an Iraqi Kurd who is traveling with his wife and their 1-year-old daughter, said life in the Idomeni camp was 'difficult for the child' — but not nearly as dangerous as conditions back home. He said Islamic State militants killed a 7-year-old sister and 11-year-old brother in Iraq, while another brother already had reached Germany and another sister was in Finland. He remained hopeful that eventually, Macedonian authorities would relent and allow them through."