Nurse practitioner Kim Hamm talks in soothing tones to her 14-year-old patient as she inserts a form of long-acting contraception beneath the skin of the girl's upper arm.

"This is the numbing medicine, so you're going to feel me touch you here," she says, taking the teen's arm. "Little stick, one, two three, ouch. And then a little bit of burn."

Hamm works at the Gaston County Teen Wellness Center, in Gastonia, N.C., which provides counseling, education and medical care. The teenager has already talked through her birth control options with another health care provider and chosen the implant — a flexible rod, about the size of a matchstick, that slowly releases low levels of hormones to prevent pregnancy.

"You're going to feel tons of pressure here," Hamm says, using a small device to insert the implant. "That's it!"

And, in terms of preventing pregnancy, that will be it for the teen for the next several years.

Long-acting reversible contraception methods — including implant rods and intrauterine devices, or IUDs — are safe forms of birth control, and 99 percent effective, say specialists in reproductive medicine.They are endorsed by the American Academy of Pediatrics and the American Congress of Obstetricians and Gynecologists as a good line of defense against teen pregnancy.

But in the U.S., these long-acting, reversible devices are still not as frequently used by young women as elsewhere. They can be expensive, and problems with older versions of the devices — issues that have since been resolved — hurt their reputation. Only about 10 percent of American women use the devices, says Megan Kavanaugh a senior research scientist at the Guttmacher Institute, which studies reproductive issues.

"Some of the other developed countries that we look at are in the high teens, maybe low 20s in terms of percentage of use," she says.

Kavanaugh says better provider training and patient education should lead to higher usage of the long-term devices in the United States.

That's exactly what is happening in Gaston County, N.C., where clinics have seen usage rates climb to nearly 30 percent among teens. Since 2009, all providers in Gaston County clinics have been trained to insert the devices. The county uses federal funding to help cover the cost for the uninsured, which can be roughly $1,000 for an IUD.

"While we are not claiming full responsibility for all the decreases in these public health indicators, we do believe that our LARC investment made a huge impact on those," Camp says.

Recently, the federal Department of Health and Human Services has started encouraging all states to make the methods more accessible through Medicaid, government insurance that covers many low-income women. The government is asking doctors to talk to their patients about long-acting, reversible contraception and allowing higher reimbursement rates for the devices.

By using effective contraception to space out their children, teens and other young women can help reduce the risk of delivering a premature or low-birth-weight baby, research shows. And preventing unplanned pregnancies can be "essential to a woman's long-term physical and emotional well-being," according to HHS.

There are versions of the implants that can be left in place to prevent pregnancy for five or 10 years at a stretch. But women can also choose to get them removed whenever they want, and restore their fertility. Kie'Ja Phillips is from Gastonia and 19-years-old. She had the three-year implant in her arm before heading to college last year.

"I do not want to have children until I'm done getting my education," she says. "I want to be able to provide for my children and give them a stable household — financially and emotionally and physically."

Phillips also teaches her friends and other teens about their options. She says a lot of them know about the contraceptive pill, but very few about IUDs or implants.

Last year, nearly 30 percent of teens who got contraception at the Gaston County clinics chose the long-acting kind.

"We feel very strongly that this is making a huge impact here," Dr. Taormina says.

Medicaid in the state next-door — South Carolina — has also seen an increase in the use of these long-acting, reversible contraceptives. In 2012, the state implemented a new way of paying hospitals so medical providers could offer and insert long-acting, reversible contraception right after a woman gives birth, which the nation's leading obstetrician's group says can be a "particularly favorable time." 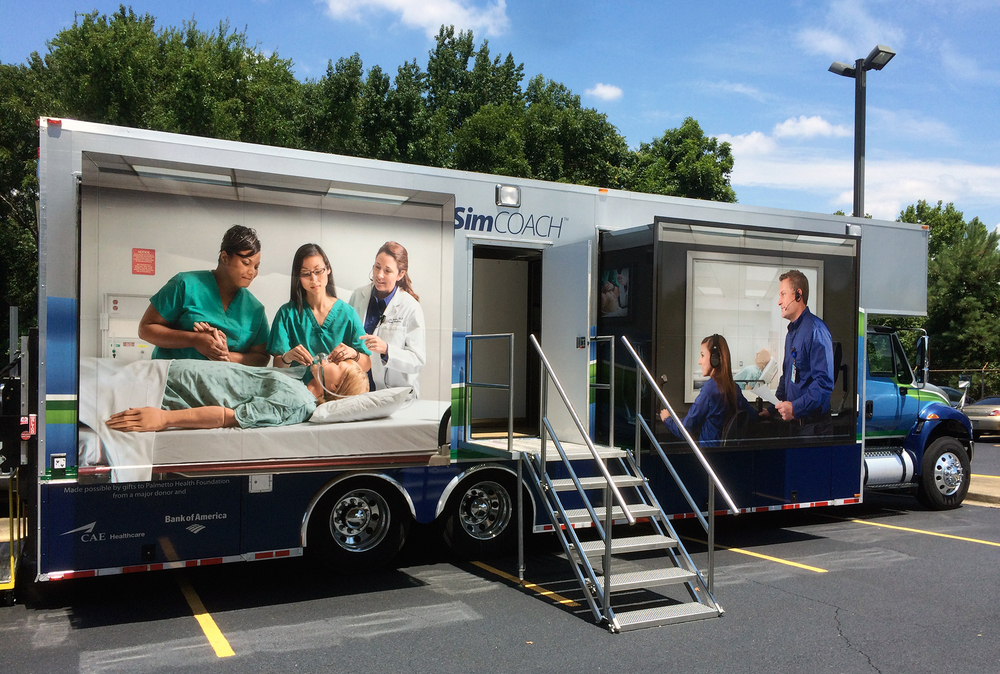 The University of South Carolina School of Medicine takes this SimCOACH — outfitted with two simulated hospital delivery rooms — throughout the state to train health care providers in a variety of procedures. Among the topics: the insertion and removal of contraceptive implants and IUDs.

Staff with the Palmetto Health-USC School of Medicine in Columbia demonstrated the procedure to health care providers recently in its SimCOACH, which is basically a truck outfitted, for training purposes, with two hospital rooms and high-tech mannequins that can simulate a variety of birth outcomes. Palmetto Health drives the coach around the state to teach hospital staff about a variety of procedures and topics, including contraception.

"The IUD is inserted 10 minutes after delivery of the placenta when a patient has had a vaginal delivery," Dr. Judy Burgis says.

B.Z. Giese is director of the South Carolina Birth Outcomes Initiative, a project within the state's department of health and human services. Giese says the choice to have an IUD or implant inserted is always completely up to the woman, and only after she's consulted with a health care provider. But the reason obstetricians within her program started offering it immediately after birth is simple: About half of women on Medicaid who gave birth weren't showing up to their postpartum visit.

"We were missing a lot of moms who did not come back," Giese says. "And, actually, the next time the doctor saw them, they came back pregnant with another child."

Ana Walker, an 18-year-old in Columbia, S.C., chose to have an implant that lasts three years inserted in her arm. Walker got the implant after giving birth to her daughter Bella. She says she likes that she won't have to remember to take a pill every day.

"Right when I heard about it, I went for it," she says.

Breanna Martin, who is 20 and also lives in Columbia, recently chose an IUD after she had her baby. Martin says the device puts her in control of her fertility.

"That's the wonderful thing about it," she says. "If I want to wait five years, I'm protected for five years. And if I want to have kids sooner, then I can get it taken out."

Giese calls getting the device after childbirth a win-win for the baby and the mom. "It is a cost savings," she says. "It is a convenience for the mom. The satisfaction rate of the moms that we know leaving the hospital is extremely high."

Now, she says, at some hospitals in South Carolina, around a third of new mothers leave with an IUD or implant in place. That number, Giese says, was basically zero just a few years back.

This story is part of NPR's reporting partnership with WFAE and Kaiser Health News.