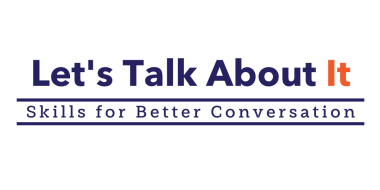 Being a persuasive dialogue partner requires a major shift away from our usual mindset of "Let me tell you why you’re wrong and I’m right." Today on Let's Talk About It, dialogue coach David Campt shares his roadmap with WFDD’s David Ford for getting into a more productive mind space as we enter potentially fraught conversations.

On the importance of candor:

If we're going to be effective in creating moments of dialogue, much less persuading people, it's important that we have candor, where we tell our own stories, including perhaps stories that don't make us look too good. Especially if we're talking about social problems. And when we want to tell somebody that they're a part of that social problem, we want to be able to tell a story about how we are sometimes a part of that social problem. If I'm telling somebody that they're racist, or homophobic, or they're ableist, or whatever, what's important is that I talk about how I have sometimes been like that. Because we have a whole different encounter if we're talking about a social problem that they might be a part of a lot, and I'm a part of a little, as opposed to, "You’re the problem, and I'm innocent." So, that candor is critical.

On ABC (Agreements Before Challenges):

Oftentimes people want to just correct people and tell them they're wrong instead of thinking, "In order for me to maximize my influence, and to also maximize this relationship, I need to focus on us feeling the connection." You want to agree with somebody before you challenge them — the ABC rule — agreements before challenges. And that's about creating a sense of connection, as opposed to one where you're on the top, they're on the bottom, they're wrong. And they're just receiving your dispensed wisdom. That rarely works, either for fostering a sense of connection or even persuasion.

If you want to approach this conversation and have a shot at fostering a sense of connection, much less influence, it is important to take a moment to stop and calm yourself down. And we talked in previous episodes about strategies to help you do that. So, that's reflect.

Ask. What you want to do is to go beyond the person's mere opinion, to the experience behind their opinion so that you know why they came to that conclusion.

Connect. The point is to find something you can agree about, even if it's not the heart of the matter. But if they tell you a story — and do ask for that — you want to come back and tell them a story that shows, "I don't think you’re completely crazy."

And then finally, after all of that, then you try to expand their thinking, but also through a story where you get to tell them an experience that helps them see why you came to your conclusion, just like you've asked them for a story about how they came to their conclusion. And the good news is that by sequencing the conversation like this, you exercise something that's called the reciprocity principle — which many mammals know — which is if somebody does something nice to you, there's a part of us that knows we should do something [of a similar] magnitude nice for them.

Let's Talk About It: Wading into the woke debate

Let's Talk About It: forging connections