The judge in the federal trial of seven people who occupied the Malheur National Wildlife Refuge in Oregon has ordered one juror to be replaced — a day after the jury's ability to reach a verdict came into question.

On Tuesday, Oregon Public Broadcasting reports, jurors sent a note to U.S. District Court Judge Anna Brown asking whether they needed to agree on a decision concerning all seven defendants.

"If we are able to agree on a verdict for three of the defendants; but are at a stand-off for the others, does our decision for the three stand? Or does this become a mistrial for all the defendants?" the jurors wrote.

In a separate note to Brown, one juror expressed concern that another juror's previous work for the Bureau of Land Management could make him biased.

Juror No. 11 had revealed his work with the BLM during jury selection proceedings, and said he did not think it would prevent him from being impartial. On Wednesday, Brown dismissed him from the case, reports Conrad Wilson of Oregon Public Broadcasting. Deliberations are set to resume on Thursday with an alternate juror.

The ownership and management of federal lands by the Bureau of Land Management is central to the reasons Ammon Bundy gave when he and others began their 41-day, armed occupation of the Malheur National Wildlife Refuge.

But during the roughly six-week-long trial, federal prosecutors did not focus on the subject of ownership of federal lands, arguing simply that the occupiers conspired to impede federal workers from doing their jobs.

Outside the court Tuesday in downtown Portland, a growing crowd of militia sympathizers waited anxiously for a verdict.

The protesters, dressed in traditional Western ranching attire, waving U.S. flags and at one point even riding a horse nicknamed "Lady Liberty" up and down the sidewalk, were a stark contrast in otherwise liberal downtown Portland.

But they seemed to enjoy the attention and were eager to talk to passersby of all political persuasions.

"We're here to support the political prisoners who have been in jail way too long for no apparent reason," said David Zion-Brugger of Redmond, Ore. 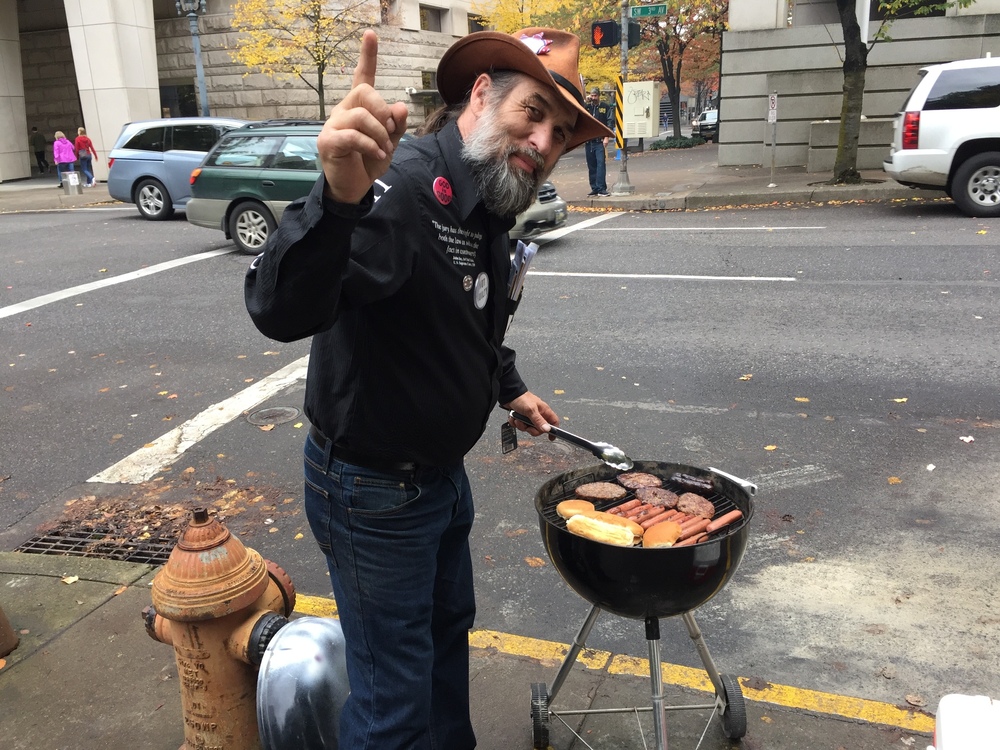 David Zion-Brugger grills hot dogs and hamburgers to pass the time while waiting for a verdict on Tuesday.

To pass the time, Zion-Brugger grilled hamburgers and hot dogs on a portable barbecue set up on the sidewalk, passing out free food to fellow protesters and other curious onlookers, including several homeless people gathered in a small park.

Zion-Brugger said he first arrived in Portland for the start of the trial on Sept. 7 and has been out here most days since. Whatever the verdict, he said he's not worried about the fate of Ammon and brother Ryan Bundy and their followers inside the jail across the street.

"They've got God with them, and they know where they're going from here," Zion-Brugger said.

Bundy sympathizer John Lamb of Bozeman, Mont., also has been stationed outside the courthouse throughout the trial in a protest of what he calls an overreaching federal government.

"Whether it's a guilty verdict or not, we still have to fight for land rights and for freedom," Lamb said.

Lamb is also planning to head to Nevada early next year where the Bundys' father, Cliven Bundy, who inspired the Oregon occupation, is set to stand trial over an armed standoff against the federal Bureau of Land Management outside his ranch east of Las Vegas in 2014. 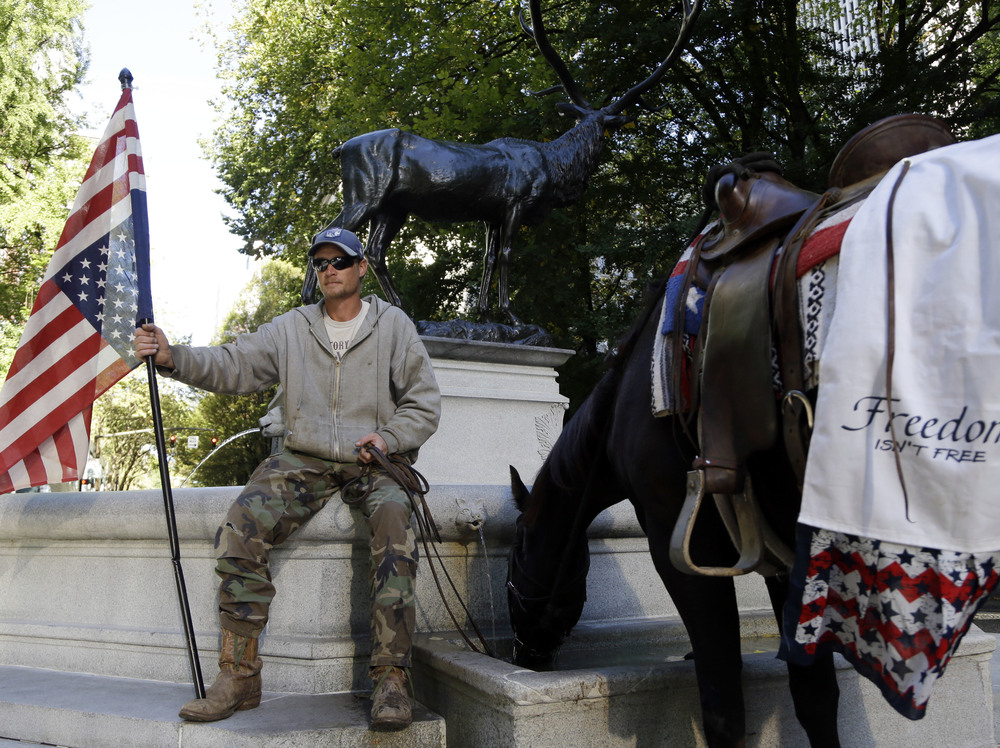 A protester, who would not identify himself, sits outside the federal courthouse in Portland as his horse, Lady Liberty, gets a drink from a fountain.

"Especially if Hillary Clinton is elected, all of our rights will be taken away," Lamb said.

The Bundy supporters weren't the only ones outside the courthouse awaiting a verdict. Across the street, Jarvis Kennedy, a councilman with the Burns Paiute Tribe, gazed out on the protesters, chuckling and rolling his eyes.

"They're kind of loony," he said. "I think they just need to follow somebody and [so] they follow Bundy."

Since the trial began, Kennedy has been making the six-hour drive back and forth between Portland and Burns, Ore., where he lives. He says his hometown is eager for closure and to move on.

As we've reported, "more than two-dozen people were indicted on conspiracy charges in connection with the case. Many have pleaded guilty, while several others are set to go on trial in February. Charges against one man — Peter Santilli, who broadcast live from the occupation — were dropped."

The federal government is offering another round of free COVID tests

Ukraine says it's downed 200 aircraft, a mark of Russian failures in the sky