Reno spent her final days at home in Miami surrounded by family and friends, D'Alemberte told The Associated Press. She was 78.

Reno served longer in the job than anyone had in 150 years. And her tenure was marked by tragedy and controversy. But she left office widely respected for her independence and accomplishments.

She was not President Bill Clinton's first choice to head the Justice Department, nor his second. But after his No. 1 pick went down in confirmation flames, and his second choice also proved controversial, Clinton finally turned to Reno.

She was an unexpected pick. She had no connections to Clinton or Washington. But Clinton wanted a woman, and Reno was a big-time prosecutor, holding the top prosecutor's job in Miami-Dade County, a position she had been elected to four times over 15 years.

Jamie Gorelick, who would later become deputy attorney general, was assigned to prep Reno for her confirmation hearing. "She was the least air-brushed candidate we have ever had for a Cabinet-level position," says Gorelick. "She was herself, and she didn't change herself for Washington."

Reno arrived at the Justice Department knowing no one, and was immediately plunged into the siege at the Branch Davidian compound outside Waco, Texas. Four federal agents had been killed and 16 wounded while serving a warrant to search for illegal guns. Seven weeks into the siege, pressed by the FBI, Reno authorized a raid on the compound, resulting in 76 deaths, including as many as 25 children and the Davidian leader David Koresh, who ordered his followers to set fire to the compound.

In two sets of Waco congressional hearings over the next two years, Reno would successfully quell critics on the right and left.

"What haunted me," Reno explained at one hearing, "was that if I did not go in, I might be sitting there 10 days [later] ... when [Koresh] came out with explosives, blew himself, some agents and the entire place up."

Years later, however, in an interview with NPR shortly before leaving office, her regret was palpable. "We'll never know whether it was a mistake or not, in one sense," Reno admitted. "But knowing what I do, I would not do it again. I would try to figure another way."

"Waco didn't make her hesitant: It made her insistent about getting her own information," observes Walter Dellinger, who served in two top Justice Department jobs under Reno.

Dellinger believes, for instance, that it may have been the Waco experience that led Reno to go personally to Miami in April 2000 to see if there was a way to avoid a forcible removal of 6-year-old Cuban refugee Elián González from the home of a great-uncle so the boy could be returned to his only living parent, in Cuba.

Elián had been rescued at sea after his mother and eight others drowned trying to get to the United States. Rescued by fishermen and brought to the U.S., he was soon turned over to his great-uncle. The Cuban community in Miami was in an uproar over the idea of returning the boy to his father, who lived in Cuba, and the furor soon bled over to Congress.

But when negotiations with the great-uncle failed, armed federal agents, acting on Reno's orders, raided the home, removed Elián, and turned him over to his father, who had come to the U.S. to receive his son. When the U.S. Supreme Court refused to intervene, the two returned to their home in Cuba. 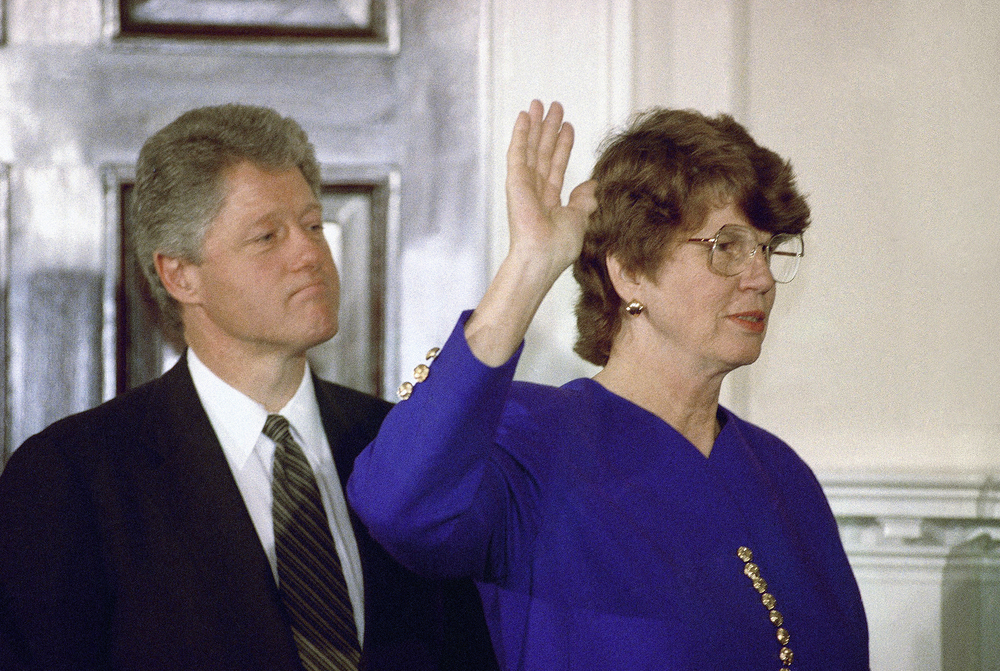 Janet Reno takes the oath as attorney general during a ceremony at the White House on March 12, 1993, while President Bill Clinton watches.

Over the course of time, Reno would become embroiled in many controversies. She sought the appointment of a series of independent counsels to investigate four fellow Cabinet members and President Clinton himself. But she refused to authorize an independent counsel investigation of contributions to the Clinton-Gore campaign after Justice Department lawyers concluded no crime had been committed by either the president or vice president.

The decision so infuriated Republicans that some called for her impeachment. "This is the most politicized Justice Department in the history of the United States," railed Dan Burton, the Republican chairman of a key House oversight committee.

At 6 feet 2 inches, however, Reno stood tall in the political crosswinds. Gorelick observes that when members of Congress, like Burton, were unhappy with a government official, they threatened to call that official to testify. But Reno, who had served as a staffer in the Florida state Legislature, always said, "Fine, I'll be there."

As a result, says Gorelick, "eventually all those who were threatening her with a hearing stopped doing that, because she prevailed in every outing that I can recall — she just went in there and laid out her views and bested those who would challenge her."

The controversies that the Justice Department faced during Reno's reign often eclipsed the many things that went well: the quick apprehension and successful prosecution of the Oklahoma City bombers, for example; the pursuit of bombers of women's health clinics that provide abortions; and the solving of the so-called Unabomber case.

After nearly two decades of fruitless pursuit, the FBI still had no idea as to the identity of the man dubbed the Unabomber, who had killed three people and injured 23. Then, in 1995, the bomber sent a letter to The New York Times offering to cease his terror campaign if the Times or the Washington Post would publish his 35,000-word manifesto against modern industry and technology. Neither newspaper was inclined to do that initially, but Reno, the daughter of two newspaper journalists, persuaded the newspaper owners to jointly publish the essay in the interests of public safety.

It paid off. The Unabomber's brother recognized the style and ideas in the essay and tipped off the FBI, ending the bomber's long reign of terror. Theodore Kaczynski, aka the Unabomber, is now serving a life term in a maximum security federal prison.

In 1995 Reno was diagnosed with Parkinson's disease. She did not slow down, but her hands sometimes shook so hard you could hear them knocking against the table at a congressional hearing. She even joked about the disease, claiming that "shaking sometimes helps," as in playing a steel drum or balancing her kayak.

That combination of toughness and self-deprecating humor, plus her determination to protect the Justice Department from improper influence, made her a hero to many who worked for her.

"Janet Reno led with her values," says former Deputy Attorney General Gorelick, the department's No. 2 official. "And that meant that if she decided that a certain path was the right thing to do, the people around her believed her and would charge up any hill behind her. ... I'd never seen that before in quite the same way." 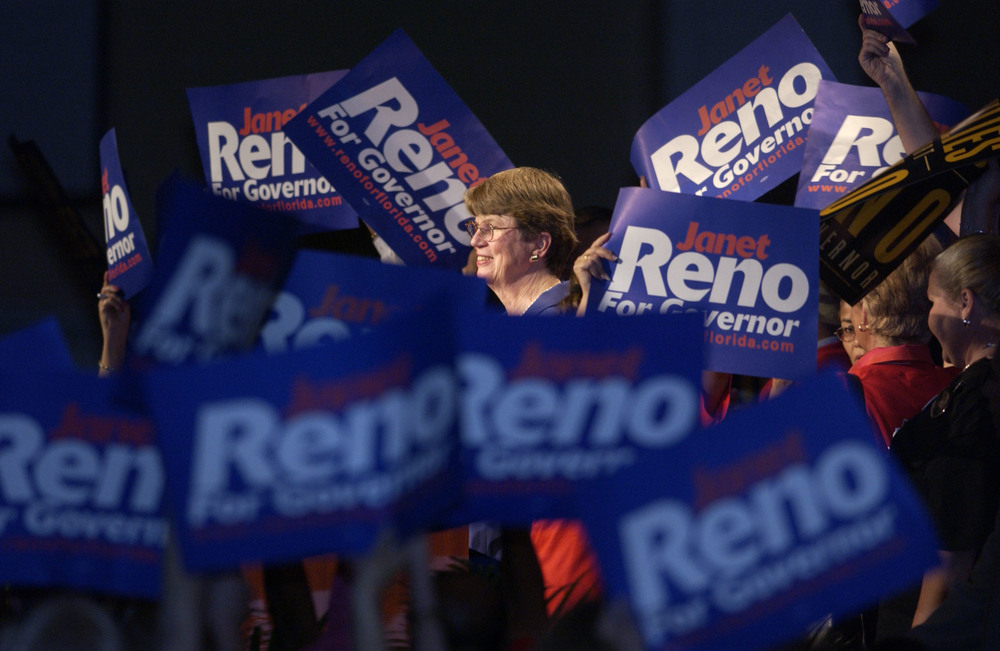 Reno won enormous respect inside the department as well, because of her work ethic and dedication to understanding issues in the many parts of the Justice Department — from national security, to environmental questions, to the generally obscure field of Indian law.

U.S. Attorney General Loretta Lynch called her "one of the most effective, decisive and well-respected-leaders in [the department's] proud history" who "never shied from criticism or shirked responsibility." And former Attorney General Eric Holder said that "in a city where too many compromise their values for short term political gain, Janet Reno stood out as a person of integrity and of enduring values."

Former Solicitor General Dellinger believes that Reno was prepared for the attorney general's job early in life by her intellect and ungainly height. "This is a woman that went to Cornell and Harvard Law School at a time when very few women went to Harvard Law School, went through junior high and high school being twice as tall as anybody else and probably twice as smart ... and that's really, really tough."

There were, of course, ups and downs in the eight years of Reno's reign. But she said she always took the long view of her job.

President Clinton made little secret of his frequent displeasure with Reno and the wall of separation she erected between the Justice Department and the White House. Still, he never asked her to resign. Reno was the last Cabinet member he reappointed after his re-election in 1996.

"It was actually quite wonderful," said Dellinger. "She just decided to stay, and it turns out that nobody could fire her."

The tension between Clinton and his attorney general was apparent even as Clinton's time in office drew to a close. In an interview with CBS News' 60 Minutes, Clinton went out of his way to praise friends and foes alike, but when it came to his evaluation of Reno, he was tepid, to say the least.

"Good woman," he said. "Tried really hard to do a good job. She's a good person."

"At least he didn't say I was a bad person," replied Reno, with a laugh. "I'll take what I can get!"

Indeed, by the end of her tenure, Janet Reno had outlasted her critics and earned such a reputation for integrity and independence that comedian Will Ferrell's parody of her became one of the iconic skits on NBC's Saturday Night Live. The recurring skit was inspired by reports that Reno had cut quite a figure dancing at a Justice Department party.

On the last episode of the "Janet Reno's Dance Party" parody, Ferrell, wearing a blue dress and pearls, reminisces about past glories and laments that the end of the party is near. Then, suddenly, the real Janet Reno comes crashing through the wall of the set, wearing the same blue dress and pearls as Ferrell, to deliver one of Ferrell's signature lines: "It's Reno Time!"

"I just dance," Reno replies, commanding the orchestra, "Now, hit it!" as she breaks out her best moves to "Twist and Shout." It was her last day in office.

After Kentucky's deadly floods, neighbors are stepping in to help one another