It's Decision Time In The U.K.: Voters To Settle 'Brexit' Question

It's Decision Time In The U.K.: Voters To Settle 'Brexit' Question

Today the United Kingdom votes on the so-called Brexit, or the possibility of leaving the European Union.

Polls opened at 7 a.m. local time (2 a.m. ET) and will close at 10 p.m. (5 p.m. ET). British citizens, including some who live abroad, are eligible to vote, as well as citizens of Ireland and Commonwealth countries who live in the U.K. or Gibraltar.

The votes (marked by an X on a paper ballot) are counted by hand, and official results likely won't be known until Friday morning.

During this vote, there are no exit polls that the general public can watch for a hint as to the outcome. Earlier opinion polls have indicated a tight race, while bookies say odds are the U.K. will opt to remain.

There's another way to keep an indirect eye on what's happening at the polls: watching the stock market.

While no public exit polls are being conducted, the Financial Times reports that some major financial institutions are paying for private exit polls to help them make money off the outcome.

Whatever their data source, as of Thursday morning, banks seemed to have faith that voters will choose "Remain."

"The [FTSE] 100 share index, aka the 'Footsie,' in London right now is up 1 1/2 percent," David Brancaccio said on Marketplace Morning Report. "Analysts read this as, in part, a bet the U.K. remains within Europe once the votes are counted." 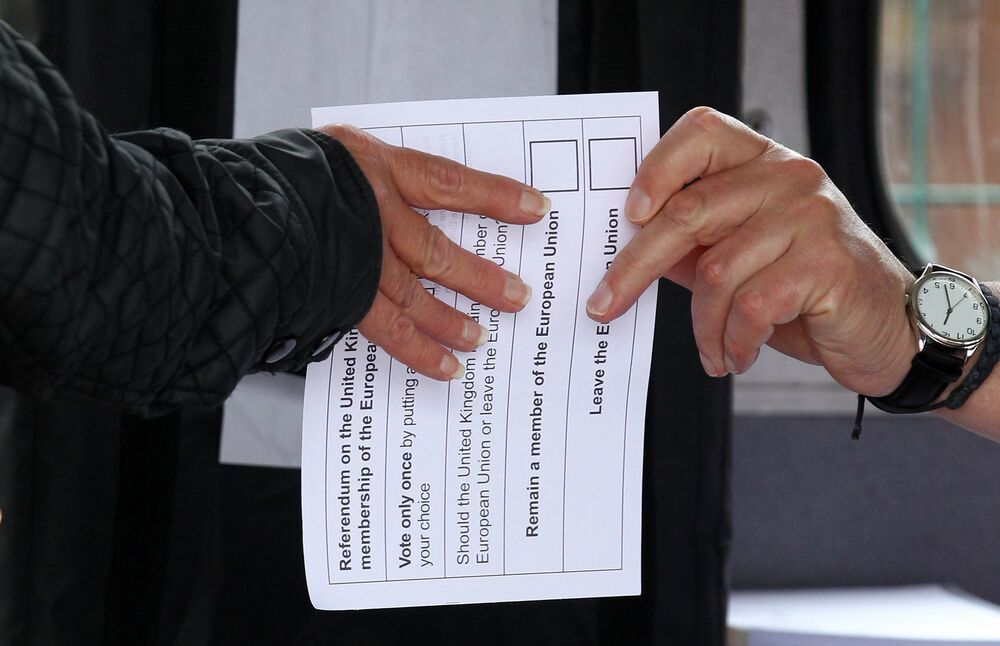 A volunteer hands an unmarked ballot paper to a voter inside a bus being used as a polling station in Kingston-upon-Hull, northern England, on Thursday.

While the vote is happening, people in Britain are legally prohibited from distributing information or taking actions that might influence voters.

Campaigning has stopped, and news outlets can't report on the vote — or on any of the issues intertwined with the vote, of which there are many.

"All we can talk about are what people are wearing and the weather," NPR's London bureau producer Rich Preston comments. "How very British."

Some suggest that even the weather isn't as neutral as it seems: Poor weather could suppress turnout, possibly aiding the "Leave" camp. So far, it's been sunny in much of the country, with heavy rains in the southeast.

Curious about what a Brexit could mean? Check out these pieces from NPR reporters and editors:

Why, Yes, There Are Cute Animal Pictures

You may have noticed that, during the U.K.'s fierce debate over the EU referendum, cats played an outsize role in the Internet discussion — with #CatsAgainstBrexit and #CatsForBrexit hashtags.

Now that voting has begun, the dogs are joining in, in a display of canine civic participation.

You're not supposed to try and influence voters outside polling stations. I keep telling her.#dogsatpollingstations pic.twitter.com/Q67fUCEhiu